GoPro x Alliance Wake Gear Guide – Is this thing on?

It’s more than obvious GoPro cameras have flooded our sports and changed the way we document and view them. What makes them extra unique in wakeboarding is the ability to roll up to your local park with a pro shop, buy a camera, and instantly be recording your riding. Multiply that by a few different riders with different perspectives and ideas – maybe riding doubles together, or one person rides while the other films from a drone – and the potential for creative collaboration increases exponentially. Gone are the days of one buddy in the group buying a big camera and trying to figure out how to use it so the whole crew can get shots. Now everybody can film – and instantly share – footage of each other with each other. In past Gear Guide issues we’ve given you ideas on types of shots you can get with them, different settings you can use to get different shots, and other technical tid-bits. This year though we mixed it up by issuing a challenge to several top pros. We created two teams of two riders, assigned them to a park, issued them a specific GoPro camera, and said, “Go get the best photos and video you can.”

Each team was given a double page spread in the Gear Guide to showcase their best work and they could do with it as they pleased: one big photo, several awesome action photos, etc. Read/watch on to see how the teams fared, what cameras they used, and ultimately who got the best pictures/video.

The wakeskate tandem of Brian Grubb and Dieter Humpsch were given the task getting unique shots with the Hero Session. Leave it to these two GoPro experts to do just that. You know when you bring Dieter – a GoPro athlete and creator of Noisia Vision – into the mix with Brian Grubb – a creative filmer in his own right – you’re going to get some awesome stuff. Both guys got creative with different ride-along and mounted shots. The ultra compact size of the Session really allowed them to do some different things, especially with Dieter mounting it right into the tail of his wakeskates.

“The Session is rad because it’s perfect for mounting onto things. The main thing to make sure of is having good light to shoot in. The Session doesn’t have the specs of its big brothers, but it still packs a punch and is really small and light. The first couple shots of Grubb are handheld with a pole while riding doubles. For some shots of myself I used a GoPro sticky mount and an extension. Normally the impact of landing will knock the GoPro around or completely off. Not so with a Session because of how light it is!” – Dieter Humpsch 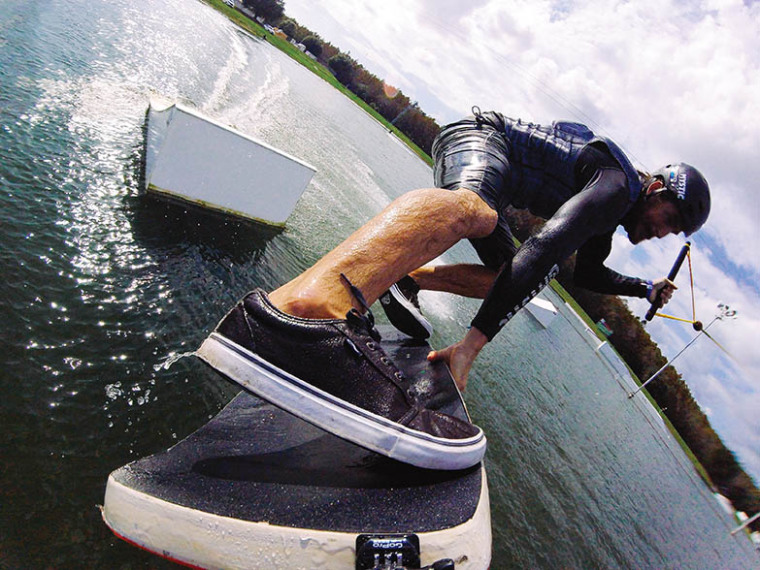 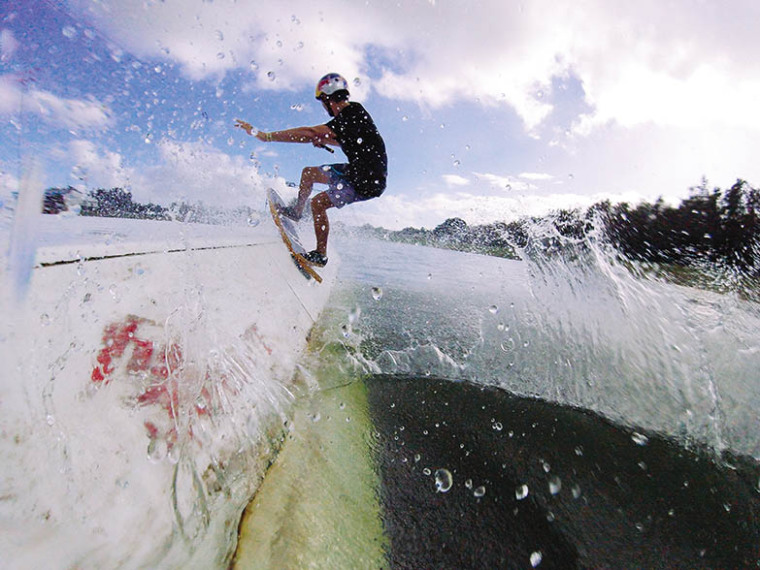 Team Delta Force headed to VIP with the plan of getting a shot of both of riders on the signature Kaesen UNIT rail at the same time. Over the past couple years Trever has simultaneously grown as both a legitimate professional rider and video filmer/producer. He regularly uses GoPro cameras to get unique shots for his videos, and while regularly riding/filming together, Josh has picked up a trick or two himself. Despite less than ideal conditions from Mother Nature, Trever and Josh came away with some solid images out at VIP, the premiere park in California. The guys used a combo of mounted/ride along techniques with stationary, set up shots.

“We wanted to get a photo we both could be in, but have it more up close and bring the viewer into the shot. The shot we actually got we used a helmet mount with a pole extension. We had to get the rope lengths right to get the right shot. The hardest thing was to get the photo when my grab was most poked out while Josh was in the right spot on the rail. The Silver made it easier to set up the shot because of the screen on the back. That’s my favorite thing about that camera; with the screen you can always see what you’re getting. I can hand the camera to somebody and know they’re going to have an easier time getting a good shot if they’re standing there filming. As a filmer myself it’s just awesome being able to get a camera this small, that is this user friendly, with this much power and quality in a water housing for a great price. It’s really cool that you can walk into the shop, pick up a new camera, throw it onto your helmet, set it up with the app in your phone, and go to work instantly! And always use a floatie!” – Trever Maur 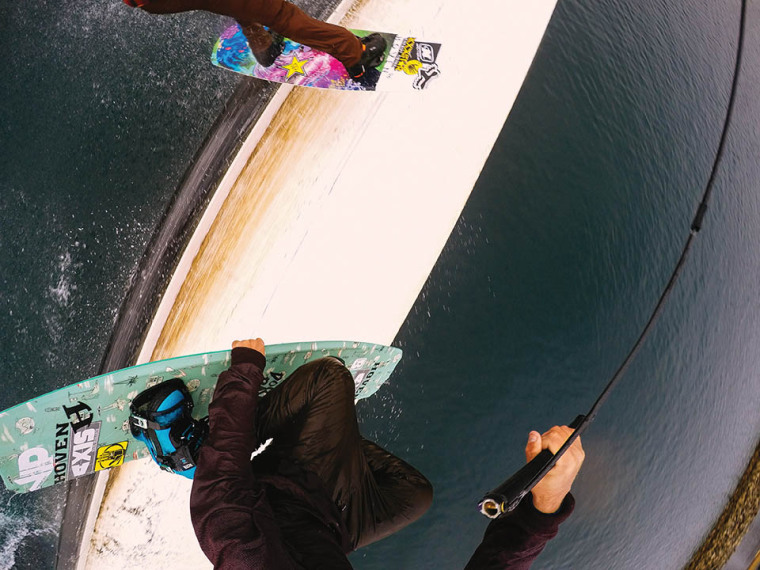 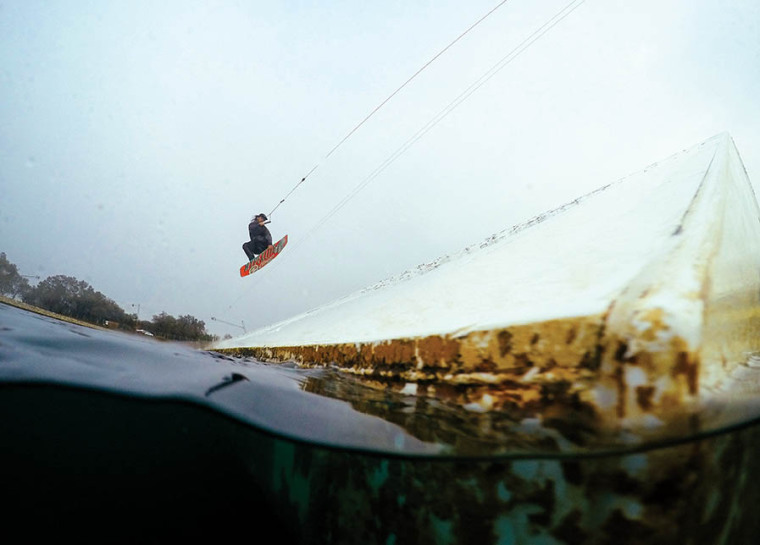 As you might have learned recently, newly anointed Alliance Rider of the Year Aaron Rathy is also quite the filmer/producer himself. He’s been flying drones with GoPro cameras for a couple years and become an expert. With Kevin recently making regular GoPro edits at his private park, it was a perfect opportunity for these two to Canadians to get together in swampy central Florida and see what they could come up with. Aaron and Kevin wanted to utilize the symmetry of Area 52’s staircase gap and get a photo of both of them on the recently-installed down-flat rails. To get the shot Aaron mounted his Hero 4 Black into his 3DR Solo drone and had it hover over the staircase. After a few attempts Rathy stepped out of his bindings, picked up the 3DR remote, landed the Solo and reviewed the shots. It took Kevin and Aaron about ten hits to get this shot where they are going up into the top pond.

“The thing that stands out to me about the Hero 4 Black is the ease of use. It doesn’t take much to get really good shots from it. Kevin hasn’t had a ton of experience filming yet, but he’s gotten some great shots while we’re working on the video. All of the mounts and ways you can shoot with the camera make it a lot of fun, too. There are countless unique shots you can get. For the video we can use all the different frame rates the Black offers and get some really cool clips that work well together in the final edit.” – Aaron Rathy 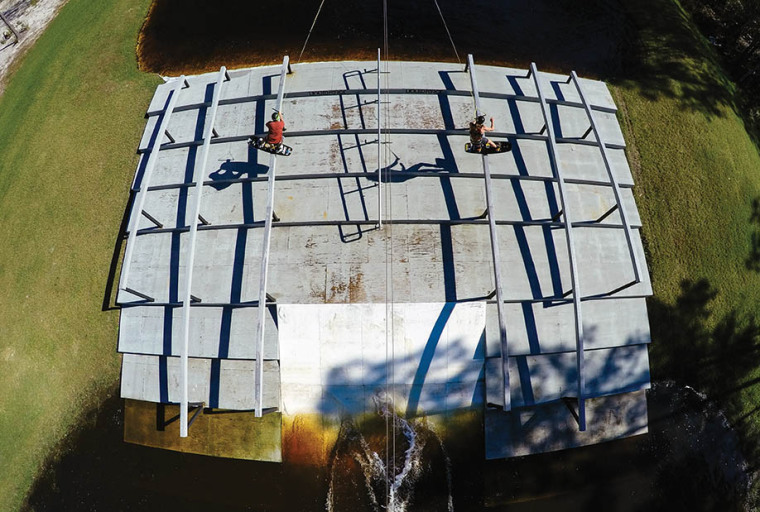 GoPro x Alliance Wake Gear Guide – Is this thing on?