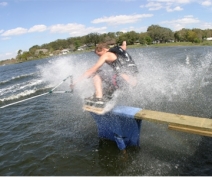 Sometimes things don’t go as planned. But despite all the odds, the Alliance High Ollie contest finally went down on 3/11. Orlando’s finest were in attendance and there were only a few (hundred) complaints about the high winds that decided to show up at Parks’ house for the contest.
The day started off with the wakeskate event where the general consensus was, why bother setting the bar low? That said, only one rider, was able to clear the 26 inch starting height. Even reigning champ Aaron Reed came up short, clearing the bar on his last of three attempts but washing out on the landing. But arguably the 9-man spectacle was the most exciting part of the day, because as the wakeboarding would soon prove, watching people make it wasn’t nearly as exciting as watching them crash.
The other issue with the wakeboard ollie contest (which I’m going to refer to as the bunny hop parade because it’s not really an ollie when the thing’s attached) was the concept of raising the height using cases of Red Bull. See, ‘cause even with a clever roping system, constant bashing with wakeboards had soon spread the cans all over the lake. It took a lot of duct tape and the tenacity of Keith Lyman, (the first rider to go and set the bar relatively high with 3 cases on top of the 26-inch plank for 42.5 inches total , riding switch) who ran out to reset the cans every time they were knocked over to keep things going. But eventually the duct taped cases were replaced with less breakable objects and things started to speed up. But the contest was basically over before that happened, when one of the up-and-comers cleared 4 cases a total of 48 inches. For the rest of the day, no one else was able to clear four feet and the winner is now the proud owner of a new deluxe set of poker chips.
Pick up the June issue of Alliance Wakeboard for the whole story and fantastic images.