Splendor in the Twilight 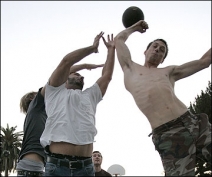 While I’m in California working on the new TV show, I’m always trying to think of new ways to boost the team’s morale while working into the wee hours of the night. Most of the time our morale booster is surfing which lets us take a break in the middle of the long days. But surfing always ends up being about getting your own wave, so yesterday I figured it was time to switch it up a little with some team sports activities. I went to the Sports Authority and got a basketball and asked the staff if they wanted to play a little hoops. Much to my surprise everyone in the office was totally for it. What was even more surprising was the beauty and gracefulness shown on the courts on this cool October evening.
The teams got split up and the ballet began. I was completely blown away by the moves that were being thrown on the court. It was like nothing I had ever seen before, in fact, it was like nothing anyone in the WORLD had ever seen before. These were moves that were so original and unique that no one in their right mind would even attempt to try them. Words can not explain the excitement I felt being able to witness such progression in a sport by a bunch of would be amateurs. I would even go as far as to say we have created a new sport, and its name is ballasketball. Ballasketball is a unique combination of the sport of basketball and the art of ballet. It can only be described as the most unique combination since the French fry was dipped into the Wendy’s Frosty. Needless to say, you will be seeing more of this amazing sport in ballet halls, on Broadway or at your local playground, but for now we have the first documented pictures of this beautiful creation we call ballasketball.