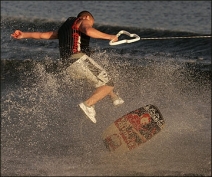 Silas Thurman was in town last week crashing with Travis Propst, Steve Schoenhals and Brian Reeder out on Clear Lake. Shredding was the name of the game for Silas. That’s normally the case for Schnoodles, too, but his left foot was as purple as Barney’s balls (and fat, too) after a little skateboarding mishap. Silas, on the other hand, is in fine shape and already busy preparing for the summer of ’06. He and Collin Wright have already finalized plans for the second annual Hippodrome contest in Oregon … okay, tangent time — I just typed in the word Hippodrome totally expecting it to get the red, squiggly line underneath it indicating it’s not a real word. But there was no such line of incorrect indication. So I looked it up in the Microsoft Word dictionary and here’s the meaning:

Pretty cool, huh? The Romans would be so proud of Collin and Silas.
Another venture Silas is currently working on these days is his new gig as wake team manager for Nike 6.0. Nike is branching out into the wake industry and you can already see the likes of Silas, Kyle Walton and Schnoodles rocking the shoes while wakeskating, plus Collin while he does a bit of everything. Nike 6.0 really wants to help develop the sport for the long term and is not coming in just looking to sponsor the guys who already have big names for themselves. Actually, if you want in on the program you’ve got to be a grom – 15 or under, I believe. Pretty sweet deal for you up-and-comers, I’d say. Plus, the shoes are sweet looking – Silas made sure I checked out a few different pairs while hanging out. So be on the lookout in the future for more Nike involvement and for more chariot racing in the Northwest.