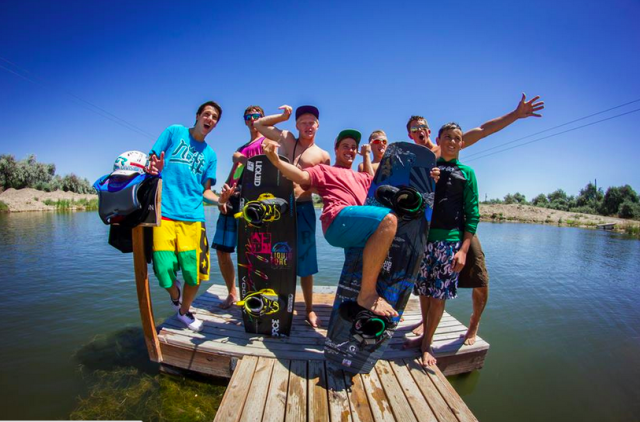 Even though I’ve been on the LF team since ’96 I was yet to experience the glorified Liquid Force Trip Across America tour. Yes, this was more of a reincarnation then a recreation, but the vibe was still the same….stoke heavy! Anyone that knows me can attest to the fact that coming in contact with my people of wake is my number one goal. No social media post, video, or any other form of secondary contact can equate to meeting someone face to face, and that is what the Liquid Force TAA was all about to me.

My journey started at Wake Island Watersports in Sacramento, I was accompanied by the Left coast LF crew, Chris Patterson and Ryan Schuppert, the first stop was a blast and a tone setter for the rest of the trip. From California’s only full size cable we made our way to the Delta, California’s staple in wake! Every location had a new theme, for the Delta it was toeside wake jumps. We got rider after rider to land their first toeside W2W thanks to the driving of Schupe and some helpful advice from Grant Roberts and yours truly. From the dirty D we headed over to Utah (picked up Don Wallace aka DSWduck on the way. Note: Don W is a big time fun contributor), after a couple more dealer stops and the Monster Wake Up contest we were all sold on the enthusiasm and heart that  the Utah boarders had for wake!  We want to thank everyone that helped make our West Coast portion of the LF TAA tour amazing and we can’t wait for next year! – Bob Soven

It was good to have the trip across America back, I always thought this was such a good way to interact and become close with other people that are just as passionate about wakeboarding as I am.

My section was Arizona and Utah and I couldn’t of had a better crew of people. Strat and I went to six different lakes in the ten days I was there and every stop was full of people hyped up to ride. We had a new boat each day from each dealer that we stopped at, Strat and I had all the new LF gear for everyone to try. We finished off at good old Lake Powell and there happened to be a cable contest going on and I took the win. Closing off the trip we got to take a cruise around Powell which was beautiful and in my opinion one of the coolest lakes I have ever been to hands down!  With that being said, I hope to see everyone at the next trip across America and can’t wait to find out where I will be placed! – Kevin Henshaw