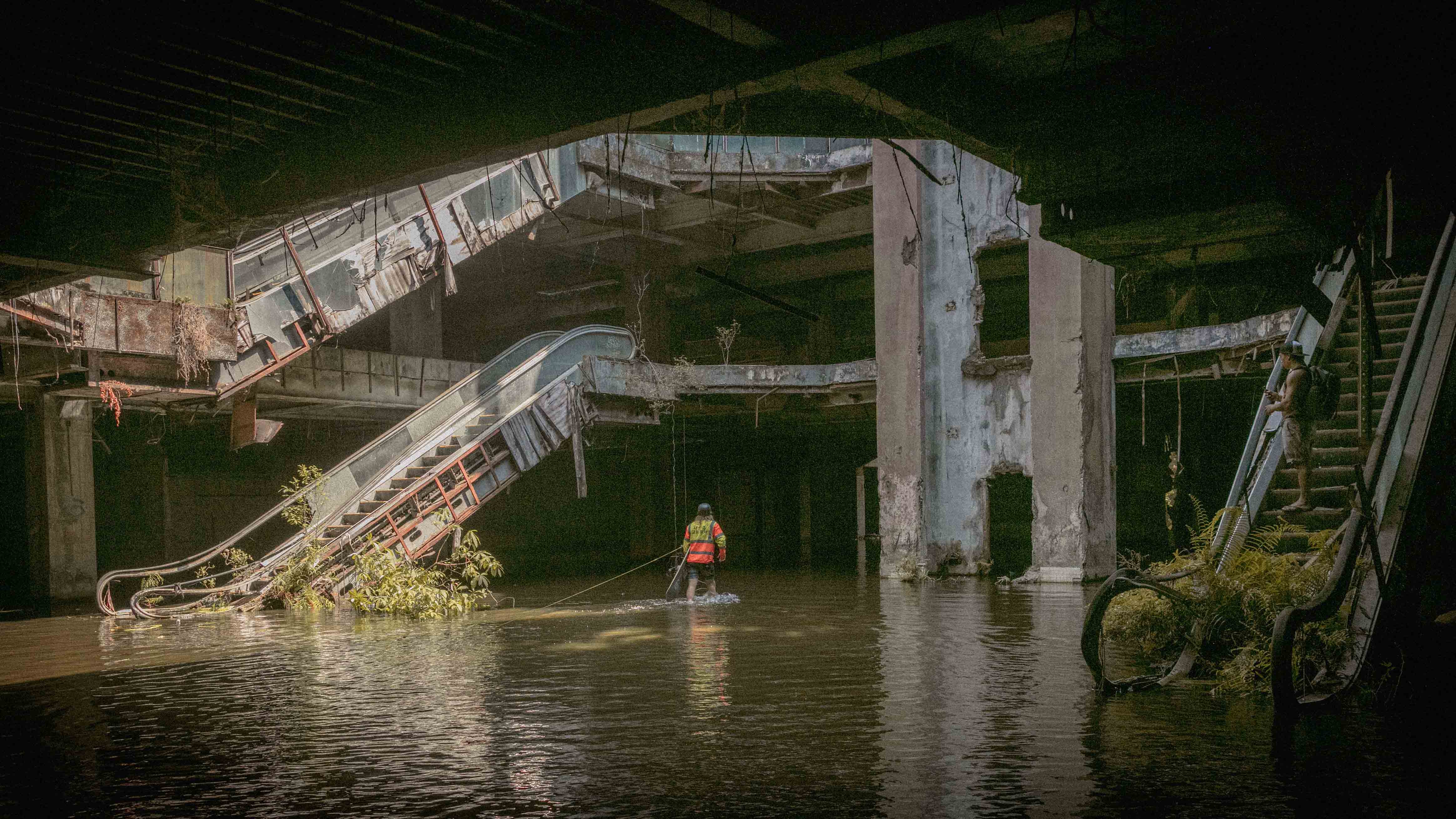 Not your ordinary winch spot

When I found out I was going to be able to spend a few days in Bangkok, I called on the homie Victor Salmon and asked him to have a think about something cool for us to shoot. Straight off the bat he said, “There’s an abandoned mall that’s flooded, I wanna winch it.” I didn’t even need to see the Google image screenshots that followed the conversation to know that this was going to be a dope spot to hit. We all know Victor — if goods need to be brought, he’s definitely bringing them.

“Declared off-limits to the public for safety reasons”

Just a few blocks over from the infamous Khao San Road in the centre of Bangkok, New World Mall was built in 1982, but was permanently closed only 15 years after its opening due to a myriad of issues. Apparently the owners of the mall had gone ahead with a seven-story extension when they’d only been given planning permission for four. After realizing what was going on, the Thai government was quick to order the demolition of the illegal extension. The demolition went ahead in 2004 and the remaining four stories were left exposed and abandoned with no roof. Anyone who’s experienced a rainy season in Asia would know this enclosed space wouldn’t take long to flood and when it surely did, the stagnant water covering the mall’s 500 meter ground floor became a breeding ground for mosquitoes. This proved problematic for the locals, so in efforts to fix the issue, fish were released into the water and the pond became quite the tourist attraction. Vendors even began selling food for tourists to feed the fish. Following an increase in media attention to the mall and the unusual fish habitat, the government was pressured into removing the fish (which had reportedly multiplied to over 3000) and declared the building off-limits to the public for safety reasons. 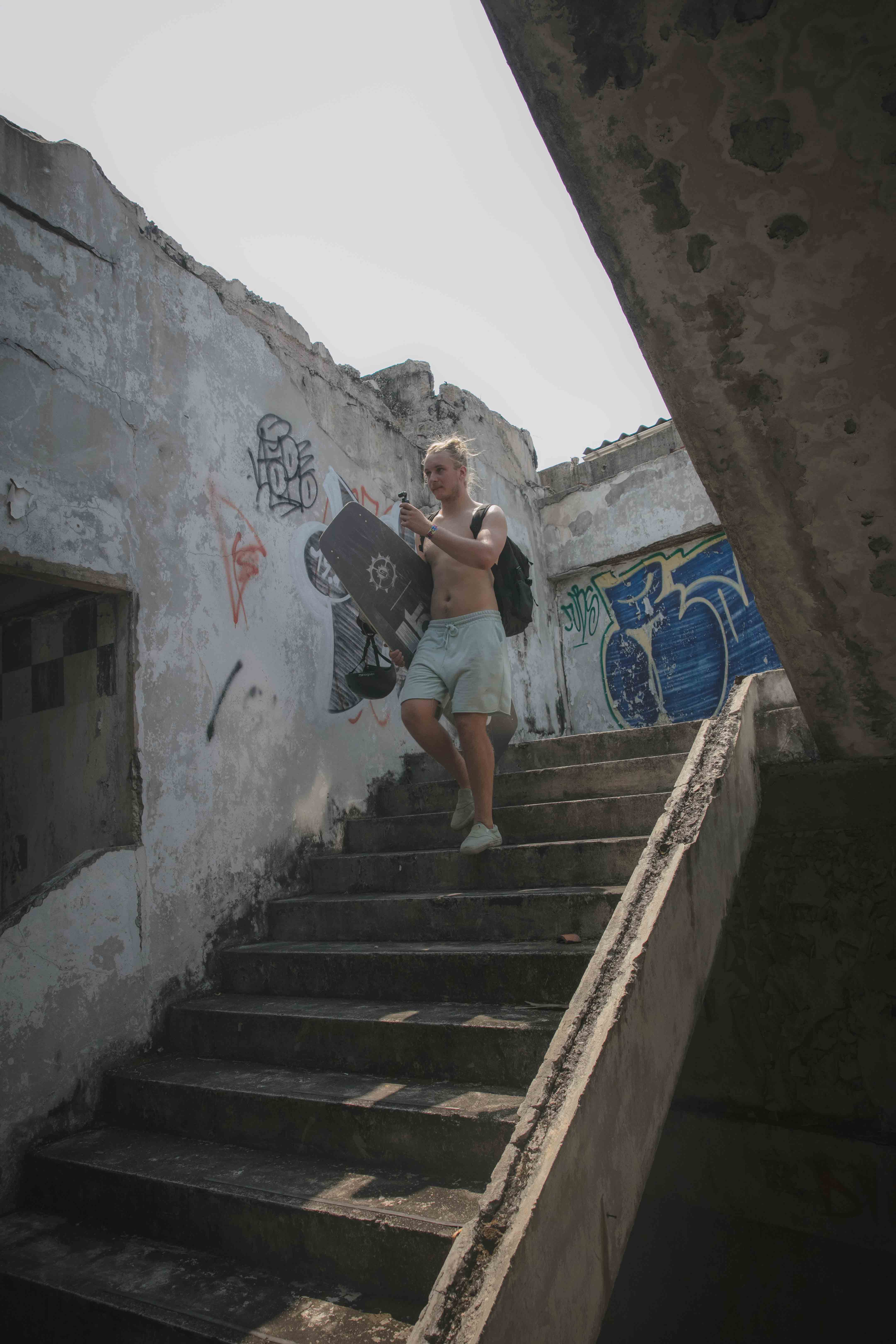 Loyal to the Vlog life 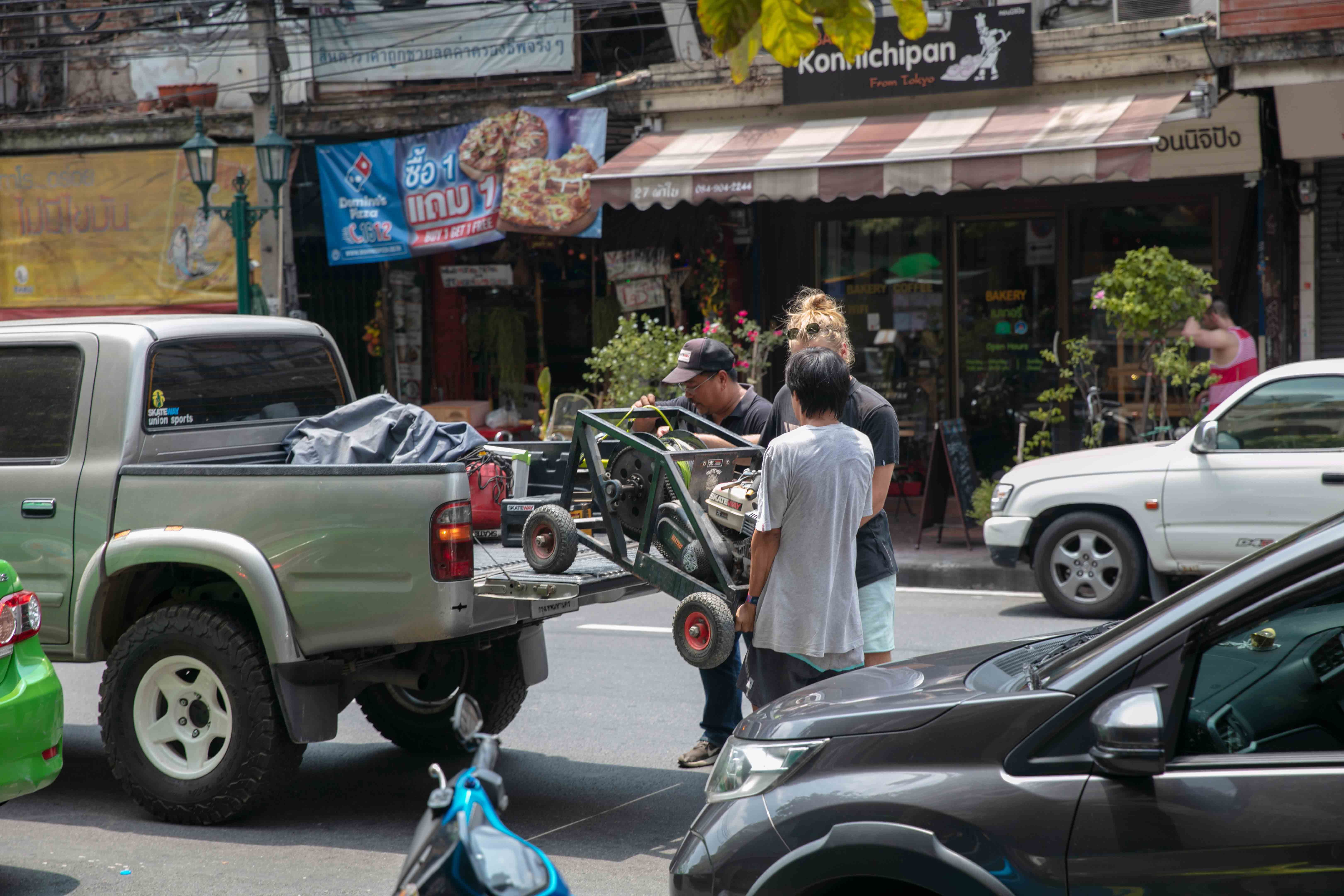 Load up. Time to winch!

Victor and I had gone out a few days before the shoot to scope the spot; as we’d be pulling together a fairly large team to help get the shot we wanted to make sure it was as seamless as possible, so working out routes to haul the 110-lb. winch in and out of the building was important, as was knowing what we wanted to shoot, where we wanted to shoot it, and what time of day we needed to be there to ensure we got the best light. Obviously, a lot of moving parts had to come together to make this shoot happen. 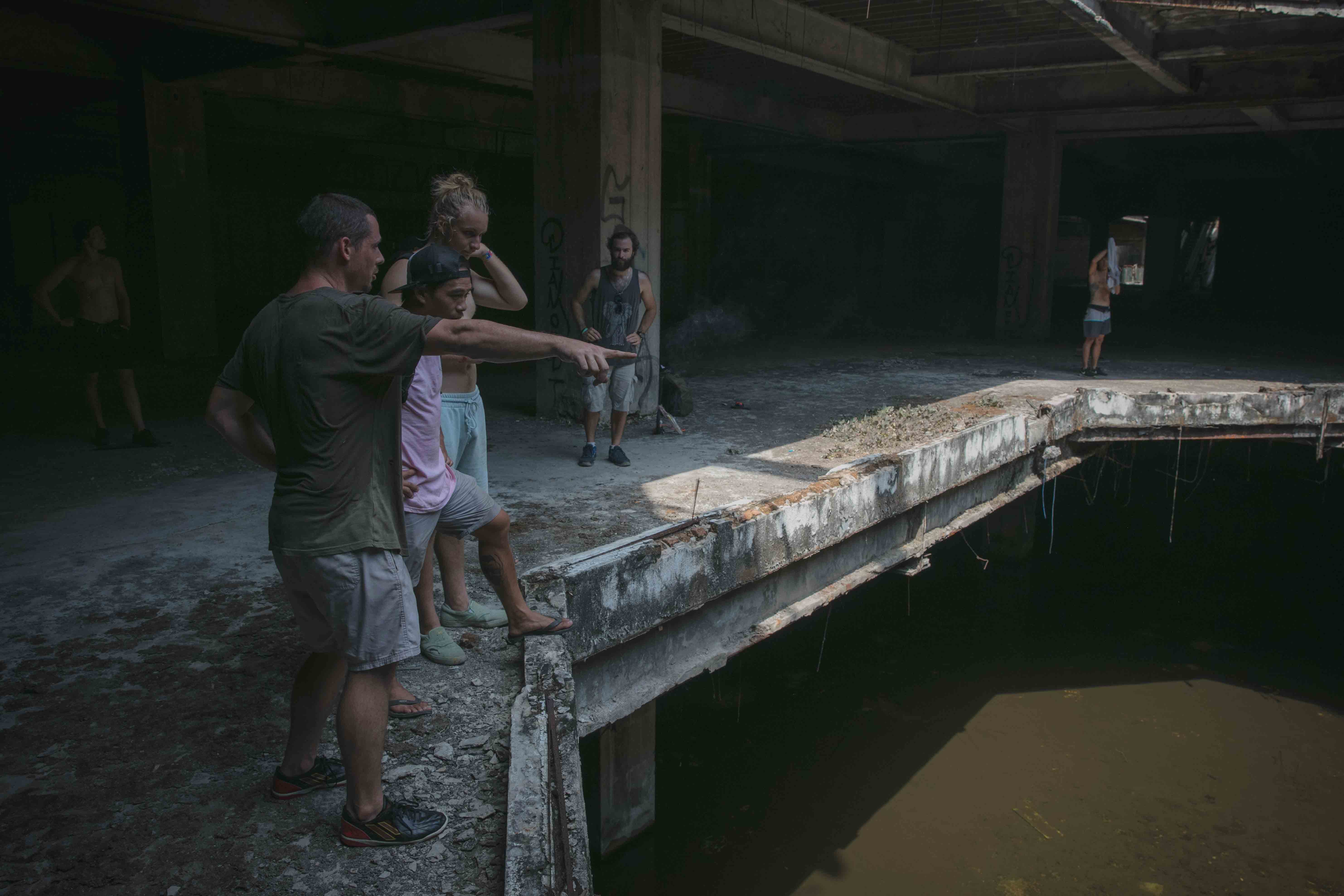 Gotta scope it before you ride it 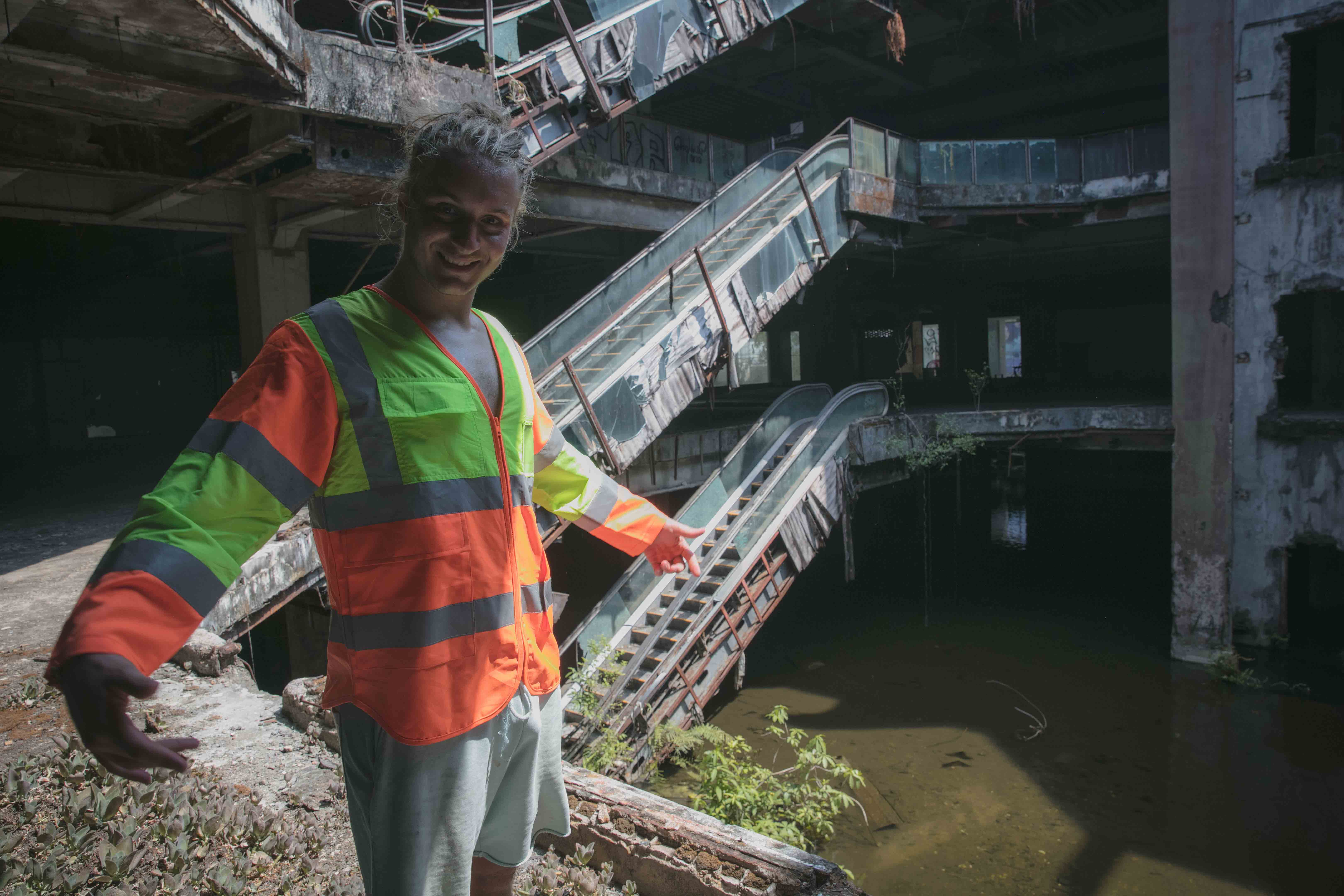 “Getting in was the hardest part”

When we arrived, we walked around the perimeter and found a hole above a wall about 15 feet up. A policeman saw us just as we were walking over and told us we weren’t allowed to be there and moved us on. We decided to do a lap of the building and come back in the hopes that he’d patrolled off, and fortunately when we returned, he had. Some metal debris was propped up against the wall acting as a sketchy makeshift ladder, presumably left by some of our previous trespassing allies. We were able to climb that and then onto the entwined roots of a tree crawling up the side of the building, which then led us to the hole in the wall which we were able to clamber through to get inside. With shoot logistics running around my head, I knew there was no way we were going to be able to lug a 110-lb. winch up a wall and through the hole, all without being caught in the act by the patrolling security. No, we were going to have to find another way in. 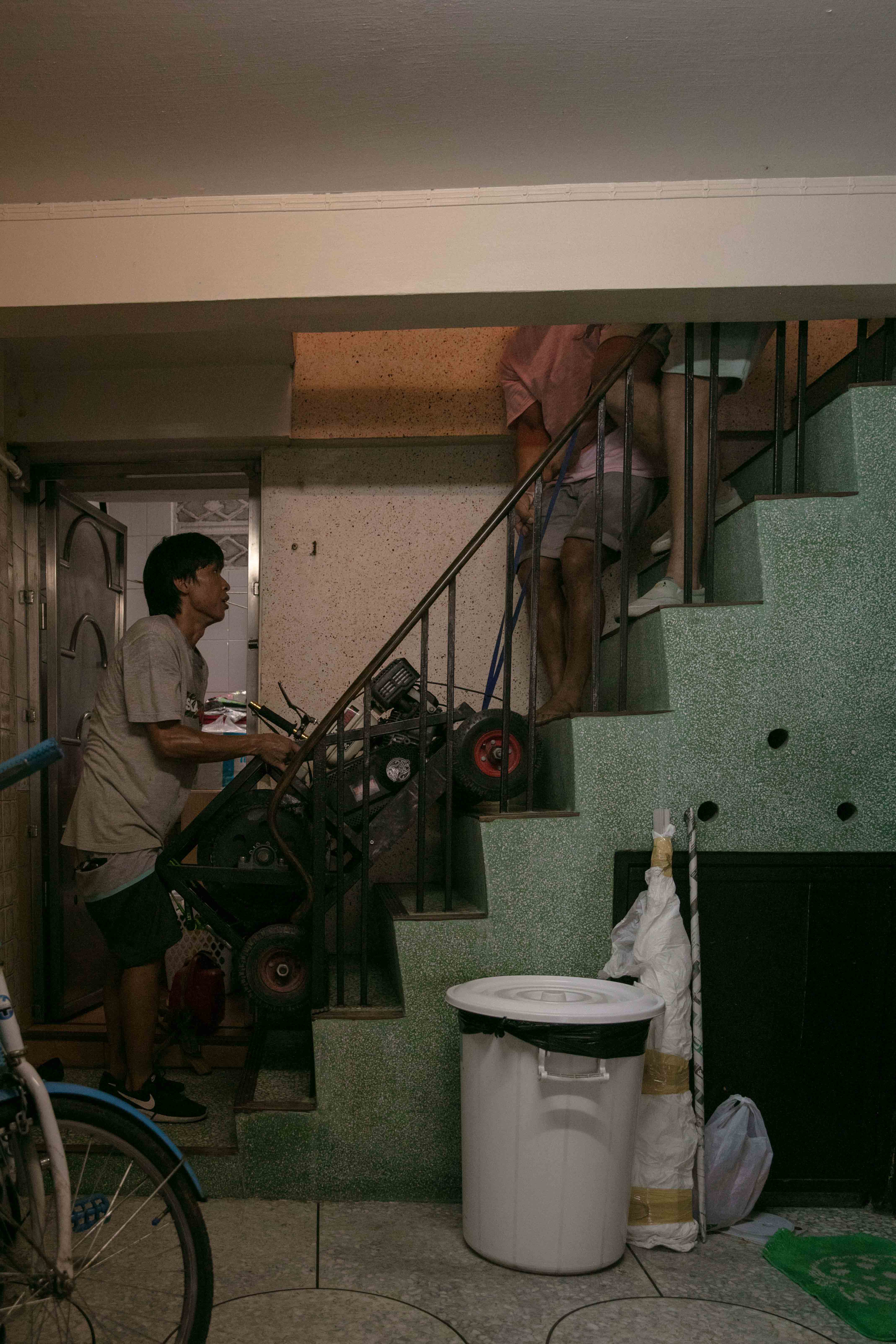 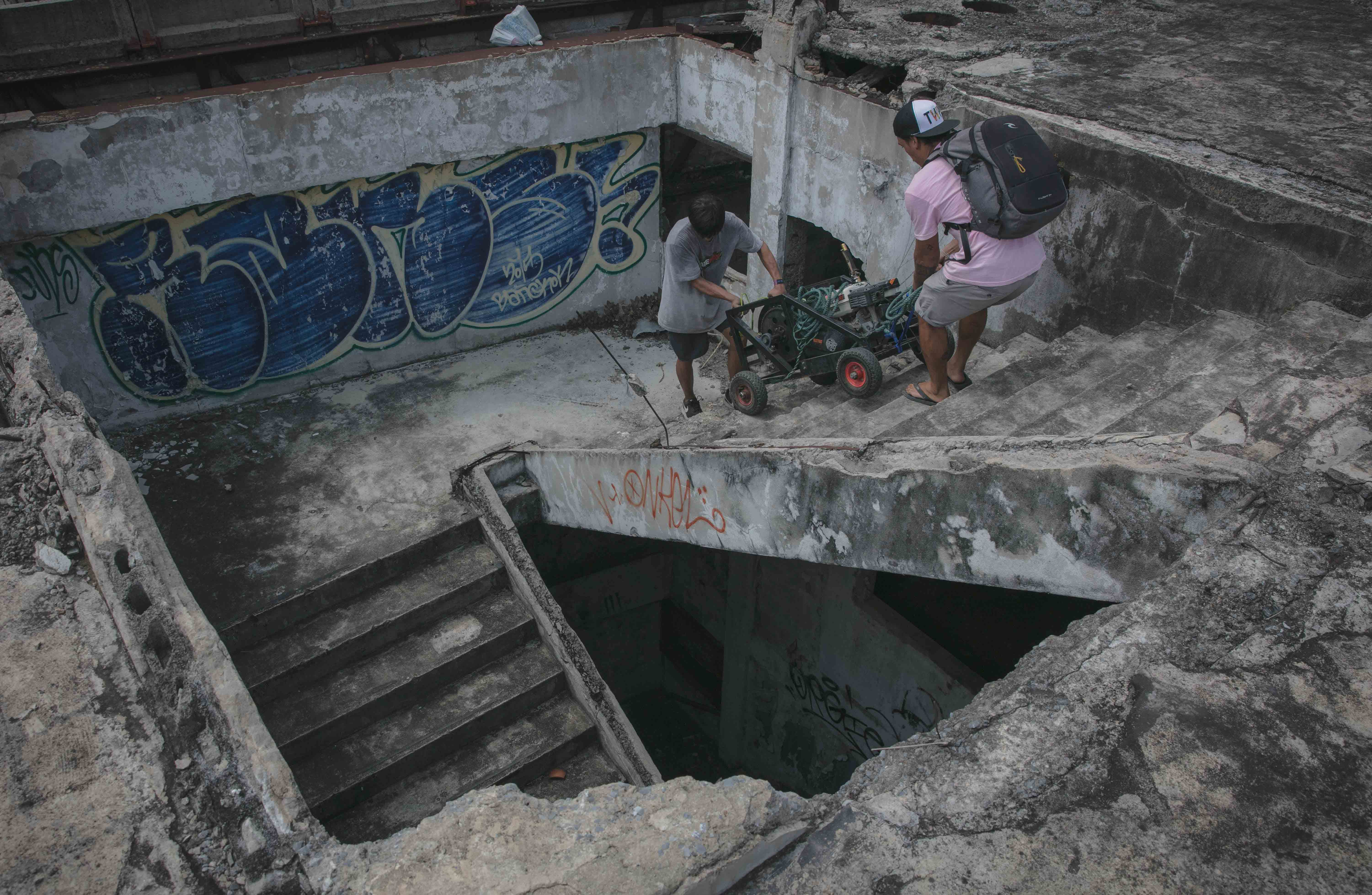 A winch, some stairs, and the Thai heat are NOT a fun combination 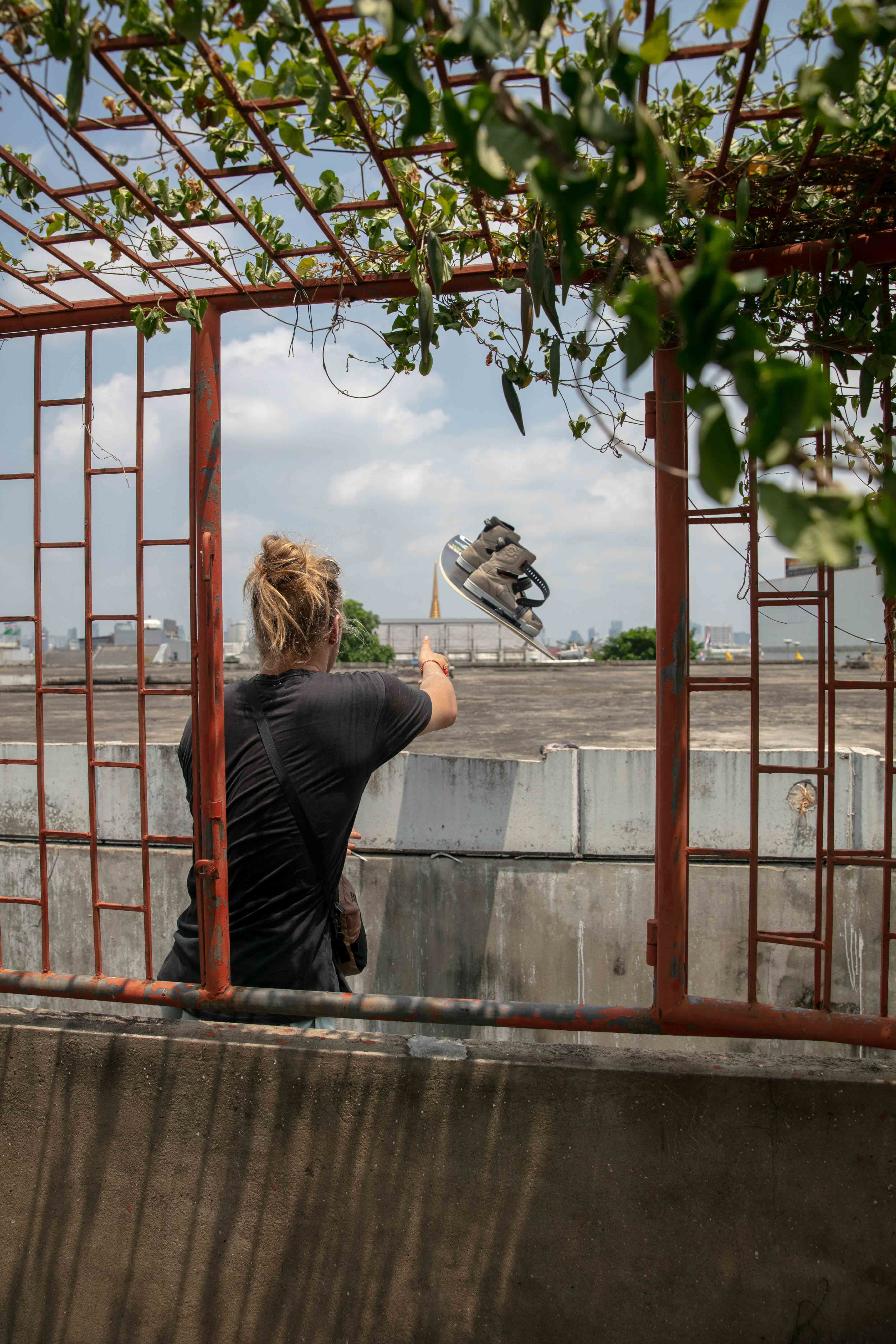 “One wrong step and it was certain death”

Fortunately, Victor knew the owner of a hostel that backed onto the mall, and his roof was the same height as the top level of the mall, with a mere 10-foot gap separating us, and a sheer 80 foot drop below us. One wrong step here and it was certain death. I could even see that Victor, one of the world’s most fearless wakeboarders, was visibly aware and rocked by the risks we were taking to get this shot. Bets were wagered over jumping across but I’m glad that wasn’t attempted otherwise it could have been a different tale I’m telling!

With some loose plans for access arrangements made, we scoped the location and had an idea of the shot we wanted. It seemed as though we’d planned this just as well as we could have. Needless to say, the hype was real in anticipation of the shoot day. 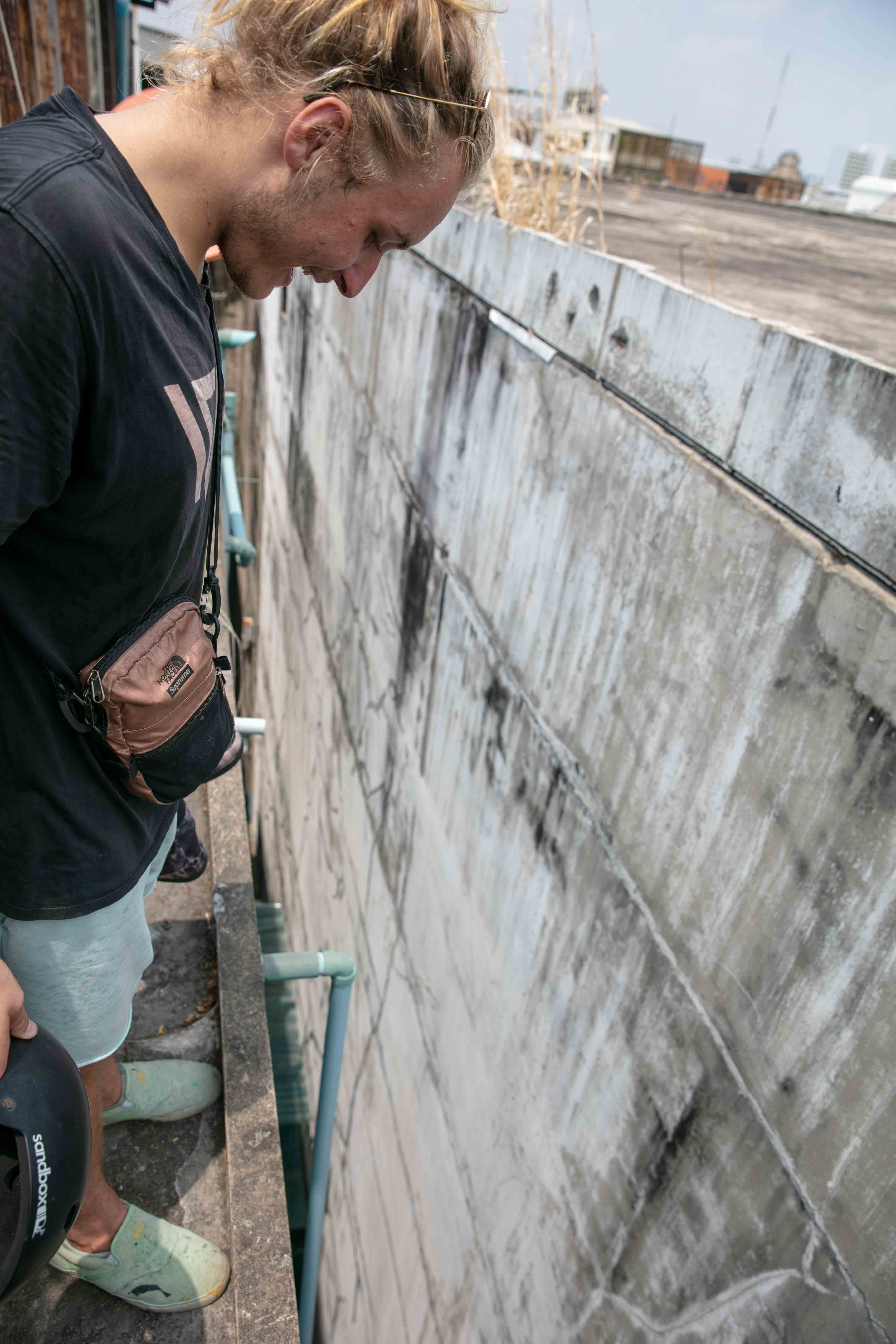 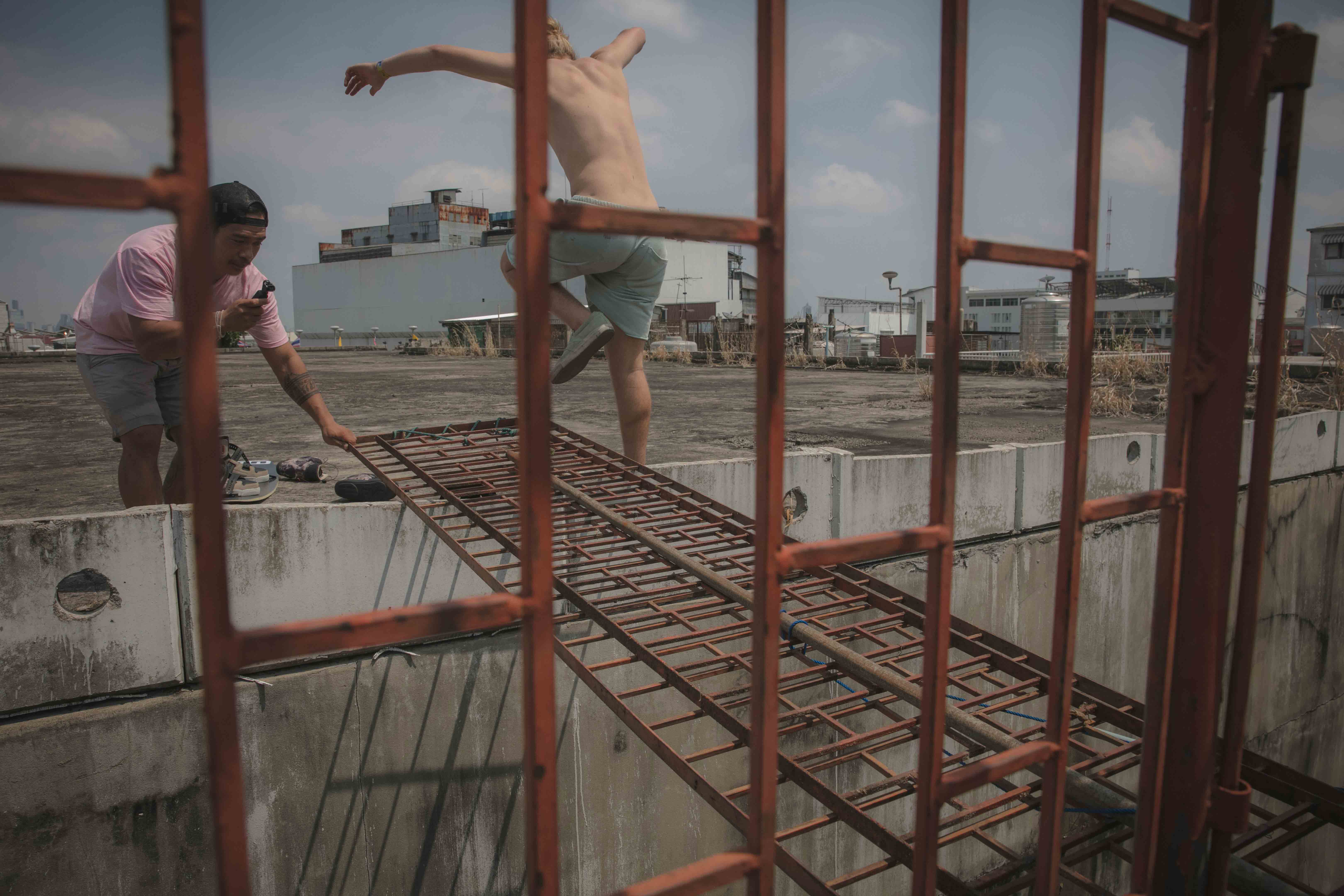 Victor overcoming his fear of heights

Like any other day I’ve experienced in Bangkok, it was swelteringly hot the day we went to hit the mall. With the thermometer getting up to 104 °F and humid as Hell itself, it really was a humdinger of a day.

We jumped in a taxi to get into central Bangkok where we met up with the SkateWay crew at the hostel next door to the mall. We then proceeded to haul the winch up the six flights of stairs onto the roof. Once up there, all of us drenched in sweat and panting for some less humid air, we started building the makeshift bridge we needed to get us across onto the roof of the mall. Using some of the spare iron bars we found up there and a bit of rope (for added “security”), the bridge was quickly built to a level of quality we all, for the most part, deemed safe enough to cross.

Once all the crew had made it across the gap, along with the winch, we had the slightly easier task of getting the winch onto the ground level inside the mall and setting up for the shot. This was the first time we had actually waded in the potentially infectious water and it quickly became clear how much debris there was in the water and exactly how shallow it was. It couldn’t have been more than 15 cm deep, and we could now see rusty bits of metal poking out above the water level all over the place. Bangkok hadn’t seen rain in over a month, and since the pond we were winching relied entirely on rain water to keep its identity as a pond, we weren’t left with much to work with. Fortunately, as you can see in the images, there was just enough to ride in, you just didn’t want to fall in it.

We got two pulls in without interruption. Victor was able to slash through the shallow expanse of water, cutting from side to side and throwing up a nice bit of spray while he was at it, and I was able to snag a couple of different angles of him doing it. As Victor was strapping in for pull number three, an angry, authoritative Thai voice echoed around the empty shell of the building, and even before the native Thai speakers amongst us translated the shouting, I knew our time winching in the mall was up. We were told we needed to leave and the police were being called – going into this I was very aware that we were breaking the law by trespassing, in a foreign country, and a country I definitely wanted to avoid spending any time behind bars in. I was sure we wouldn’t have much luck talking ourselves out of the situation with the Thai police, so it was best to ensure that didn’t come down to that. We hot-stepped it out of there with our tails between our legs, absolutely exhausted, but satisfied to have gotten the shot we had in mind going in. Fortunately we didn’t need to exit the same way we had come in, as the guard demanding we leave had opened some shutters to get in himself and he let us leave the way he had come in.

What remains of the New World Mall has got to be hands down one of the coolest urban winch spots worldwide, and it’s safe to say we’ll be back. Next time however, we’ll be sure to grease a few palms, bring a kicker, and with the blessing of some more rain water, you can be sure when we get back to this epic environment, we’ll be doing much, much more than just ripping through it. 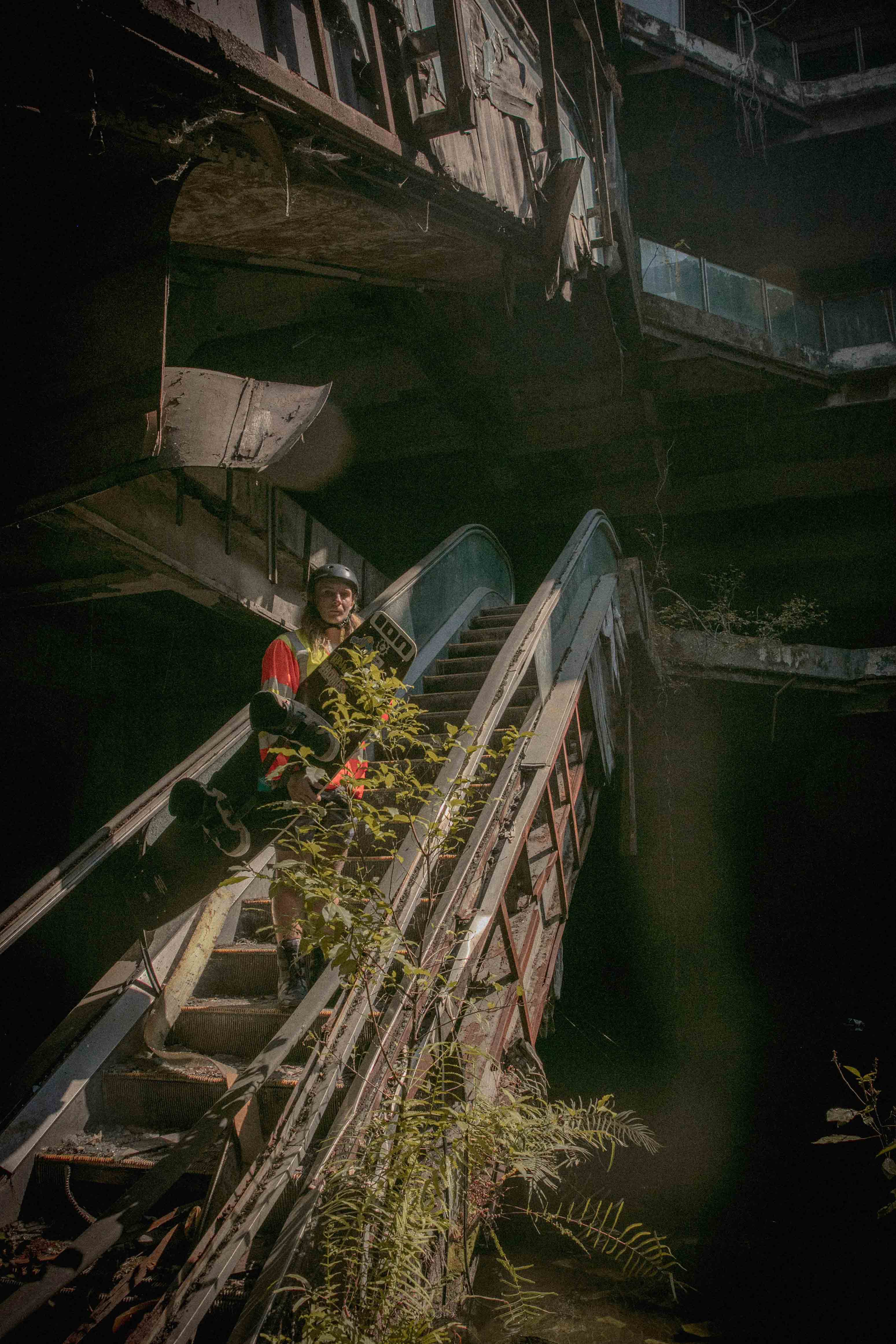 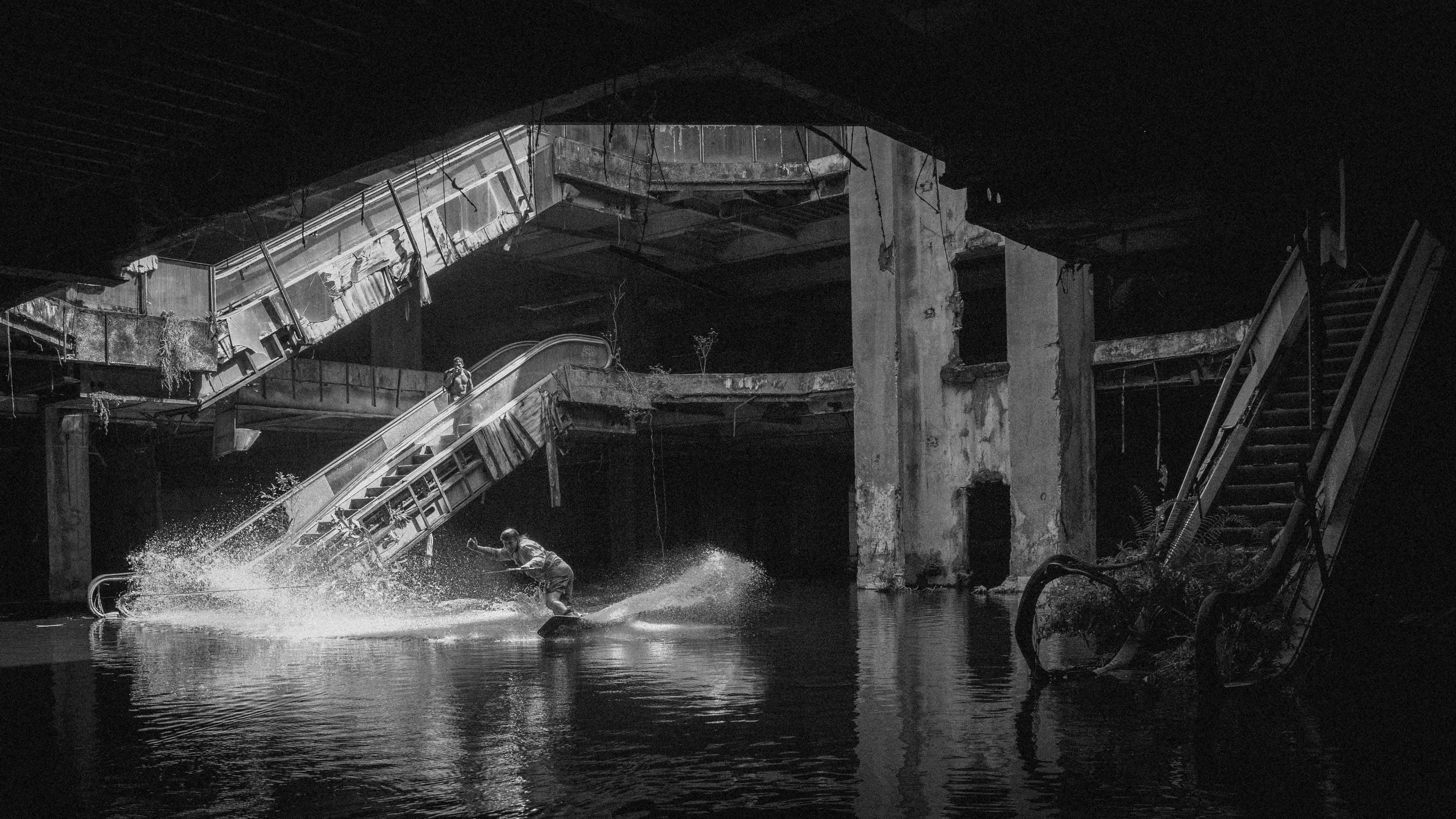 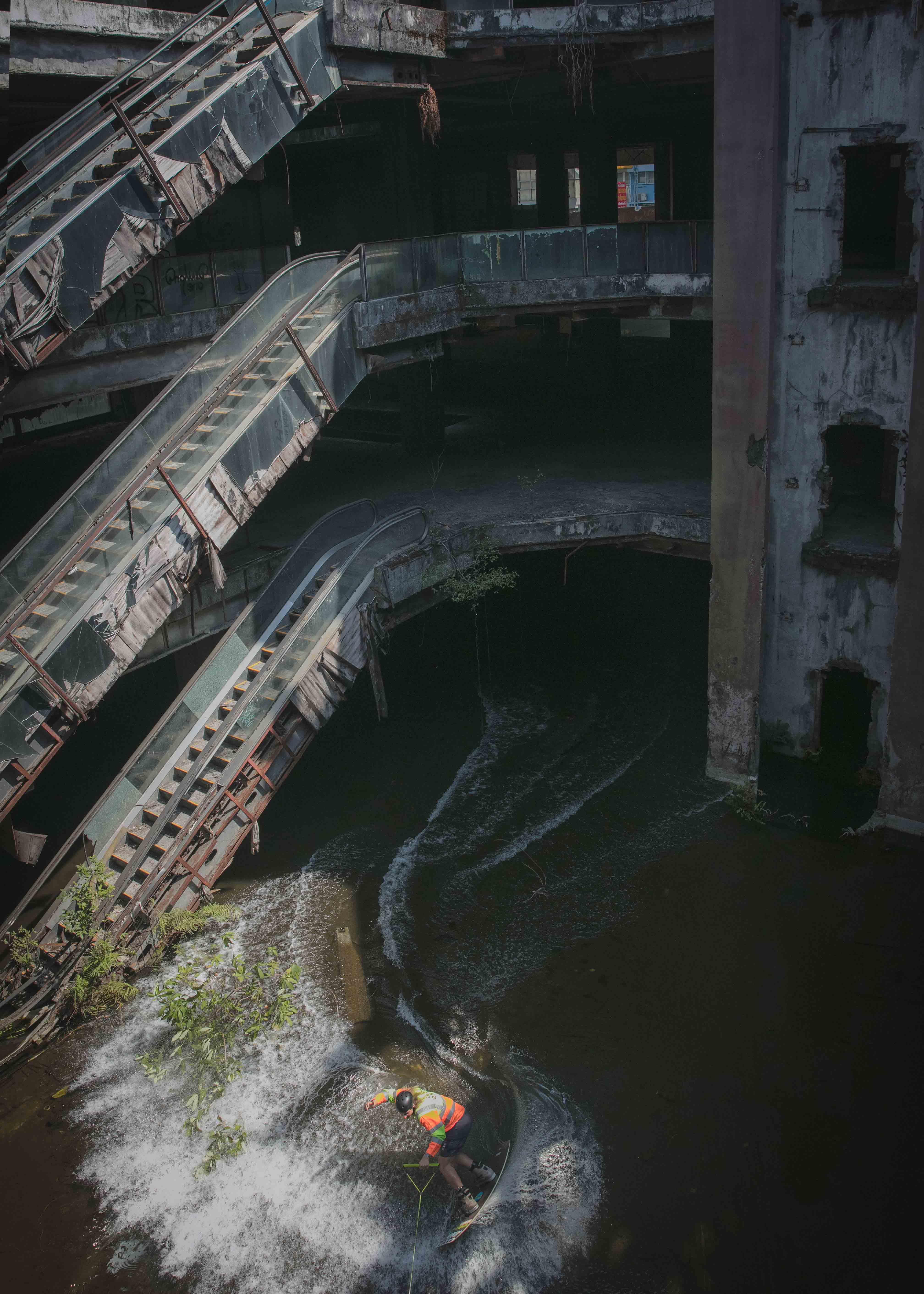 All that work for two pulls. Worth it. 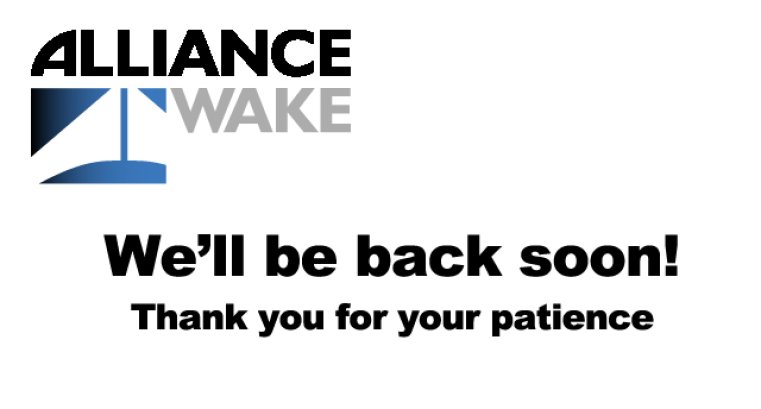 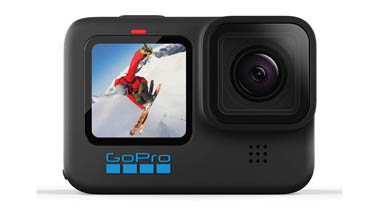 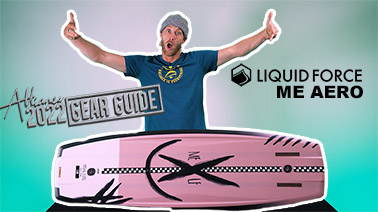