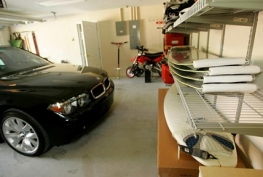 A: So you and Danny Harf bought this house together?
Rusty Malinoski: Yeah, we did. We had been looking around for a while for a place to buy in Orlando, but everything is getting pretty out of hand there so finally the next closest place was Clermont, which was about 20 minutes from where we live now. It’s not that far, so we’re not too worried about being farther out.

A: It might be a good thing to get out of the daily grind of Orlando, you know how sometimes things don’t get done when everyone is around all day.
RM: Yeah, I don’t mind at all. It’s obviously going to be a change of pace only going out in the boat with a couple of guys as opposed to having it full all the time, but maybe that’ll be a good thing. We’ll probably be able to get more done.

A: So you split everything down the middle?
RM: Yeah, it’s kind of a house that neither of us could really afford on our own, so this was a good solution. Danny already has his house on Hiawassee. It was really expensive but we figured we could make it happen if we both went down the middle on it.

A: Do you have a list of chores that each person is going to be responsible for 50/50?
RM: Yes, the chores are being split 50/50. Right now we’re doing some reconstruction upstairs, putting another master bedroom in. We’re just busy tearing down walls and reframing shit, so that’s the big chore right now.

A: Do you think you’ll be wakeboarding more or less out there?
RM: For sure more. I don’t think anything else is going to change besides that. We didn’t really do it for that purpose, it was mostly for the investment.

A: What’s Danny going to do with his other house?
RM: He’s going to keep it and rent it out to Chad Sharpe and some guys. With the amount of stuff happening in that area that house is going to be worth so much money for him in the next five years.