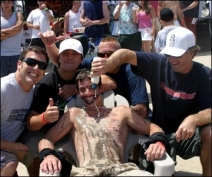 Phillip Soven is really good at riding a wakeboard. Almost too good. Oh yeah, and he’s just a punk kid, who happened to turn 16 in Reno during the Pro Tour stop. And after a month of a season where Froggy has won almost everything and not even made slight attempts of humility about it, it seemed the perfect time for a little pay back.
While Phillip watched the quarterfinals with that smirk on his face that seemed to say “they should just save me the effort and put me into the final” the other riders were plotting. Phillip caught wind of it and was soon digging around for what was going to happen to him. But no one would let him in on the secret and when he least expected, he was zip tied to a chair.
The plan was to turn him into a “human birthday card” and have everyone write birthday messages in permanent marker on his body. But of course, that turned into a beard and lots of random scribbles all over his chest and arms. And then there was bottled water and sunscreen dumped all over him and sand for good measure.
While Phillip bucked around in the chair, desperately trying to get loose, everyone sat back and watched, even his dad, who offered no help despite Phillip’s pleas. People posed for pictures with him and had a good laugh at his expense. But eventually everyone grew bored of watching him suffer and all he could do was sit down, still tethered to the chair and wait for someone to let him out.
Eventually he was cut free and before you think that perhaps this was a little harsh, maybe you should know what set this all off. Last week at Masters Phillip won. And with that prestigious honor came a ring, which Phillip proceeded to “show people” by smashing it into their foreheads. Several of his torturers still sported masters shaped scabs. And of course there’s all the trash talking and the annoying factor of him learning everyone else’s tricks, making him totally deserving.
Perhaps the stunt did throw a little salt in his game, since the second trick of his birthday pass was a dramatic crash on the fun box. But then again, he proceeded to get up and score a perfect 100 with the rest of his run. So maybe it didn’t sink in until he slept on it. In semis he had “the worst run of [his] life and still didn’t lose.” He took third in his heat, didn’t qualify, and finally gave someone else a chance to win. Congratulations Rusty.