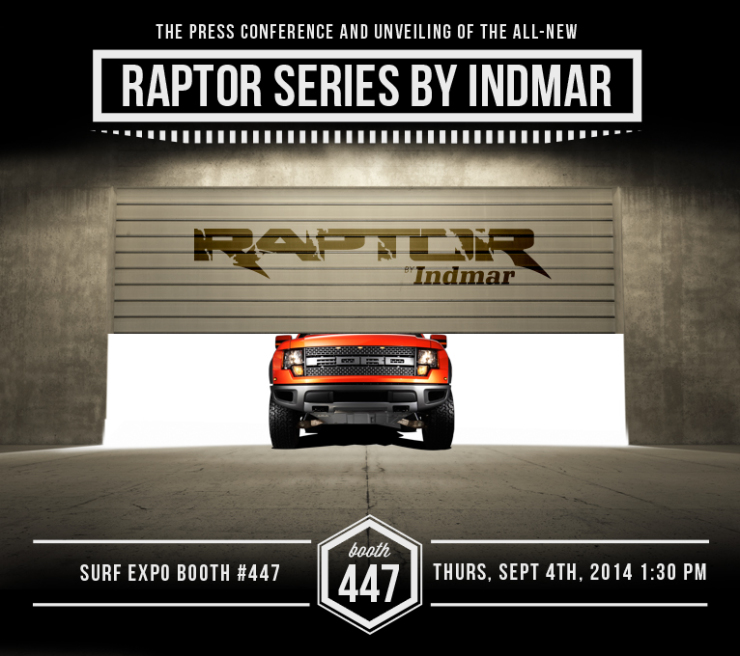 Indmar to Unveil the All-New Raptor Series at Surf Expo 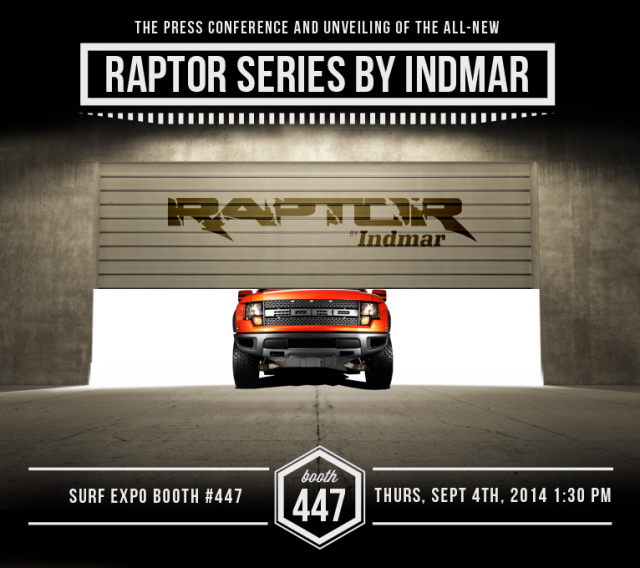  Indmar reaffirms it’s roots, as announced by Ford and Indmar at the 2013 SEMA Show, to deliver three purpose built all-new Inboard marine engines based off the Built Ford Tough® 6.2L SOHC 16-Valve V8 engine, that powers the F-150 SVT Raptor and F-Series Super Duty Trucks
 One model in the series is endowed with ROUSH Performance supercharging technology, a first for the watersports industry
 First appearance of the series purpose built specifically to tow heavy weight while taking on the most unforgiving marine conditions and brutal task of towing rugged watersports.

ORLANDO, Sept. 2, 2014 – Indmar Marine Engines will take the wraps off the all-new Raptor Series Thursday, September 4th at the largest boardsports and lifestyle tradeshow in the world, Surf Expo. The Raptor Series will make its public debut during the press conference to be held at 1:30 pm EDT. Special guests from Ford and ROUSH Performance will be in attendance for the unveiling.
Indmar’s engineering team took everything off the table and literally reinvented the inboard marine engine. Purpose building every component and feature specifically to address the evolution of today’s towboats, which have grown into larger heavier boats with increased ballast and passenger capacities and share the ultimate goal of producing bigger wakes.
More than three years in the making with over 4,500 hours of extreme lab, durability and open water testing, Indmar is pleased to deliver an inboard purpose built specifically to tow heavy weight while taking on the most unforgiving marine conditions and brutal tasks of towing rugged watersports.
The all-new Raptor series is based off a proven workhorse, the Built Ford Tough® 6.2L 16-Valve SOHC V8 engine that was designed, engineered, built and torture-tested by Ford. The same state-of-the-art engine that powers the F-150 SVT Raptor and F-Series Super Duty Trucks that boast best-in-class gas horsepower, torque and max towing ratings.
With 3 engine configurations that host more engineering innovations than you can count on your fingers, the all-new Raptor Series stands apart from the competition. From the not so standard base engine with best in class torque and horsepower to the heavy weight champ we call the ROUSHcharged Raptor 575, consumers will find each engine in the series was built on a foundation engineered to last and backed with a full 5-year Factory Warranty—Indmar’s commitment to the quality, durability and reliability of the all-new Raptor Series. For more information on the all-new Raptor series visit www.indmar.com.
###
 
About Indmar Marine Engines
Indmar is the world’s largest privately held manufacturer of gasoline powered inboard marine engines. Indmar has a pedigree going back over 40 years in the inboard marine industry and a proud tradition of pointing the way forward. Indmar was the first inboard manufacturer to deliver fuel injection, custom calibrated engines and the first to produce an inboard engine with a catalyzed exhaust; which is now the industry standard. Today, this legendary brand delivers an inimitable mix of unrivaled performance, meticulous craftsmanship and ground breaking innovations – charting a course for others to follow, yet leaving the competition behind. Indmar operates advanced manufacturing facilities in the U.S. with distributing centers in Millington, TN and Merceed,CA. For more information, please visit www.indmar.com.