Spot or Not: WOODRUFF PARK, HOTLANTA 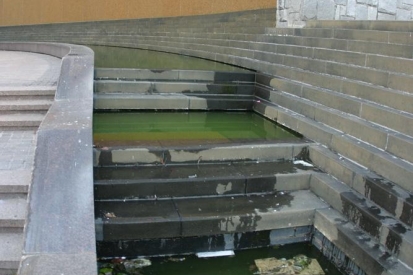 So winching in fountains is cool. We were in Georgia winching dams and we got a lead on some cool fountains in downtown Atlanta. This particular one was a three-flat, three-staircase fountain, which sits right next to cement stairs and is divided by a concrete ledge. The water isn't much more than a foot deep. The fountain is shaped like an S with the staircase right in the middle, and it’s only three feet wide or so. If you fall on your ollie you either have the cement ground to deal with or a concrete wall … your options are pretty limited. In other words it’s pretty much a death trap. If you don't land straight you’re gonna’ get your dome split open.

The downtown setting is perfect. The fountain is right in the middle of the city, and definitely not built for what we came to do. Winching here is a lot like skateboarding, actually there’s a pretty nice skate spot right across the street.

To hit the fountain, the winch has to be strapped to a light pole and you’ll only get about 10 tries so make ‘em count. But if it doesn’t work out, five minutes from Woodruff is another gap, Centennial Olympic park. Ring a bell? 1996 Olympic bombing, but now the fountain is just perfect for winching.

We only winched Woodruff once, but it was definitely an experience. After we hit the gap there were all kinds of people around watching and a few bums approached us trying to sell stolen shit. I got sprayed by some Axe Deodorant. The city culture makes urban winching that much more fun. Woodruff Fountain is a water staircase built for wakeskating. That’s all I see when I look at it.