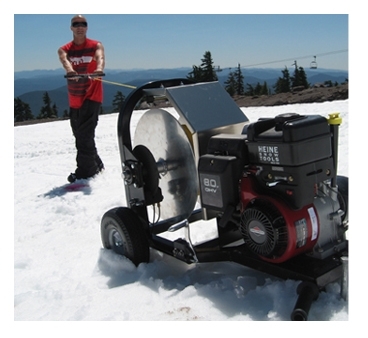 All the snowboard blogs are in a tizzy over the newest innovation for urban 'boardin — yep, you guessed it, the winch! After years of biting off skateboarding, snowboarders have finally hopped on the wakeskate train as well. It was only a matter of time really.

Heine Snow Tools has this baby on the market for $2,300 plus shipping and says it's "great for urban snowboarding. Now you can snowboard anywhere, no hill needed to get that speed for any jump or jib (such as wallrides, handrails, gap jumps,etc)." What a novel concept! They also mention it's great for wakeboarding, wakeskating and ocean surfing, cause in this economy, you gotta diversify!

Anyway, just thought it was funny. You however, should support wakeskater-built winches such as Pulldozer, Distortion and the soon-to-be released La Sewer winches.