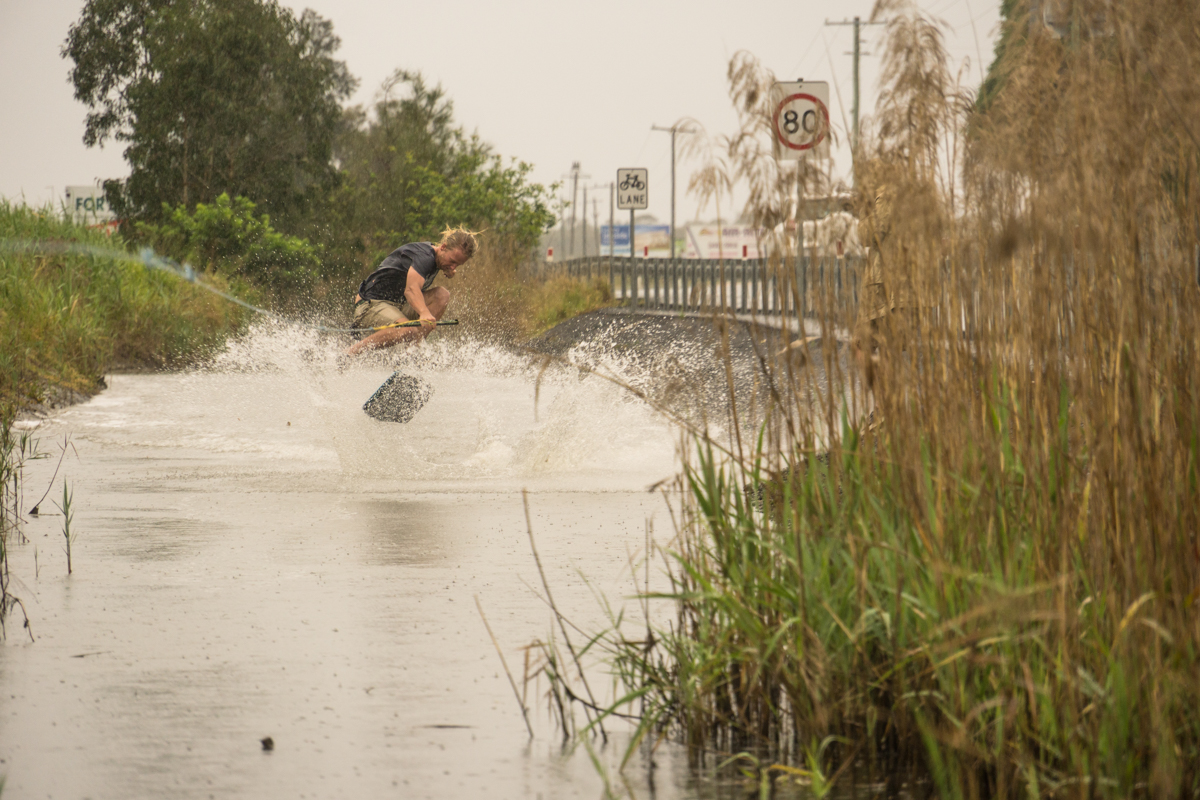 “Get outside, even if it’s raining.” Photo: Graydon

Get Out There
By: Alex Graydon

I’ll just come out and say it because we’re all thinking it: the state of wake is in a weird place right now. A bit of a funk. A couple of things going down that are pretty entertaining, but the overall stoke level seems to be on a downswing compared to a few years ago. 2012-14 seemed to have a lot of fire in some very talented bellies. Not sure if it has to do with the inevitable burnout of some of the more creative riders that always seemed to leave a fresh fragrance every time they put out a video. And I emphasize “burn out,” not be mistaken for “washed up.” The very talented remain very talented, but at some point, you just get sick of doing the same old shit and need a break. No one wants to admit it, it sounds bad for a pro wakeboarder to not really want to wakeboard right now. It’s assumed that’s all they’re meant to think about, but it isn’t healthy. Not for the body or mind. The ugly truth is that it is a taxing sport for the human body. We’ve seen too many knee surgeries, not to mention the tragic injuries to Brad and Ben. It’s not fun to think about, but it’s real, and it’s something we have to deal with as wakeboarders. But, there are a few things I’ve learned over the past few years that have helped me deal with all the bad things and try to keep a positive and fresh outlook on the sport I love and the future of it.

First off, and this is a pretty easy one, but having another hobby or hobbies to fill your time is always good. Skateboarding, photography, videography, surfing (in the ocean), snowboarding if you have access, or scootering (just kidding, don’t do that) – something else to excel in. Preferably something that can coincide with your riding and help you develop new ideas and styles to bring to the sport. We need creativity more than ever in this sport. The days of basic, generic web videos have to come to an end. I’m much happier to watch a 1-minute video of good style and bangers over a 4-minute video with 30% bangers peppered in amongst 60% of boring rail hits I’ve seen a million times. I know the math – 10% of that vid is you taking selfies or popping out of bushes or whatever the hell you kids are doing for intros. And let me be clear, it’s sick for the grommets to put these out on the reg. They need to learn how to put together a video, and you have to start somewhere. But for pros or up and comers, keep it “100” as they say, or keep it out. Some of you already know and have probably kicked yourself for it, some of you don’t know or maybe aren’t flexible enough to kick yourself. We are some un-athletic athletes; but I digress. Ride a skateboard, that’s what I’m really trying to say. Take a couple of days off from the cable park and get into some concrete. You’ll learn new things about riding a board that will translate when you strap in, and there’s a good to fair chance you’ll have some fresh ideas for things you want to do at the cable. Not to mention you’ll be more confident when trying to tackle the big plastic pipe rail after the concrete has gotten a taste of you. But don’t push mongo; you’ll get chewed into for that shit. Video games are also great side hobby if you love wasting time being a basic-ass white boy. I don’t hate them; you just learn nothing but you probably already knew that. I would hope. If you can’t do it outside, it’s probably not worth your time.

Speaking of going outside, if you’re looking for creative outlooks and trying to expand your mind then start taking more trips. I don’t mean down to Orlando, “The Mecca of Wakeboarding.” I mean get out of the country. As soon as you are old enough and/or have worked enough to pay for it with your own funds; book a flight to somewhere sick and see some other cultures and experience some new things. Take a wakeboard, a skateboard and a camera, maybe some clothes and shit too. Toothbrush for sure, bad breath is still offensive in other countries. Learning how to get around a country you’ve never been to and interacting with the indigenous is one of the best ways to expand your mind and help you grow as a person. Doing it on your own dime is even better because you have to learn to be efficient if you don’t want to get stuck overseas. You’ll find that people are pretty kind and will want to help you as much as they can, and you’ll probably make friends with some pretty cool people. Aside from getting to see and experience beautiful places of the Earth, traveling will allow you to clear your mind of all the bullshit your life is full of on a day-to-day basis, and focus on what’s truly important to you. Escape all that unnecessary noise and aggravation and just focus on the moments at hand. Often time’s you’ll find yourself in places where you have no use of a cell phone or Internet and it’s one the most peaceful and liberating experiences for your mind. Sounds silly, but it’s absolutely true.

We get stuck in ruts, as humans, it’s just a natural tendency. You fall into a routine and end up doing the same old shit week after week. It’s fine if you’re quite happy living a safe, comfy life. Go to work or school, go to the cable, do the same tricks you know, party the weekend away, repeat, repeat. That’s just a guess, but I’m probably not too far off for a lot of people. Take a few months off to do some traveling and get far away from that rut, and I can guarantee that you will come back with brand new ideas to bring to your town and your riding and you will probably be a lot more efficient with whatever you’re involved in. Again, it may sound like a load of shit to you, but you’ll never know if you don’t give it a shot. At the very least just take a little vacation overseas and ride some different parks. But also, go ride a skateboard; skateboarding’s tight.

All good runs come with the bad! Crashes from the