By billmccaffray  •  9 years ago  •  Products, Wakesurf 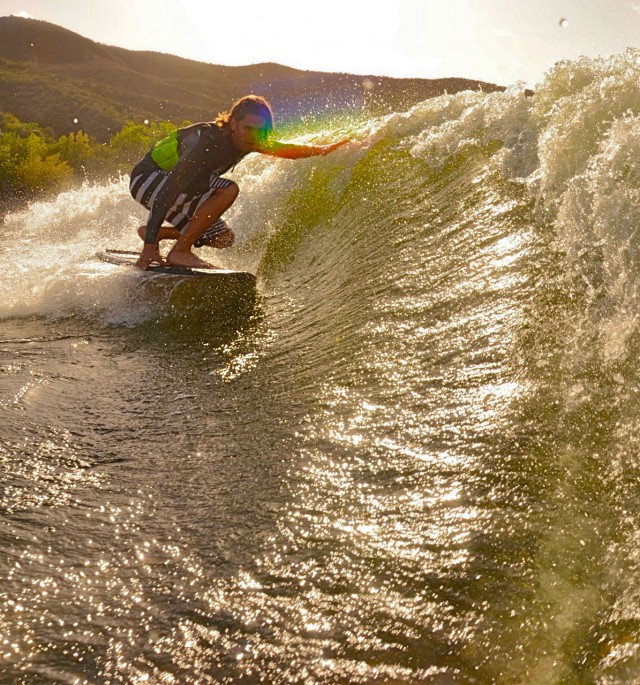 In the world of today’s wake machines, boat manufactures have gone into development overdrive in order to provide consumers the most incredible environment  for everything towed or surfed behind the boat. Almost a year ago to the day, the team at Malibu Boats was secretly working on a way to produce a surfing wave on either side of the boat without the users having to move absurd amounts of weight from one side of the boat to the other. Ultimately this mission resulted in Surf Gate, a revolutionary way to deflect water off the transom forming one amazing wave that, with a push of a button can shift to the surfer’s side of choice. The days of taking the time and energy to move weight to one side of the boat to create one perfect surfing wave were ended with the release of Malibu’s Surf Gate.

Recently Jack Springer CEO of Malibu boats and the Malibu team decided that the best way to share their new creation was to set up an interaction and participation day sharing and showcasing Malibu’s Surf Gate effectiveness. For an entire day an eclectic group of people ranging from the average enthusiast, to wake industry figure heads, to professional athletes, to surf industry illuminati schralpped the never ending wave on Southern California’s private Vail lake located near Temecula’s wine country. Imbedded into the experience for additional motivation was a Best Transfer contest with the winner taking home a cool G.

As the day progressed so did the efforts and attempts to explore the possibilities of wave to wave transfers. Not only were transfers happening regularly but the transition maneuvers were getting gnar and techy. The final round consisted of Brian Grubb, Jimmy Redmond, Johnny Stieg and Josh Sleigh. Grubby did what Brian does best and applied his wakeskate abilities only to come up a bit short. Johnny Stieg was going for broke blasting huge superman transfers but unfortunately needed a few more attempts. Jimmy Redmond really put the heat on everyone showing why he’s a founder of Liquid Force. In the end Oceanside surfer/shaper waveskate style pioneer Josh Sleigh took the honers with a massive performance. Notable awards went to Edco Marine’s Chad Borba for best slam and Liquid Force’s Tim Walters as the day’s MVP.

A big thank you to Jack Springer and the team at Malibu Boats for organizing and executing a classy interaction day centered on fun and progression.

All photos by Kevco Media