Wound to the Body 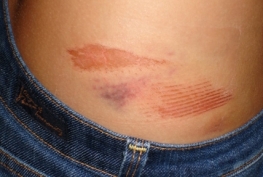 Yesterday was the day Lauren Loe ate some rail at The Projects. I don’t know if it was lunch time or snack time, but she ate the stuff out of a new rail. She took a chunk out of her left shin, scratched her right shin and sanded her hip. I’m pretty sure she was wearing a helmet, ‘cause if she wasn’t she just might have given herself a permanent lazy eye. On other bodily harm news, Theo, Chase’s new puppy, got his manhood removed the other day. The weird thing is that he asked for it. He was tired of being hyper, he just wanted to mellow out and lay around and eat dog food and human hands. So that’s all of the meatloaf news that I have. If you could send doggy treats to Theo’s dog house and Neosporin to Lauren that would be so nice of you web viewers – really, that would be the nicest thing you could do.