Who Let Risa In Here? 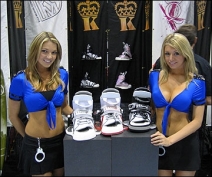 What was a sorority girl who doesn’t know the difference between Liquid Force and Hyperlite and has never done any sport involving a board in her whole life doing at Surf Expo, might you ask? Beats the hell out of me. (Actually, before I attempt to explain, I kind of need to take a second right now to congratulate myself for being able to namedrop those brands just then. I don’t mean to toot my own horn, but…beep f*ing beep).
Anyway, a few months back, I wrote a sarcastic e-mail about fashion to Alliance, mostly because I have too much time on my hands, and because I’ll do anything for a cheap laugh.  Including admit that. Much to my delight, the powers that be here at the magazine apparently got a kick out of the letter, and suddenly, there I was at Surf Expo, on a mission to “write something else funny.”
Want to hear something funny, Alliance? I don’t know anything about water sports. Not the names of any pros, brands or tricks (are they even called tricks?)…nothing. I do, however, know a humorous situation when I see one, and me surrounded by hardcore, punk-ish athletes…now that’s comedy.
So I set out with a pad and pen (and by “set out” I mean ”meekly followed Alliance’s managing editor around, smiling and nodding”) on my quest to not only understand Surf Expo, but to try to write something funny about it.
I’m assuming if you’re reading this (and I’m not sure why you are, but thank you), you are most likely familiar with the hardcore wakeboarding lifestyle. I, as I said, am not. So here’s what you all look like from the outside.
Basically, from what I could tell, Surf Expo was about schmoozing, free stuff, checking watches to see if it was alcohol time yet and, perhaps most importantly, pretending not to be hung over in order to schmooz and acquire said free stuff.
For such a sweet event, I must say that the name “Surf Expo” is really lacking in both creativity and accuracy.
If it were up to me, I would have called it “People Who Need Haircuts Expo,” “High Fivers Anonymous Expo,” or my personal favorite, “Is it too Early to Start Drinking? No? Then Where’s the Beer? Expo.”
I don’t mean any of that in any sort of insulting manner. I could not be more jealous of all of you insiders of this laid back, friendly, party-happy community.
In fact, the second coolest thing that happened to me at the Expo was seeing someone wearing the same shirt as me. The reason this was exciting is twofold.  A) Because I spent an embarrassing amount of time trying to pick an outfit that would fool people into thinking I belong here, and it appears that I succeeded in emulating the lifestyle that I envy so. And B) It was refreshing to see another female wearing a shirt, as “skimpy bikini” seemed to be the ensemble of choice for Surf Expo’s female population. (In case you’re wondering what the first coolest thing that happened to me was…I got free stuff.)
Before the “girl wearing my shirt” sighting, which eased my worries about looking like an imposter, I must admit that I was waiting in fear for someone (someone with shaggy hair and board shorts who just finished high fiving another shaggy-haired board shorts wearer) to grab me by the arm and say, “Excuse me, miss. You clearly have no business being here.”
Now, after experiencing the Expo in all its glory, I realize that nothing of the sort would have ever occurred.
First of all, should anyone here have actually called me out, they would’ve said something along the lines of, “Dude – what the f*ck?” And second of all, no one gave a shit.
Everyone here is so refreshingly happy go lucky and genuinely nice. In case you didn’t know – you are part of a kick-ass community of the most easy-going (raddest? Is that what you would say?) people on Earth.
Everyone I met, apparently several of whom were wakeboarding legends, (I of course had no idea) was quick to introduce themselves, shake my hand and of course, ask what I was doing there.
“Do you ride?”
Um, no. Not even close.
“Oh, so are you with a clothing or equipment company, then?”
Nope.
“Got it, so you’re with Alliance, right?”
Not even that, really.
“Eh, that’s cool. Want a beer?”