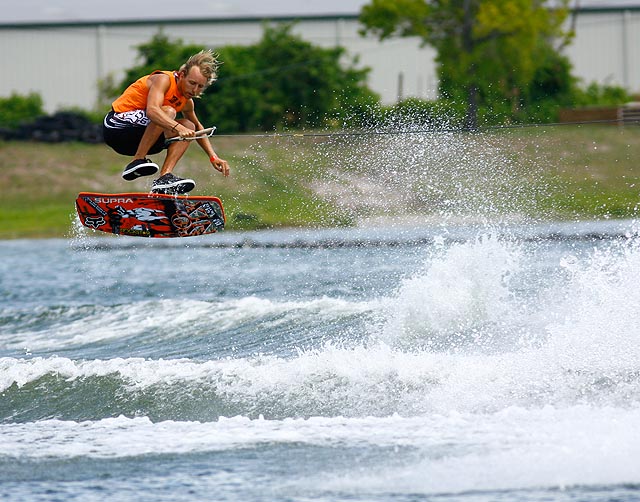 The Wake Games wrapped up at OWC in Orlando yesterday, capping off another successful kickoff weekend to the 2011 season. Lots of fans turned out to watch some of the most insane action, as well as to get a look at the new riding format for the semi-final and final rounds. The new format is a bit tougher for the riders, but definitely provides from serious drama and almost nonstop action for the fans. Rather than getting one pass and three falls per round, the semis and finals now provide the riders with two passes to throw down their best tricks. The pass with the highest score goes through. But, the rider only gets one fall. So if a rider happens to hit the wake a little bit wrong and fall on his first trick, it’s the next rider’s turn. One and done. It actually happened to Harley Clifford during his second run. Fortunately for the Aussie phenomenon, he was already in first place after his first pass. The other four finalists (Phil Soven, Rusty Malinoski, Bob Soven, and Austin Hair) couldn’t best Clifford’s score, so he held on for the victory.

Another new aspect to the Wake Games and the PWT riding format, was the double up. Rather than throwing a double up at the end of the rider’s finals pass, there was an entirely new contest for the five finalists. After the finals were done, each of the Pro Men finalists got to compete in a $1,000 cash prize double up contest. Pretty good incentive for the riders, which definitely gives the fans some exciting action. It also doesn’t put a ton of pressure on the riders to land a really hard or progressive trick off the double up in a finals run. So rather than play it safe and risk not making the podium for the finals, the riders can now charge it in hopes of stomping something insane enough to take home $1,000. Go figure, but this time around with the new format, Harley took the prize with a perfectly stomped melan heelside 900.

Congrats to all the winners, especially to Team Malinoski for posting the best score throughout the weekend and being named champs of Wake Games. Check out the video of all the action here as well! FINALS VIDEO

Harley's winning trick in the $1,000 double up contest