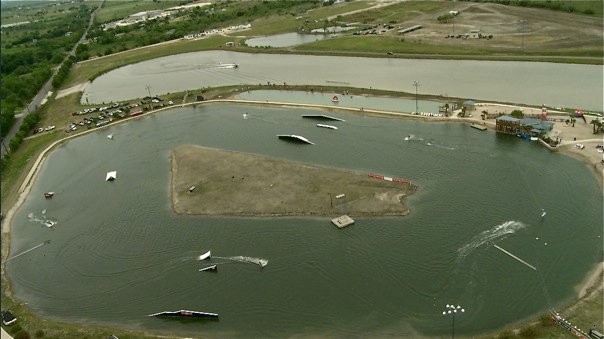 After months of planning and anticipation the 8th annual three day wake and music festival has come and gone. With so much hype preceding the event it was going to be hard to live up to expectations, but TSR nailed it by putting on the best event ever at Texas Ski Ranch. The cast of wake competitiors was better than ever before and between the Rookie Triathlon, Mickey Avalon and the Bikini Contest Saturday night there was plenty of action to entertain the estimated 10,000 people that passed through TSR this past weekend. 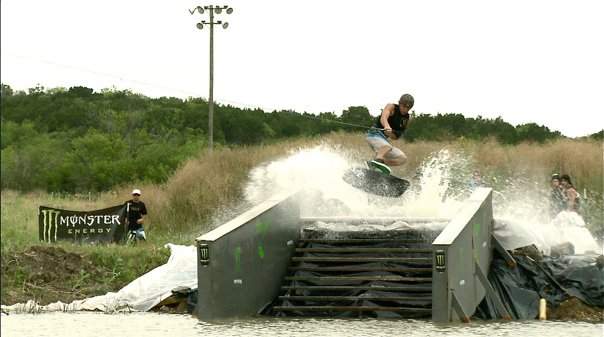 The event breakdown for the unfortunate souls that missed out began with the inaugural Obscura Championships presented by Monster. Aaron Reed and the crew had free reign with the small ponds towards the back of the property, and took full advantage of the setting building a seven stair pool gap with hubba style ledges on both sides as well two more ledges in the landing pond. The different hits gave the opportunity to judge the best line rather than just best trick. Reed was able to entice some of the largest names in the wakeskate industry including but not limited to: Nick Taylor, Danny Hampson, James Balzer, Stuart Shinn, Ben Horan, Andy Pastura, Bret Little, Reed Hansen. Even Matt Manzari who is set to be married just seven days later came out to help judge qualifying on the first day! In the end Ben Horan was crowned Champion, Reed Hansen took second with use of only one arm (seriously he hurt his shoulder and rode with his arm inside his vest) and Danny Hampson took third. The Obscura Championships brought a level of wakeskating to Cablestock that TSR had not seen since the Toe Jam three years ago.

After Friday’s Qualifying round for the winch comp finished, the wakeskaters headed to qualifying behind the MasterCraft X-Star and then to the cable for two of the most fun events of the weekend. TSR had scheduled a wakeskate launch competition and a shuvit comp for Friday night. First was the launch that was open to any and all. After narrowing it down to just four riders we strapped the shadow box to their helmets and littleraly let them fly. The finalist included Chad Sharpe (Pro Wakeboarder) Bret Little (Pro Wakeskater) Bryan Wogrin (TSR Pro Shop Mgr.) and Wes Keller (Rookie Cable Operator). They each had their own unique style but Bryan Wogrin edged out Chad Sharpe going 22.7 feet in the air, the same height as the largest ever-recorded double up by a shadow box (Rusty Malinoski). Chad Sharpe went 19.3 with his patented Flying Squirrel. This event had to be more fun for the spectators than the participants. 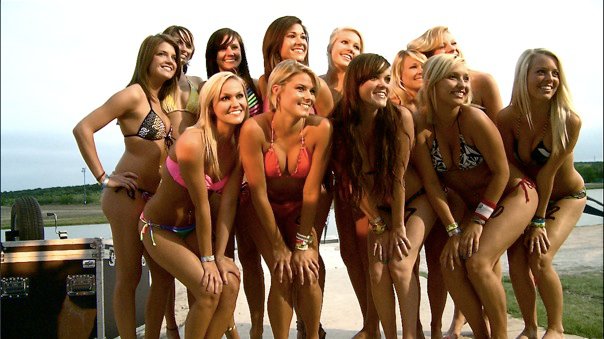 Immediately following the launch was the shuvit comp. How many wakeskate shuvits can you complete in one 60second lap at TSR. This event took a little to get it started, but Nike 6.0 rider Nick Taylor said after taking two attempts that “it was one of the most fun wakeskate events he had been to in a long time.” The format was simple: do as many shuvits as you can in one lap and you can keep trying as long as you have something left in the tank. Grant Roberts was the fourth rider off the dock and threw down a phenomenal 51 shuvs. The three previous riders had 31, 32 and 43 which at the time all seemed amazing. During Round one Nick Taylor was the second closest with 44. While no one got close a lot of riders took additional turns trying to better Grant’s 51. Andy Pastura and Nick Taylor both posted 47 on their second attempts while almost blacking out from exhaustion. Bret Little didn’t want the title to leave Texas and put out 43 with about 15% of the course left but fell. After being convinced to give it one more try Bret had 40 at the exact same spot and fell again. Both runs he was on pace but his final run ended with Bret throwing up twice from exhaustion!  This should tell you how bad the riders wanted the $10 per shuv the winner receives, but maybe more importantly the bragging rights. When everyone had nothing left Grant went on a victory lap and landed 20 shuvs before crashing at tower 1, a pace that if he could of held would have been over 60 better than a shuv a second. Congrats to Grant whose record will most likely stand for at least one year until Cablestock 2011!

The Cable competition began with the two best Cable riders in the world, Tom Fooshee and Nick Davies winning their heats along with Marc Shuster from Ski Rixen winning the third heat of the Day. Nicola Butler qualified first and continued her domination on through the finals where she took home the top spot. The Junior division was won by Texan Ryan Smith. Reed Hansen qualified first in cable wakeskate but was only able to finish fourth in the Finals after hurting his shoulder and again riding with only one arm. The podium was filled by Josh Zentmeyer (3rd), Bret Little (2nd) and Andy Pastura taking home the 2010 title. While the much-anticipated Mens Wakeboard final expected Nick and Tom to dual it out, Nick sustained an injury on his opening lap that would prevent him from riding the rest of the day. We all wish Nick a speedy recovery and hope to see him at full strength at TSR for the first stop of the WWA World Series in less than a month. Tom Fooshee continued his dominance with a seemingly effortless win throwing down a Pete 5, HS BS 7, off the kickers, killing the rails with gap bS 450’s and air tricks that included Smobe 5’s and Crow Mobe 5’s. The real kicker was for his wildcard where Tom stuck a switch toe side 1080, his fourth in a row! Marc Shuster took second with a inside slim and a whirley 5 among a few other hammers. Josh Rice, Cody Johnson and Sam Scoggins round out the top five while Nick Davies finished sixth despite the injury. 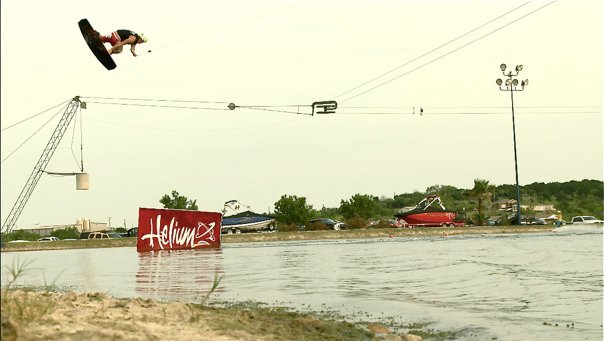 The MasterCraft boat competition was the most difficult to judge all weekend long. The riding was unbelievable with so many great riders making it out to TSR for this years event. Tom Fooshee continued his Texas dominance by beating out Sam Carne and Chad Sharpe who also found their way to the podium. Stu Shin showed which discipline he excelled in by winning the Boat competition in wakeskate. Nicola Butler swept the cable and boat comps becoming only the second woman to do so. (Heather Johnson 2007)

The Liquid Force structure only comp saw Tom Fooshee dominate again. With Nick Davies forced to watch because of an injury, Tom was able to place first in all three areas earning a perfect 100. Cody Johnson was second and Gabe Lucas took third. The real surprise was rookie Sam Scoggins who qualified for the finals in both cable events and was able to take fourth in the structure only. Look for more out of Sam in future events at TSR.

Saturday also had all kinds of activities that were not part of the competitions. Cody Johnson adapted a c-rail from the skate park so it could attach to the front of our tractor to be used as part of the Rixen Little Bro two-tower demonstration. LF riders Cody Johnson, Kevin Henshaw and Tom Fooshee showed off for a while before we filled the lake with tubes and inflatables by Liquid Force for everyone’s enjoyment. This was the perfect way to watch competitions on either side, as the Little Bro lake is sandwiched in between the boat and cable lakes. The bikini Contest kicked off Saturday night’s festivities, followed by Mickey Avalon. A show that I recommend everyone sees at least once in his or her lifetime. With spectators well over 1000, the college-aged crowd was able to see a great show in even a greater setting! Tom Fooshee continued to show why he is widely considered to be the best overall wakeboarder in the world winning three different wake events for the second year in a row. This year he was able to add the Texas Hold’em championship, which will probably secure his place as the only athlete to ever win four events at one Cablestock. 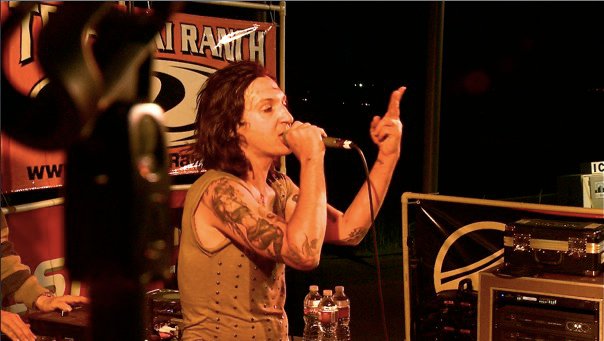 Rukus skateshop gathered the regions best skaters for the 2010 Skateboard Contest held on the Nike 6.0 mini ramp. Local rippers Raney Beres and Edward Sanchez tied for the win and James Fitzgerald finished third.  Raney has been winning contests at TSR since he was 8 years old and continued to dominate this weekend.

James Clevland won the Rookie Triathlon with a time of 44 min & 10 seconds, while Andrea Fisher was the first female finisher with a time of 49 min & 13 seconds. Both athletes are ironically from Austin, TX and were able to beat the international field of athletes. The course utilized the cable lake for the 300-meter swim, 11.1-mile bike and 2-mile run. The field was made up of nearly 1000 competitors that filled the property Sunday morning starting at 5am.

I feel like I have only scratched the surface on the event, look for multiple films to be produced by Norbifilms.com capturing more of the event. If you have read this far you must be pretty sad you missed it, all I can say is mark your calendars for next year! TSR would like to thank MasterCraft, Liquid Force, Nike 6.0, Burger King, Monster, Cablewakeboard.com, Norbi Films, Rukus, Obscura, 101x, Study Breaks, Swami Studios, Alliance, WakeWorld.com & Wakeboarder.com.