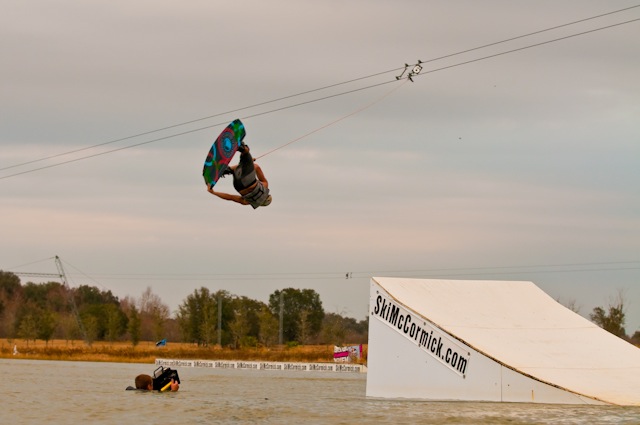 All photos by EJ Peterson

Tom Fooshee took a little winter vacation trip to Florida this past week because, despite the overall miserable weather of late, it’s better than what they’ve had in Texas. Since Tom is most at home at TSR, an obvious stop on his FL tour was McCormick’s cable park in Tampa. Let’s just say, Tom and cable parks go together like peanut butter and jelly. I can’t even comprehend most of the tricks he does, but they look extremely sick, and even fun for a mere mortal such as myself, when he does them.

The left-foot cable at Mccormick’s Cable Park is a little different then most cable parks, but it didn’t take Tom long to adjust. The calm, tranquil waters of McCormick’s were are still a little chilly after Florida’s abnormal winter, but a little warm up and the magic started. Tom looked like the Energizer Bunny bouncing around hitting everything possible, leaving no flat water to waste. He was also on hand to make sure the Liquid Force Demo went smoothly, putting boards together for riders and giving them in-depth analyst of each one. Tom is a great guy and a great rider, and it was a pleasure to watch him shred Tampa’s cable.