Think You Got Knee Problems? 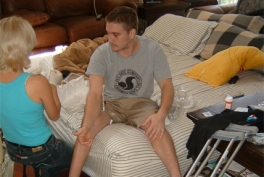 Parks Bonifay had a bitch of a late winter and early spring. He underwent arthroscopic surgery in mid-January to clean out some cartilage in his right knee, but it then got infected a week later. In all, Bonifay had to undergo four additional surgeries to fix the problem, and spend a month laid up in his living room watching TV and taking I.V. antibiotics. It’s a weird story, check it out:

A: What exactly happened to your knee?
PB: First off, I tore my meniscus and some cartilage, and that was before the Orlando Pro Tour stop of last year. But it felt good enough to ride on all year. So I rode all season and my bones were rubbing together all year long, it’s called a bone contusion. So I knew I was going to have surgery all through last year and when I did they cleaned up all that stuff and smoothed my bones out because they were all chopped up. It was fine, four or five days after, I had full range and was walking fine, so I went to the Utah Boat Show and that morning I woke up and it was swollen and sore. And a couple days after being at the boat show I couldn’t even put weight on it anymore. What happened was one of my stitches popped out and the doctor told me to get in because it might have gotten infected. So they admitted me into the hospital the next day for five or six days and they were treating me with antibiotics and doing all these cultures to see how bad it was.

A: How did you get the infection inside?
PB: Because that stitch popped out something went in there. My cut healed fine but deep in my knee something happened. So I was in the hospital for five or six days and then I went home, but two days later I was back because I was in so much pain. So then they told me they were going to do this series of flushes and in six days I had four more surgeries where they would go in through the same hole and run all this fluid in there and flush all the bad stuff out. I saw the bags of fluid that they would use and they were like two gallons each. So now I’ve been like this for a couple of weeks.

A: But you’re doing therapy already?
PB: Yeah, I guess when your knee gets infected all the tissue tightens up and you can’t straighten it at all. So I’m doing therapy now where they just crunch through it. It is just torture going to therapy, it hurts so bad, but that’s the only way you’re going to get better and walk again.

A: So what’s the deal with wakeboarding?
PB: Internally my knee is fine, so once I get my range back and that tissue loosens up. I need to put a little meat on my leg. I went into surgery at about 184 and I just weighed myself the other day at 167. I should be wakeboarding in about two months. I might miss my double up contest, and I’m going to do just some of the big Tour stops, not every single little one. It’s been hell, for sure, it’s so depressing sitting in the hospital and just sitting here not being able to do anything. It sucks not being able to wakeboard but I mean not even being able to go for a walk? To go outside and do anything or see the sun for a month? It sucks. But now I can get around on some crutches and reel in some bass.