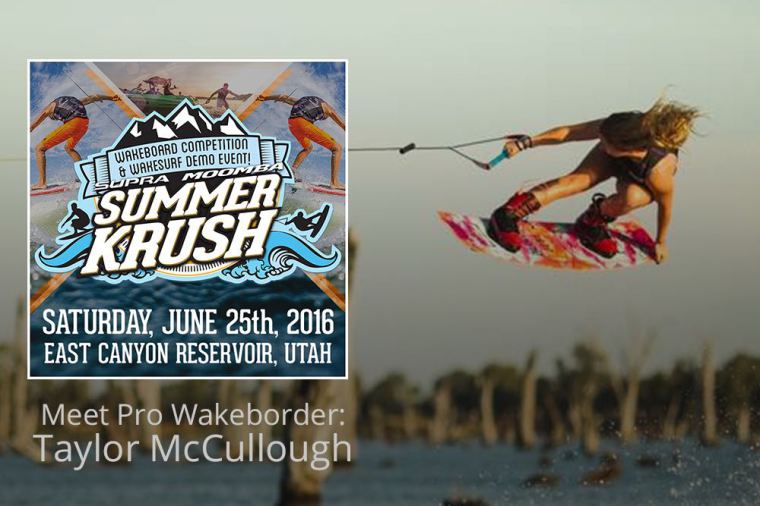 Salt Lake City, Utah- June 14, 2016 – With some serious competitors registered for the invitational Wakeboard Competition and seats moving fast for the Wake surf demo opportunity to ride behind the best wakesurf boats and boards on the market, this day will be packed full of action and activities on the beach and in the water!

When the organizers were asked by Utah DNR officials to bring this event to life during boat show season this past winter, Marine Products immediately stepped up as title sponsor and exclusive tow boats for the event with their Supra and Moomba lines. The all-day event will feature Wakeboard competitors from intermediate, advanced, open women and outlaw divisions culminating in cash podiums for the best of the best in each. Contest organizer and presenter James Kleinshnitz of wakeutah.com stated, “We wanted to bring a contest online to start the season that would push intermediate to regional pro riders to up their riding early so that they can compete at their highest abilities all season and inspire younger riders to advance as we have no beginner or youth divisions on this particular event making it aspirational to get an invitation in years to come and be riding at a certain level. We expect to see some early season “A game” riding at this inaugural.”

The Wake Surf Demo is all day and features the entire pro shop board offerings of Marine Products including Liquid Force, Ronix, CWB, O’Brien, Wakewood and more with their top of the line Supra and Moomba tow boats exclusively pulling this event. Sample all the boards and get set behind each boats unique surf wake! All going down in an exclusive “no wake zone” where only participating boats can operate. “This is a fantastic opportunity for the active enthusiast looking for their next boat or board to get a session behind these elite tow boats and try several boards. Our motivation in growing these events is building the family culture and community around it in the region.” Said Paul Avner, event organizer and principal partner at ClubRecUtah.com. Additionally, Supra Boats and SheShreds.co pro team athlete, wakeboarder Taylor McCullough will be on hand to sign autographs and will throw down a demo run to entertain before the podiums are announced. Taylor is currently ranked 4th in the World coming off a 3rd place podium at the Nautique European Open in Portugal.

Along with the core presenting sponsors AD Triple S Motorsports is onboard this year providing demos and rides around the event on their Rzr’s, demoing Sea-doos and other offerings. Maverik has also partnered in this year providing marketing support and a perfect fit as “adventures first stop”. Jones Shirts and Signs are providing unique trophies and official event apparel. Media partners this year including Standard Examiner and Alliance Wakeboard Magazine helping get the word out to wake sports enthusiasts and the general public alike.

Tony Duffy, Principal at All-Actionsports.com and completing the event organizer group had this to say. “We are stoked to be adding events to the portfolio this year and building community around these sports and lifestyles.” Rounding out this year’s sponsors and vendors are of course the Utah DNR, supporting the event annually along with Flowrider, UT, Koastline Katapult, Mountainside Wake School, Epic Wake Sports and Utah Wake Addicts: enthusiast’s outlets, SheShreds.co: purveyors of inspiration and supplies for female action sports athletes, DiodeOptics.com: affordable, fashionable eyewear, Ogden Blue: digital and offset press.

Expect a full day of music, food, fun, raffles, blob rides courtesy of Koastline Katapult, board sport trainers with Flowrider Utah and lots of other beach action to make a day of it on top of the wakesurf demo and fierce wakeboard competition. For more info and to register to participate in the wakeboard competition or wakesurf demo go to www.wakeutah.com or just come on out and watch all the action.

About The Organizers and their Wake Event Series
ClubRecUtah.com, All-Actionsports.com and WakeUtah.com act as a consortium to curate and produce wake sports events in the Mountain West Region. In its 7th Year, The Wake Up Weekend event has taken on a festival feel with competitors, audience, supporting brands and vendors coming from throughout the Mountain West region to take part in the fantastic action/adventure sports energy and family friendly vibe at this amazing spectator friendly location. July 29-30, Middle Inlet, Pineview Reservoir, UT. As one of only 22 global stops, The World Series of Wakesurfing makes a stop at Pineview Reservoir as the Rocky Mountain Wakesurf Open August 12-14. With influence stretching from Montana and Idaho to Nor Cal, Nevada, Arizona, Utah and beyond our signature events see attendance of 3k plus each year and growing. It is quite a spectacle to see the shoreline solid with spectators and a hundred plus boats in the tie off along the competition tow line. The goal is to build community with family friendly activations that grow these sports we love and impact commerce. 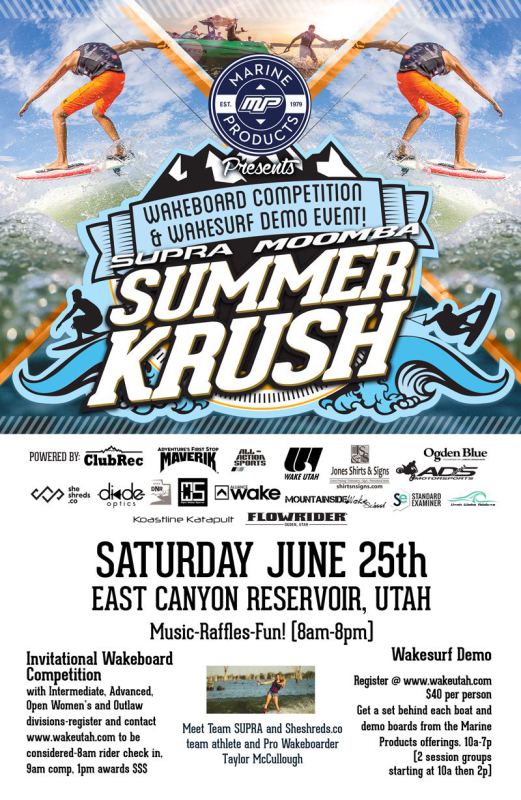