Rider of the Year: Ben Greenwood 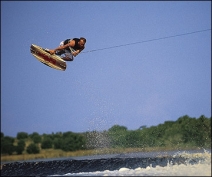 The first time I met Ben Greenwood was in downtown Orlando and Aaron Reed told me to check him out and to give him a web interview or something. I believe I said, “hell yeah.” So I went up to Ben to see when a good time would be to do an interview and he replied, “Don’t do this ‘cause Aaron asked you.” He didn’t say it like a jerk. I replied back with, “I don’t know anything about wakeboarders, so if Aaron is saying you’re good then I want to help you out.” Well, we carried on with our conversation and then the next week I watched Relentless and his part ripped. I think shortly after that Tony did an interview with Ben. Well, now here we are and Ben is our Rider of the Year. Congratulations to Ben for an outstanding year and for being a great dude. Pages 72 – 80 of the Dec/Jan 2006.1 issue.