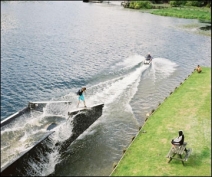 For a few days at the end of March, the almost painfully scenic Orakei Korako riverfront was commandeered by a group of professional wakeskaters in order to provide a picturesque backdrop for Red Bull’s Step Up project. Conceived by Red Bull New Zealand’s athlete and event manager Ivan Mennim, Step Up involved creating a customised rig of banks and hubba ledges, setting it up in the Hidden Valley’s thermally charged river, getting some A-list talent in to work it, and documenting the entire process. Thomas Horrell, Aaron Reed, Scott Byerly and Brian Grubb were flown in from Florida to ride alongside kiwi local Justin Sweeney, and the gang came through with plenty of big tricks over the four days. Step Up’s rig consisted of a 40-foot long box six feet above the water, with a mellow on-ramp, a bank/wallride down one side and a couple of hubbas off the end. Although a frustrating drop in the river’s water level prevented the on-ramp from being fully utilized, the boys were more than capable of starting from the trough and hitting the hubbas despite the quick set-up time and shallow landing. Alliance will be featuring a full story on the event in an upcoming issue, and look for video of the event to be up on the site soon.