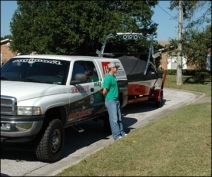 Matt “Mistakes” Staker woke Josh McWilliams up and tried to get him to drive to Cobe Mikacich’s house to do some interviews for Pull. This is how I woke up today, hearing Matt bugging Josh. I decided to go with them to do some talking because I was bored and I didn’t want to wait six hours for Chase to wake up. We pulled into Cobe’s neighborhood and man I had no idea that Cobe’s truck was that cocky – it had all of these web addresses and sponsor names on there – it looked great. I walked through his garage and saw a weight bench in the second stall – which obviously told me that Cobe is a well tuned machine. I finally made it into the house and Cobe is in the kitchen drinking an eggnog drink with whipped cream on top. He offers one up and I have to ask if it’s good. He replies, “It’s great.” I compliment him on how cocky his truck is – “It’s very cocky,” I say. Matt comes out of the room and asks us to keep it down, because he’s interviewing Sean O’Brien. Anyways, back to the truck. Cobe gets his laptop out and fires it up so he can show me pictures of a new truck he wants to get. We start talking about dial up vs. wireless internet. He has a theory that wireless destroys your computer, ‘cause when you go back to dial up it really makes your computer perform worse. Once your computer has tasted the great life, why would want to be a part of the normal life? That’s what I think. Okay, these pictures of this truck are absolutely insane – it’s a Ford truck, remember the F-150? That’s WAS a pretty big truck, but now there’s an F-650 and this thing is mammoth. It can tow like 40,000 lbs. or something maddening. Cobe and I end our conversation because we have to get Matt to the airport, but hopefully next time I see the Mikker he’s cruising in that beast. Happy holidays.