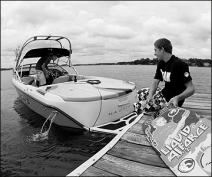 I spent an afternoon with Philip Basino and George Daniels the other day on their home lake in Orlando. In case you’ve been living under a rock the past couple years, these two kids are professional wakeskaters. They are good and they enjoy to wakeskate. Or maybe they enjoy to wakeskate because they are so good.
“Philip” and “George” aren’t the most common names in the world these days. There seems to be a lot more “Kyle’s” and “Reed’s” and things like that. Phillip and George are kind of 50s names. I’m just telling you a little about them. Also, they are both murderers because they both killed it the other day. Sorry, that was lame, but it’s the truth.
I really don’t know why I’m writing this.
Just last month Philip won the wakeskate division of Nationals, and guess who took second? Um, George. What blew my mind the other day, though, was their consistency. They only rode for about 15 minutes each, but they got going right off the bat. No warm ups, not too many crashes, just shredding. Philip was doing backside big spins one after another for an upcoming Come Correct in the magazine. Apparently he just learned switch big spins, too.
After Philip finished his set, George went downtown. Wake-to-wake grabbed 3’s, toeside indy shuv to rewind and a frontside flip. Other than being extremely talented on a wakeskate, though, both Philip and George are laid-back guys who are fun to hang out with. So if this article has made you want to hang with them I guess you could call information in Orlando and ask for George Daniels and Phillip Basino. They don’t live together though.