Matters: Air It Out 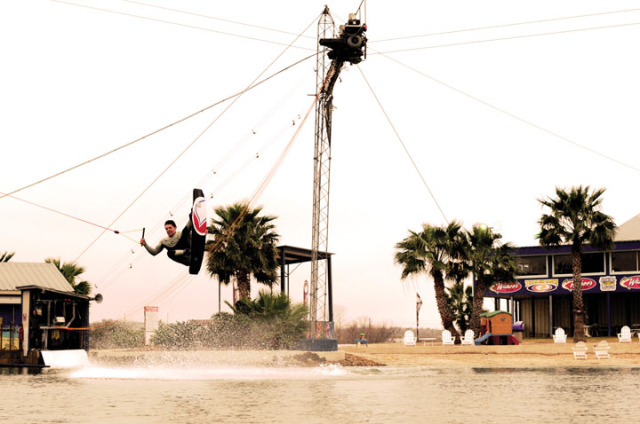 The King keeping hold of his crown

Bell bottoms, cigarettes rolled up in a shirt sleeve, discos, afros, Chia Pets, JNCOs, rap murders, mood rings, Crocs, virtual pets, myspace.com, etc, etc, etc. I’m talking about fads. Some are awesome while others should have been dismissed as a terrible idea the day they were created. We have gone through many fads within wakeboarding, but I would like to discuss one that is occurring right now at cable parks around the globe. Call them what you want; air tricks, flats tricks, slingshots, corner tricks, getting stretched out… we know all about them at the park and have probably done at least one, whether it be out of humor or out of progression. Here’s the problem, they have the potential to become another really bad fad in the history of wakeboarding and we need to do something about it.

I spent many years operating the cable at Texas Ski Ranch watching the sport grow right in front of me. I took my first liking to cable because of the endless rail hits possible at a park, only to quickly realize that kickers were the closest thing to a wake. At that time (2003-2004), there were no “obstacles/features only” contests, there were just cable (kickers, rails and flats tricks) contests. Being a competitive guy and because I liked riding the park so much, I figured I should try some contests. Consequently that meant I had to make use of those empty stretches between two towers that had no features and learn flats tricks. Ten years later I am still a fan of these moves, but only certain ones.

When I first started really getting into the cable scene it was a time full of nuclear grabs, double S-bends to blind, and spinning on rails at the park. Fast forward to present day and to many “non air trickers” much of the air/flats tricks world seems outdated. I cannot help but agree with them. I believe this is a large reason why guys who ride nothing but park, and focus on flats tricks do not get as much respect as boat riders.

I have personally learned, survived, participated in and eventually dropped many of the bad trends within riding cable, but as they say the first step toward finding a cure is admitting there is a problem. When I first started riding cable, flats tricks were only about one thing: doing as many S-bends as you can between takeoff and landing. That would include the double S-bend, the double S-bend to blind, and the ultra rare, triple S-bend. I’d say this fad has just about been laid to rest, but not completely. Following that trend was the “grab every flats trick you can nuclear” movement. This occurred throughout the late 2000’s, and is still happening in certain places today. Again, I was guilty of this, but did not get stuck to it for very long. I believe that most riders are now realizing it is indeed outdated and that the nuke is out of the grab zone. Currently, we are on this fad of “how many spins we can add to our raley moves.”

Thankfully we have all realized that to spin as many s-bends as we can is just dangling and does not look good, even with a very very quick grab that your 12 frames-per-second SLR cannot even pick up. The nuclear grab also does not look great. More like a pretzel maneuver than anything else. It had a short trendy period of life behind the boat, but I’m not sure why it is still seen regularly at the cable. I’d like to quote one of my favorite riders of all time, Ben Greenwood on this one. “I left my crossed up grabs in the early 2000’s along with my Palm Pilot.” ‘

From 2009-2012, one trick that was way too common off the flats was the raley (aka the superman) 540. Now we are seeing how many spins we can add to our raley. Really? Why would you ever do that? Don’t get me wrong here, that is an incredibly hard trick to do and takes a lot of talent to perform. But does that mean a couple of years from now we are going to see a superman 1080? When was the last time a superman was the thing to do in a professional boat event? 1998? Why then, would we do them in a video or a contest at the cable? Please guys, I beg you, stop with the superman tricks.

I gave up on the superman tricks about four years ago to push for air tricks at the cable that I thought would help progress the sport, rather than add to the growth of an unsightly fad. A few of the young bucks in the scene seem to be pushing even further than me. One is the one and only Prince Daniel Grant. He knows what’s up and it makes me happy that someone that does flats tricks will take it in the right direction by staying away from the superman. Another person that is pushing flats tricks in the right direction is Steffen Vollert. Have you ever seen him do his half-loads? They are insane! He goes huge off the water, not breaking axis and grabs his board as long as anyone does wake-to-wake.

As of 2012, flats tricks riders are starting to realize the value of grabbing their board. It looks more controlled and it’s harder, thereby showing more difficulty and talent when done properly. I’m stoked now that this is starting to catch on, it just took a long time. The great thing about cable riding is that there is much more to it than the super spinny S-bend and raley maneuvers. There are front flip and roll variations, half loads with so many different legit grabs and much more, just like you would do behind the boat. That’s the direction I believe we need to expand on in the cable realm of wakeboarding.

All of this is only directed towards the people at the top of the game, not people getting started, not riders really getting into park riding, up and comers or any kind of amateurs. I’m talking to the best of the best trying to represent the sport in photos, videos, and contests because you are the ones creating stereotypes and pushing our sport in a specific direction; good or bad. We shouldn’t take ten years to do things the right way and represent this section of our sport appropriately. Let’s do it right from here on so that we can get the respect we all deserve.