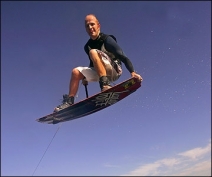 The first time I ever did a photo shoot with Aaron Aubrey, my perception of what wakeboarding was and what it could become changed. We were on Lake Shasta with a handful of other Nor-Cal riders and Aaron was the last guy to ride. I’d never heard of Aaron before, so I had no idea what to expect. Nor-Cal brand rep Tim Parsons told me Aaron was going to blow my mind, but I was a bit skeptical upon seeing Aaron’s slender build and unassuming personality. Things started to change when he threw his rope out into the water. It was long. Longer than I’d ever seen anybody ride at that time – we had to take a few lengths off one of the other riders’ rope and add it to my tube line. When we took off, Aaron casually waited for the boat to get on plane and held his thumb up, and kept holding it up until it felt like we were going incredibly fast. Then he cut out. I had to crane my neck to keep him in the camera viewfinder. He hauled ass back into the wake and did the biggest mute half-cab I’d ever seen. The picture of it is non-existent – it’s just a shot of the sky. He was going so fast and so big I wasn’t prepared for it and couldn’t keep up. But I remember saying “holy shit” out loud to myself….

Check out the new issue of Alliance to read the rest and hear what Aaron Aubrey has to say about everything from wrapped spins to water polo.