Graeme has been residing in Austin, TX, close to fellow Hyperlite team rider, JB O’Neill and the two of them hatched this idea to just load up the Prius and drive to every park they could. Luckily for the two of them, master drone pilot and content creator Dave Averillo, or Dave AV, was stuck in Orlando with nothing to do. They found him a $23 airfare so they could all meet at The Levee Wake Park outside Dallas where they’d spend a couple weeks filming as Graeme was finally able to jump back on his board.

From there the crew moved from wake park to wake park, winching along the way and capturing everything they could for Graeme’s LandLOCKED edit. This edit is a continuation of where Graeme left off after INSIGHT, full of hammers, first-evers and gnarly stunts. 2020 was an unexpected season for us all, but according to Graeme, maybe being landlocked isn’t that bad and maybe it was just what he needed so he could focus on his wakeboarding while visiting 13 parks throughout the US.

“The past 365 days have been quite a whirlwind with both highs and lows, and I couldn’t be more thankful for the countless people that helped make this video happen. Couldn’t have done it without y’all. 2021 here we come!” –Graeme Burress “And get the new Hyperlite Blacklist, HA”
END_OF_DOCUMENT_TOKEN_TO_BE_REPLACED 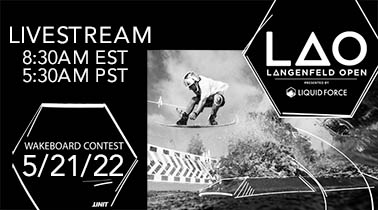