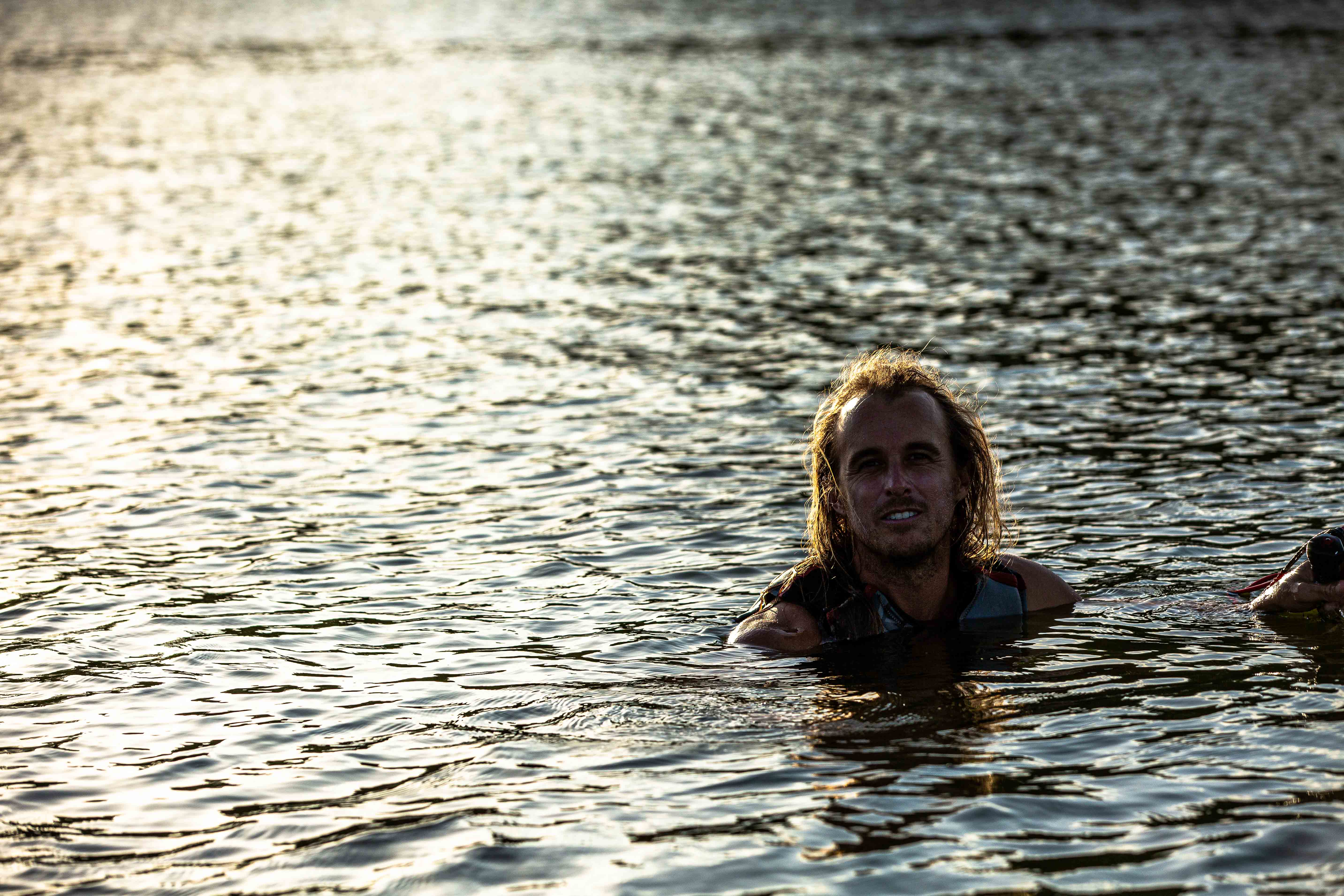 Orlando may be home to more lakes than anybody can count but, in the world of wakeboarding, there are a few that really stand out: Holden, Jessamine, Minnehaha, Hiawassee, Conway – places you have seen countless times in magazines and videos, usually without knowing. Spots that have seen their fair share of wake history, and played home to countless pro riders over the years. But the one that sticks out the most is Clear Lake. Located in the “not-so-nice” part of Orlando, Clear Lake, or “The Hood” as it’s been dubbed, has been a haven for two or three generations of riders because of its affordable waterfront real estate and progressive vibe. If you are out on Clear Lake, you’d better be ready to throw down. It’s been home to riders like Thomas Horell, Daniel Watkins, Erik Ruck, Jimmy Lariche, Adam Errington, Shane Bonifay, Chris O’Shea, Brian Reeder, Marc Rossiter … the list goes on and on. More insane tricks have been landed on Clear Lake than arguable any other in the world. And there was also the infamous “Clear Lake Rail Park”, a source of fresh content about as far back as I can remember. Someone needs to revive that spot! Jeff Langley has set up shop on Clear for years now and couldn’t imagine hanging his hat anywhere else.

What makes this place so special you may ask? What I can tell you is that the community on Clear Lake is like no other. Parties, neighborhood hangouts, the crews on Clear Lake are always getting into something. So what’s life truly like there? We sat down with Jeff Langley and his roommate Lewy Watt to see what’s up. Langley, being the true wake veteran that he is, is all about having the young guns come through his place to ride and progress. Not to mention, to light a fire under his own ass. We all need a little motivation, right? Well, the groms definitely help out with that. So settle in and take a good look into life at Langley’s! 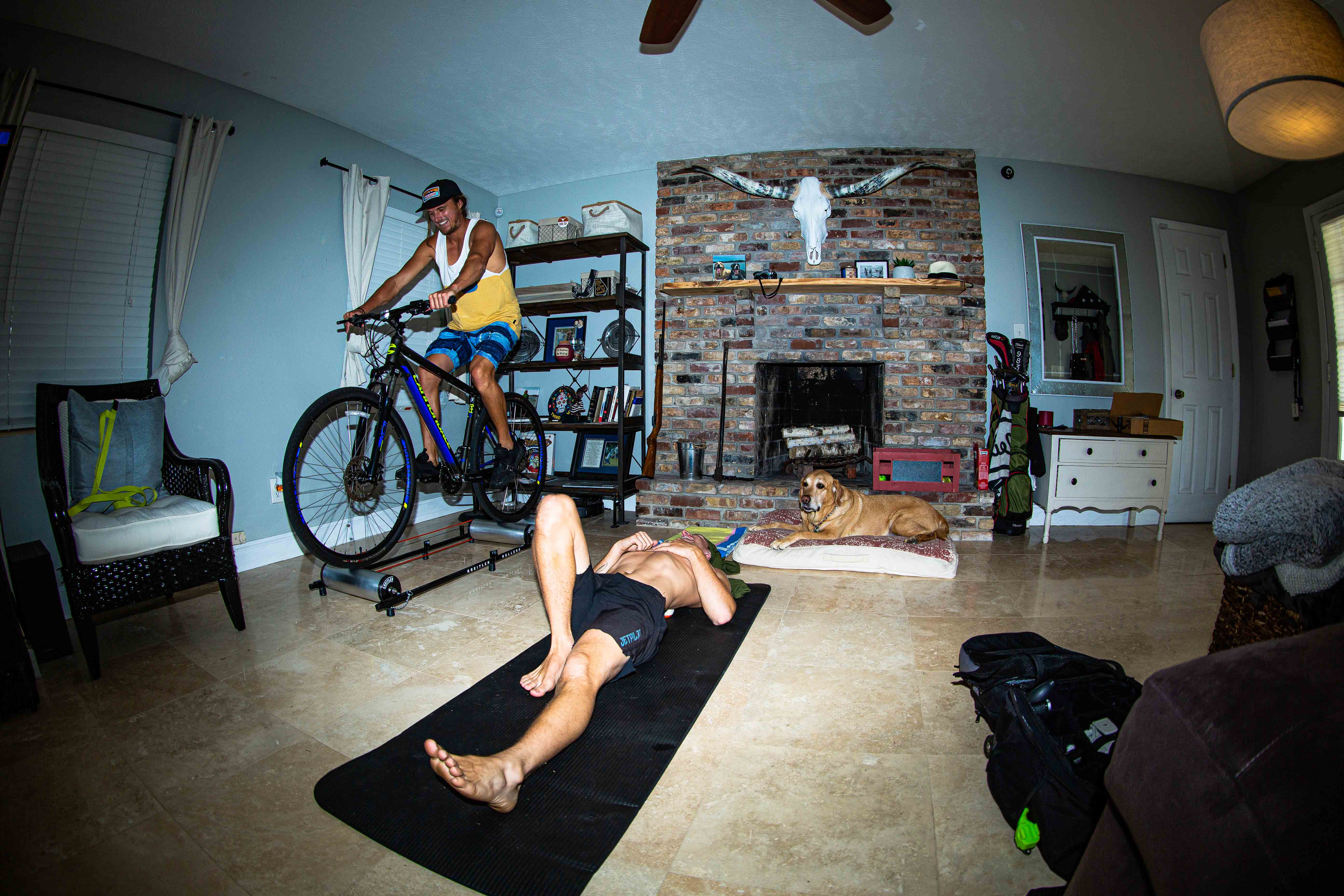 Alliance: Dudes! How’s it going? You guys have been on the road together quite a bit with Malibu over the past year, so what’s the story on how you guys became roommates?

Jeff: I think I first met Lewy and we really started hanging out after the Malibu shoot last year.

Lewy: Yeah, could have been at a contest or something but that sounds about right.

A: When did you hit him up to live here, Lewy?

L: After we hung out a bit and traveled together some, I started thinking about where I could move to in Orlando and just thought “Well, Langley’s a bit of a legend so why not try him?” *laughs* and here we are. Love Pop’s spot!

A: How long have you been living here Jeff? When did you move in Lewy?

J: Man, I moved onto Clear about 12 years ago. Clear Lake is obviously near and dear to me. Not this house, but I lived at Shane’s for a couple years then went to Jimmy’s for like seven or eight years and then ended up buying this place about three years ago.

L: Uuuuuuuuh, May this year? Yeah yeah, May.

A: With the title of this article, “Pop’s Place”, I’m sure everyone is curious about how the nickname “Pop” came about. Care to explain?

L: Well, anyone that’s hung out with Langley a bunch knows that he calls himself “Daddy” a lot *laughs*. But what I’ve noticed since I’ve moved in is that he’s always hobbling around the house like an old person so I just started calling him “Pop” or “Poppy” or “Grandpa”.

A: How do you feel about that, Jeff?

J: Ha, I call myself “Daddy” because at the Malibu shoots, I’ve gotten used to being the “team dad”, you know? The guy who’s waking up these kids in the morning to ride and other fatherly duties like that.

A: So do you like being called “Pop” or does it bug you?

J: Nah, it’s fine. It’s like the same as “Dad” so I don’t really care. I’m nearly double the ages of all the riders that are coming over here so it fits and I own it.

A: What’s a typical day like over here at “Pop’s Place”?

J: Lately, there’s been a lot of riding and shooting which has been rad. But all the camera guys have been bringing their dogs over so there’s more sh*t in the yard to pick up than usual …*laughs*. But I make Lewy pick it up so it’s all good! But for real, we usually ride a couple times a day when we’re in town and we’ve always got guys like Massi, Gunner, and Luca coming over for a rip so we stay pretty active.

A: Are they hitting you up to come ride?

J: Oh yeah, all the time *laughs*. But it really depends on the wind. I’ll check it out and we’ll see what lake would have the best line and go from there. It’s usually Clear though, because this lake is the sh*t.

*Bob says some things that we can’t print…*

A: Alright, now we’ve got Bob and Sam here. Sam is Jeff’s brother for everyone who doesn’t know. When did you move in here Sam? When Jeff bought the house?

Sam: Actually, no. I used to live over at Adam Errington’s before moving in over here. So we were neighbors with Jeff, living at Jimmy’s at the time.

J: Oh, those were some good times. I actually just remembered something. Before I moved into Shane’s, I was living at Adam’s house before he owned it. Daniel Watkins actually owned it at the time and when I moved out to Jimmy’s, Bob and Sam moved in there I think. That house has definitely seen a lot of riders.

A: Clear Lake has been a popular spot for riders throughout the years with plenty of pros setting up shop on its shores in the past and even still today. Riders like Erik Ruck, Chad Sharpe, Meagan Ethell, Tony Carroll, Shane Bonifay, and more call it home. What is it about this lake that makes it so special?

J: Honestly? It’s cheap as sh*t *laughs*. You really can’t beat the prices. It’s right in the middle of the ghetto so it can get pretty sketchy depending on what part of the lake you’re on. 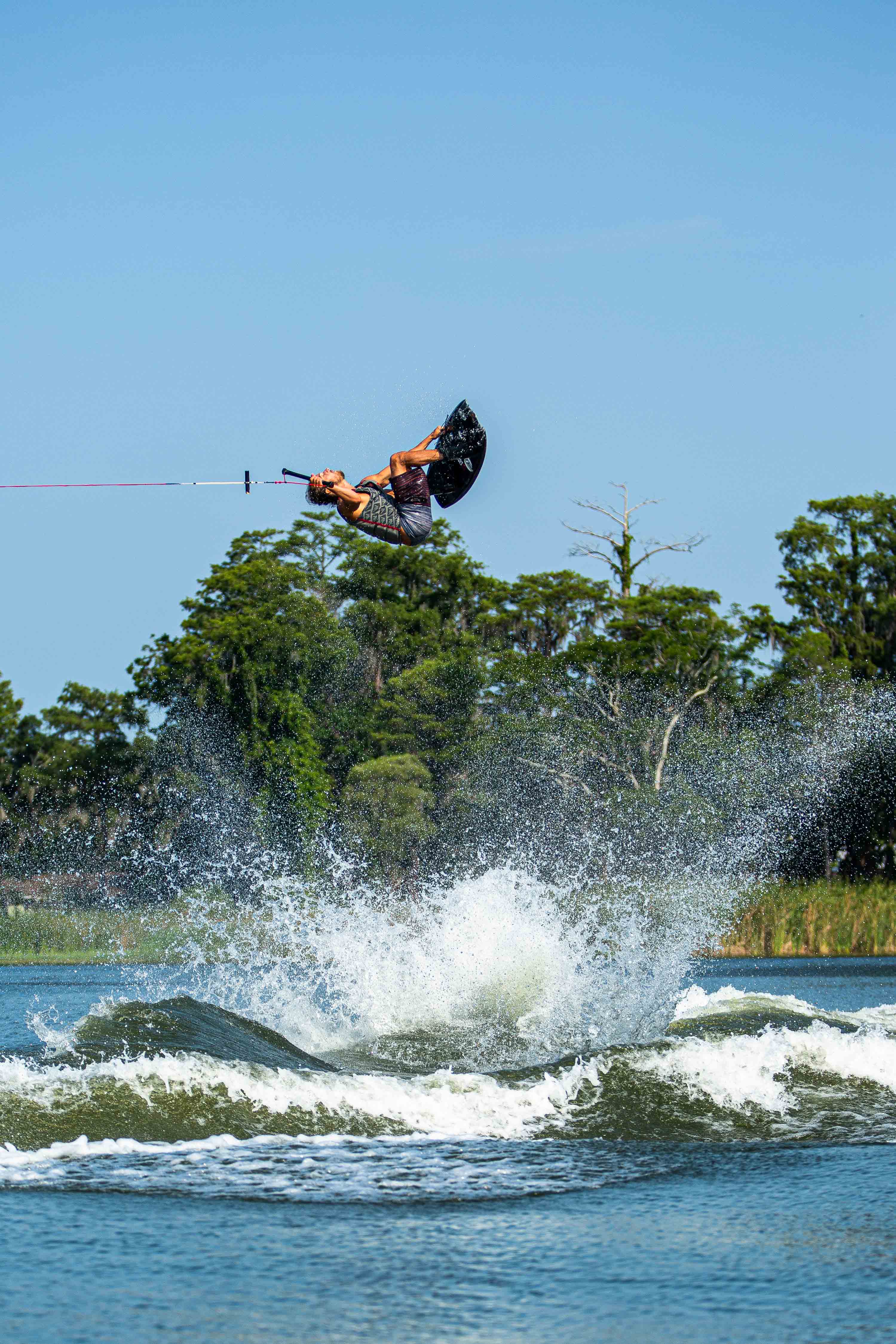 A: You guys have any funny stories about the area? You know, it is in “The Hood” after all …

J: I’ve seen some pretty crazy stuff but I think the most memorable one is when my neighbor and I were coming back home and we saw the pizza guy getting mugged right out in front of a house. The guy robbing him was super skinny looked like he was barely old enough to be in high school. He was like fake shooting towards the ground to scare him and we got out of there before it got crazy.

S: Well, you remember when Cody Hesse got jumped around here? This was a while ago and he was living at Shane’s but yeah, I remember that being pretty nuts.

L: I haven’t really seen too much yet because I haven’t been here that long but I’m sure some pretty crazy stuff goes down after dark.

A: We’ve seen clips and pictures of a crazy guy with a makeshift Iron Man jetpack flying around the lake over the past few weeks. Have you seen him out and about?

J: Crazy Kelman? Yeah, he’s the man. He was out the other day flying around with those home built foot thrusters. Seriously, it’s insane. It sounds like a damn rocket taking off. It looks like two big turbines on his feet. It’s unreal. He’s been on Barstool Sports for it so if you haven’t seen it, go check it out. I’ve had neighbors hit me up saying they thought a jet crashed into the lake because those things are so damn loud *laughs*. Turns out it was just him on a rope hovering over the lake trying to learn how to fly it. And now he’s just flying around wherever.

A: Do you need a permit for that?

J: Oh man, who knows how many laws he’s breaking with that. I’m telling you, the dude is insane! 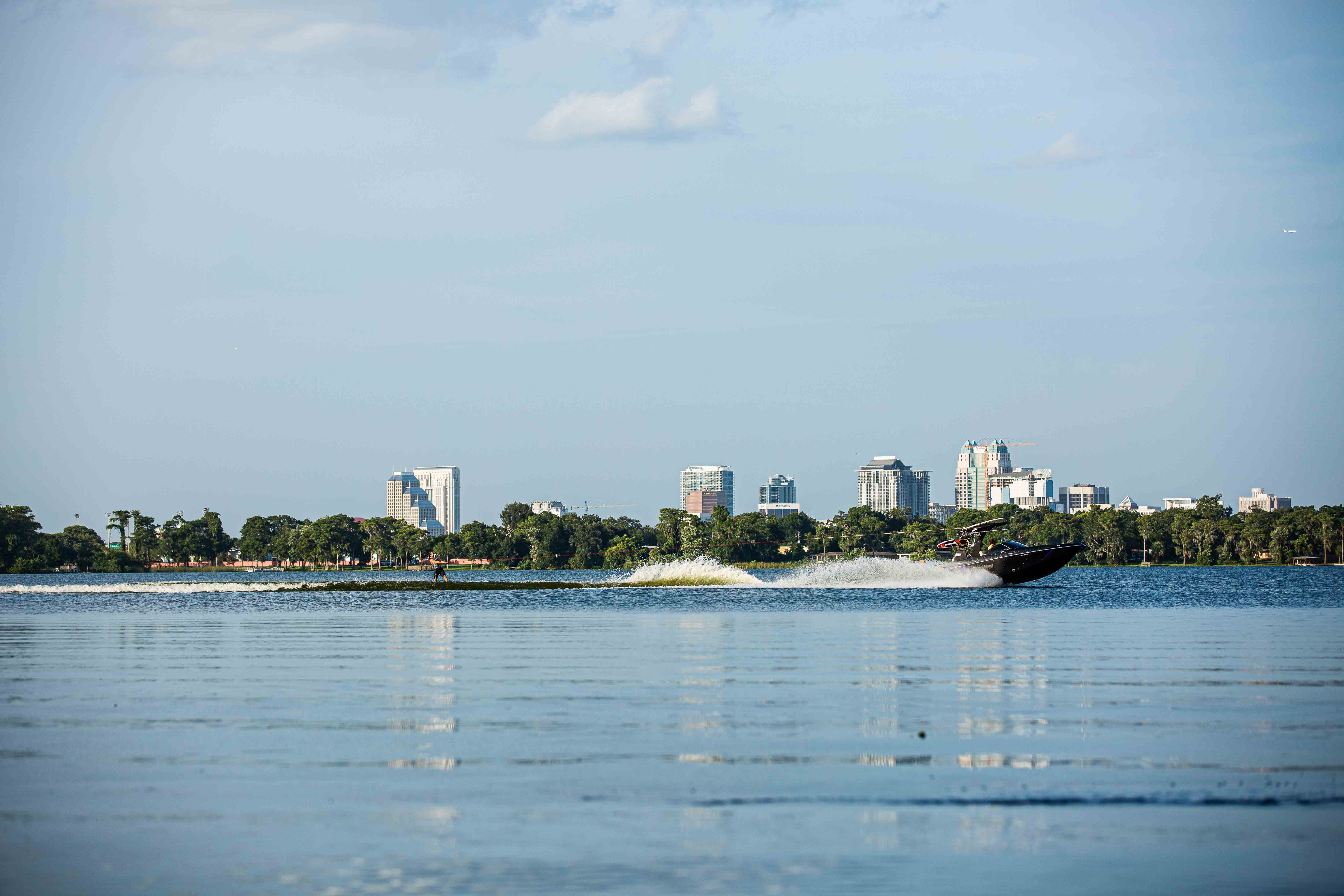 Pretty solid view if you ask us

A: Who do you feel like you’ve influenced, being in the position you are?

J: Besides people we’ve already talked about? I like to think Rocker Steiner. He usually comes out for a few weeks in the summer to ride and shoot and everything. He hasn’t been out yet this season because he’s been filming some project out in Texas, but I’m sure we’ll see him before the season is up.

L: Oh come on Pop! Think of all the good times we could have *laughs*! But for real, we’ve already got people coming over all the time so we don’t need anybody else staying here.

A: Let’s be real, there will never be another “Hotel Henny”… and we sure do miss it! But, it seems the torch has been passed to some extent. Jeff, do you feel like a full blown dad with all these grommies always coming in and out of your place?

L: Yeah, I was just gone a week and when I got back, Langley was just spread out on the couch listening to that depressing Billie Eilish sh*t. 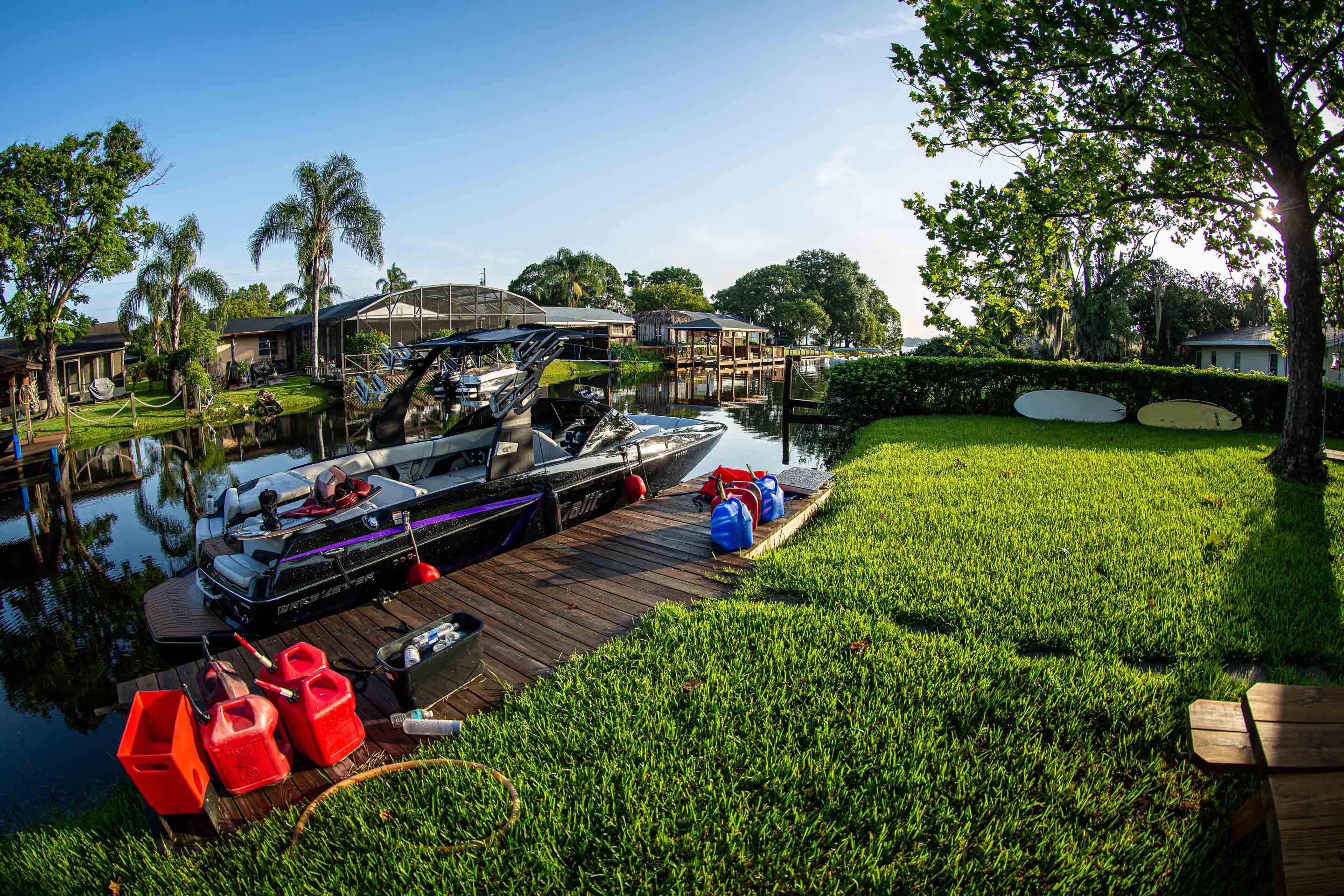 BYOG: Bring your own gas 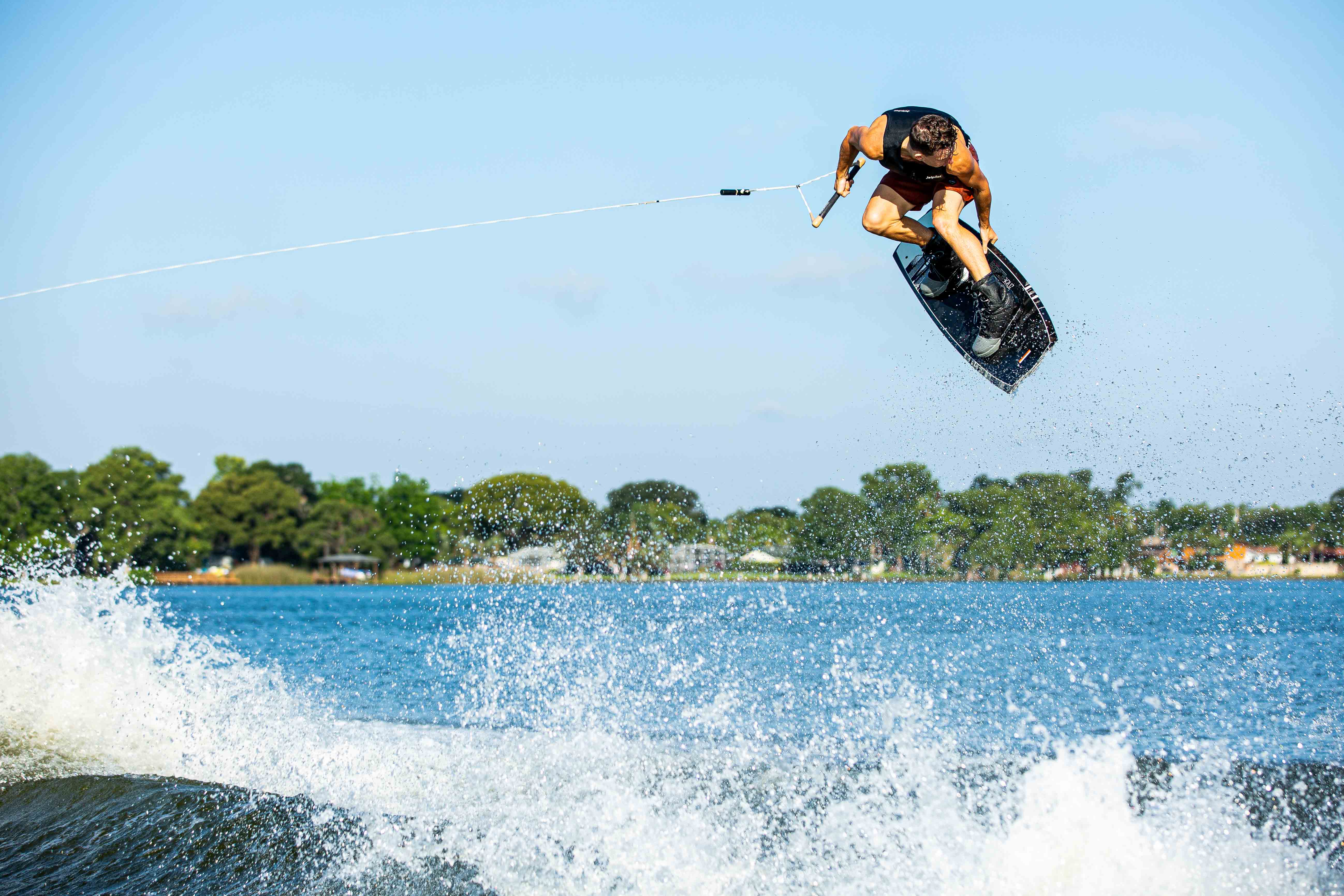 It’s definitely a struggle to pull Lewy out of bed for a morning session. But once he’s out, he always provides. 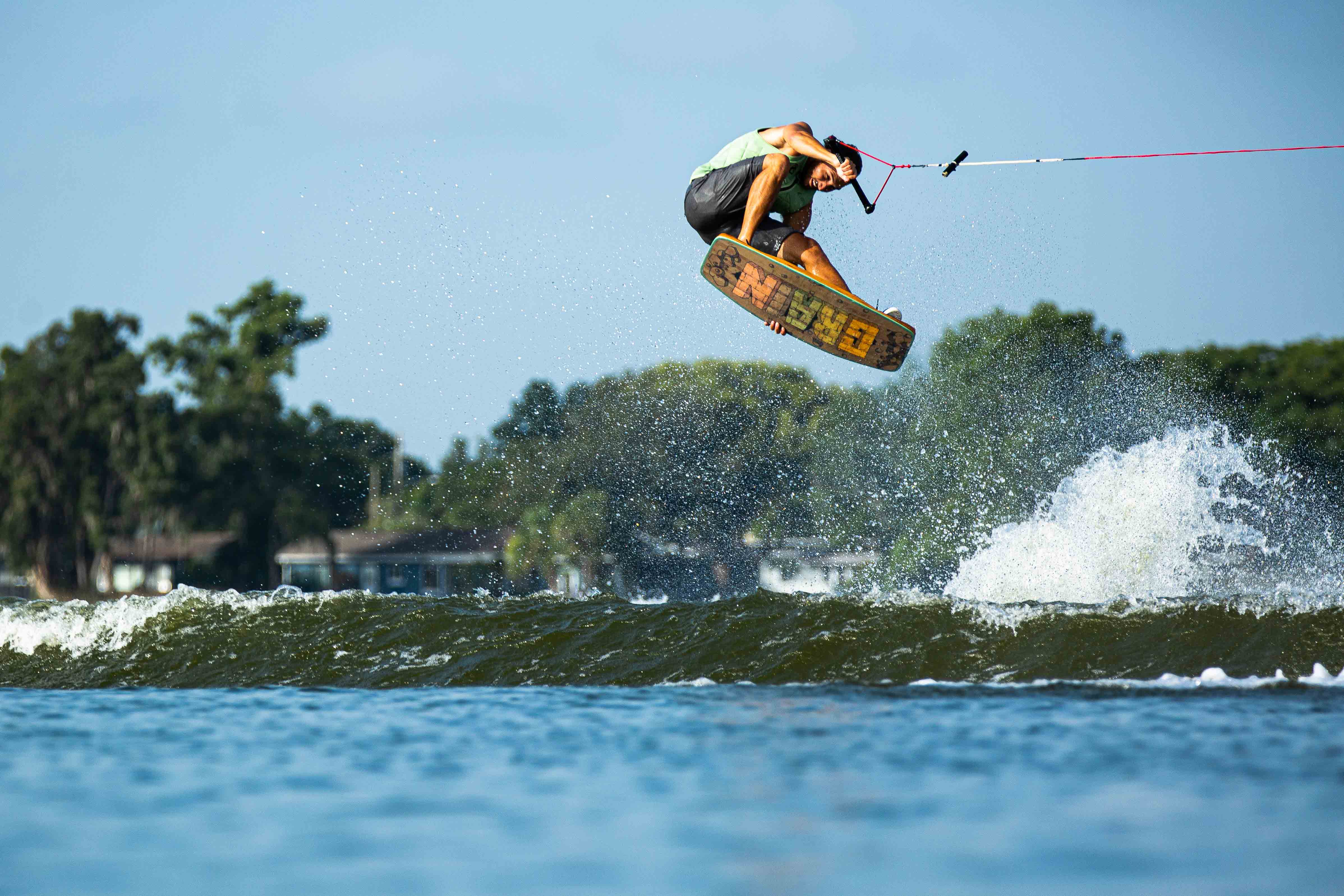 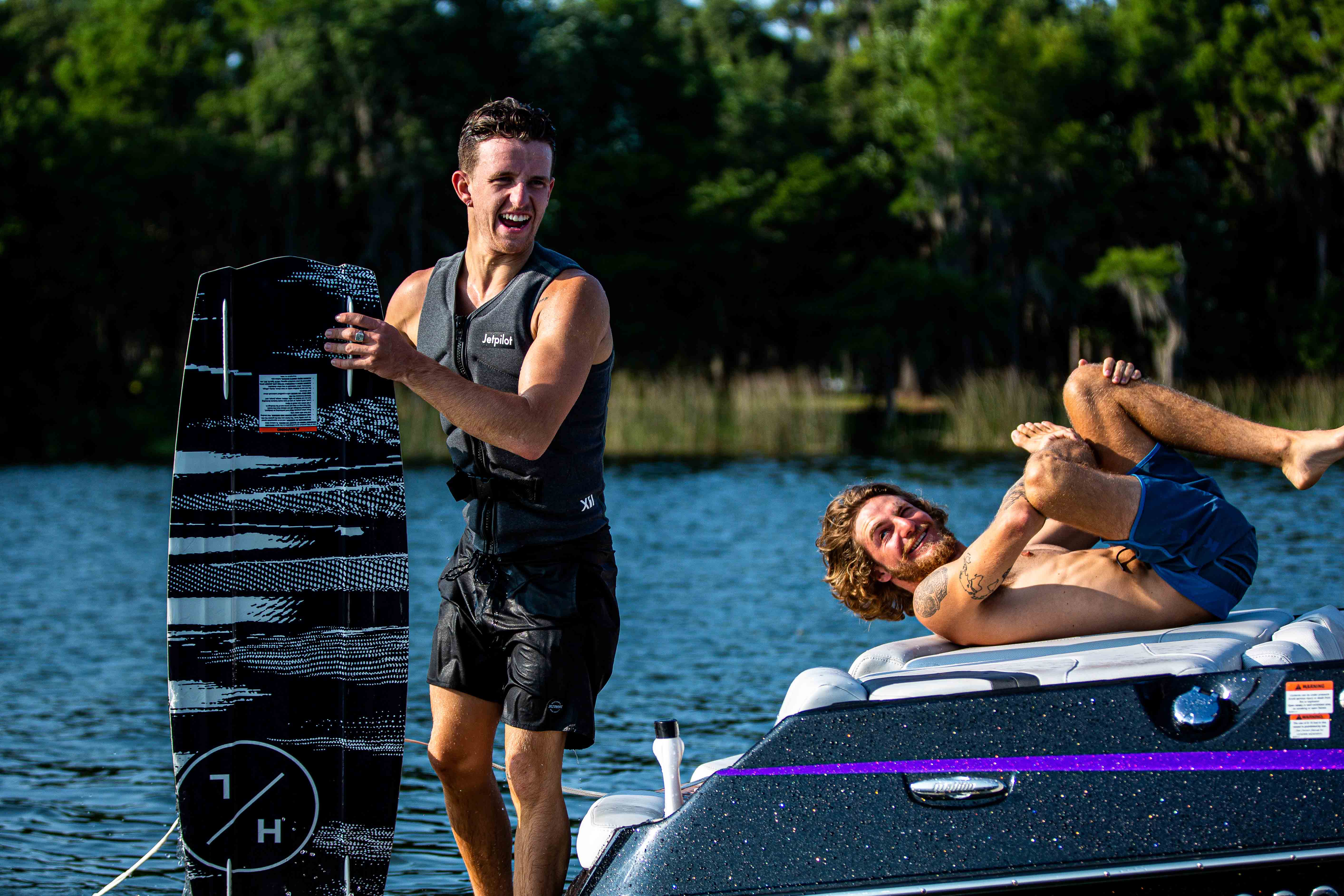 An Italian and and Australian walk into a bar… 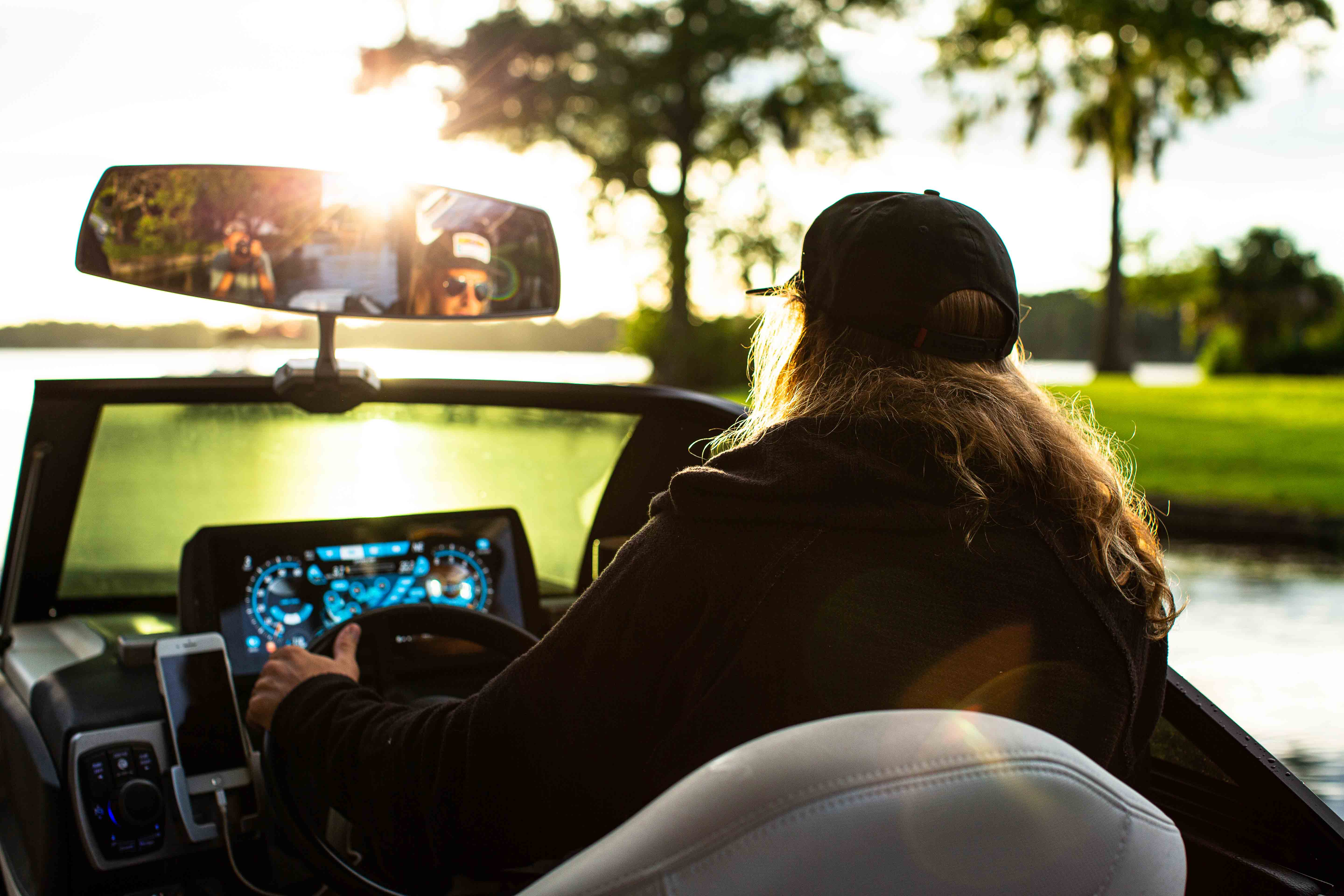 Jeff’s always been an early riser

A: Jeff, has all the young blood lit a fire under your ass to keep sending it? Lewy is a pretty good hype man after all.

J: It’s been good, yeah. Trying to make Lewy hit double ups and stuff like that. I’ve really been enjoying it honestly.

L: Double ups man … remember I broke my board on one the other day? Yeah, we’re hitting them all the time *laughs*!

A: Well, thanks for taking the time to chat with us guys. I can’t wait for the “Odd Couple” movie based on you two. Any last words you want to leave us with?

J: Clear Lake is the best. It’s not all about wakeboarding, it’s about having a good time out on the water with the crew around here. I mean just the other day we were out and had multiple longboards, dogs, tons of people, and had a solid party wave going. We do the “Hood Crawl” which is basically a pub crawl but at people’s houses. There’s always something fun going on.

L: I f*cking love it. Riding a sh*t ton, partying, and good times. Pop’s Place is the sh*t! 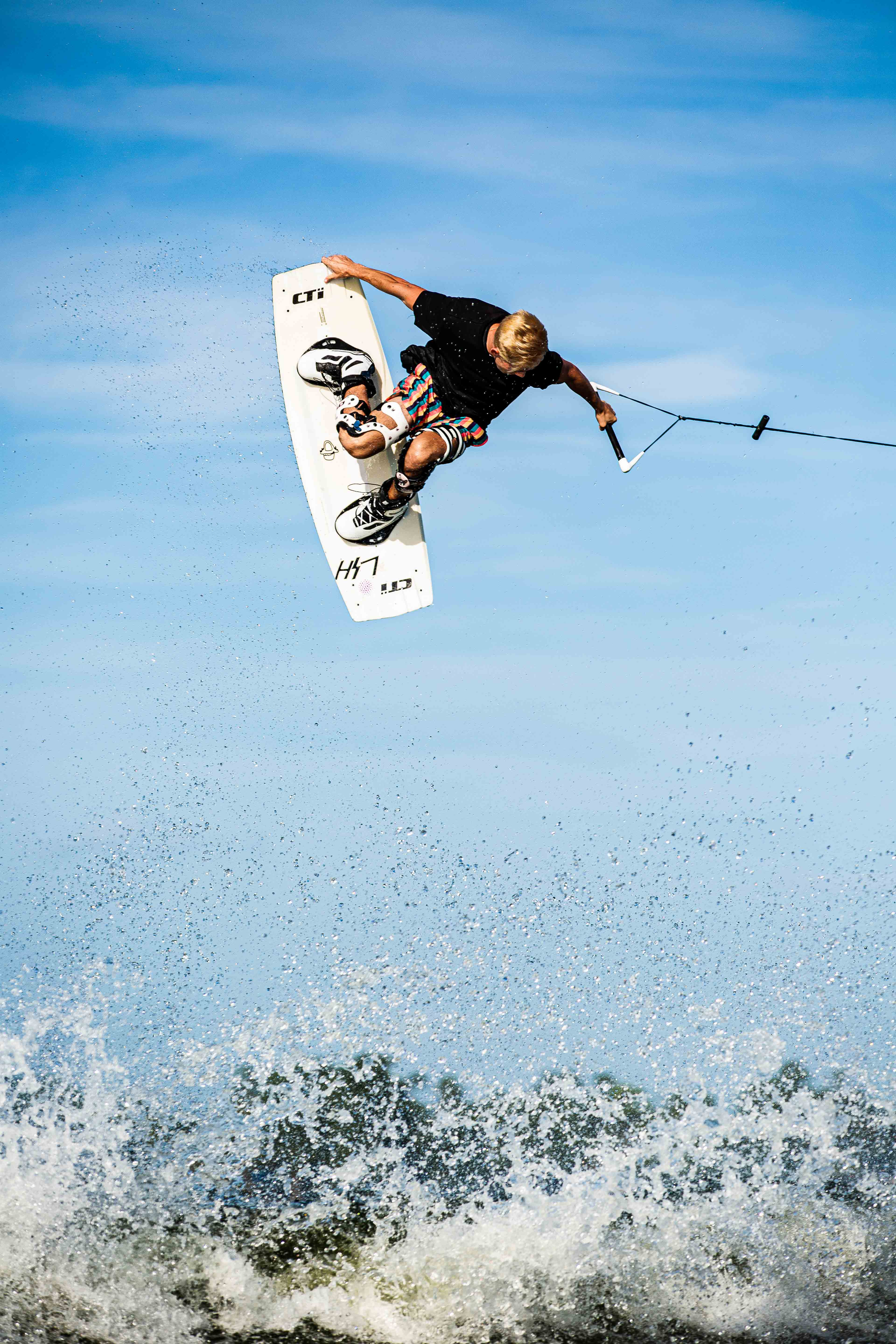 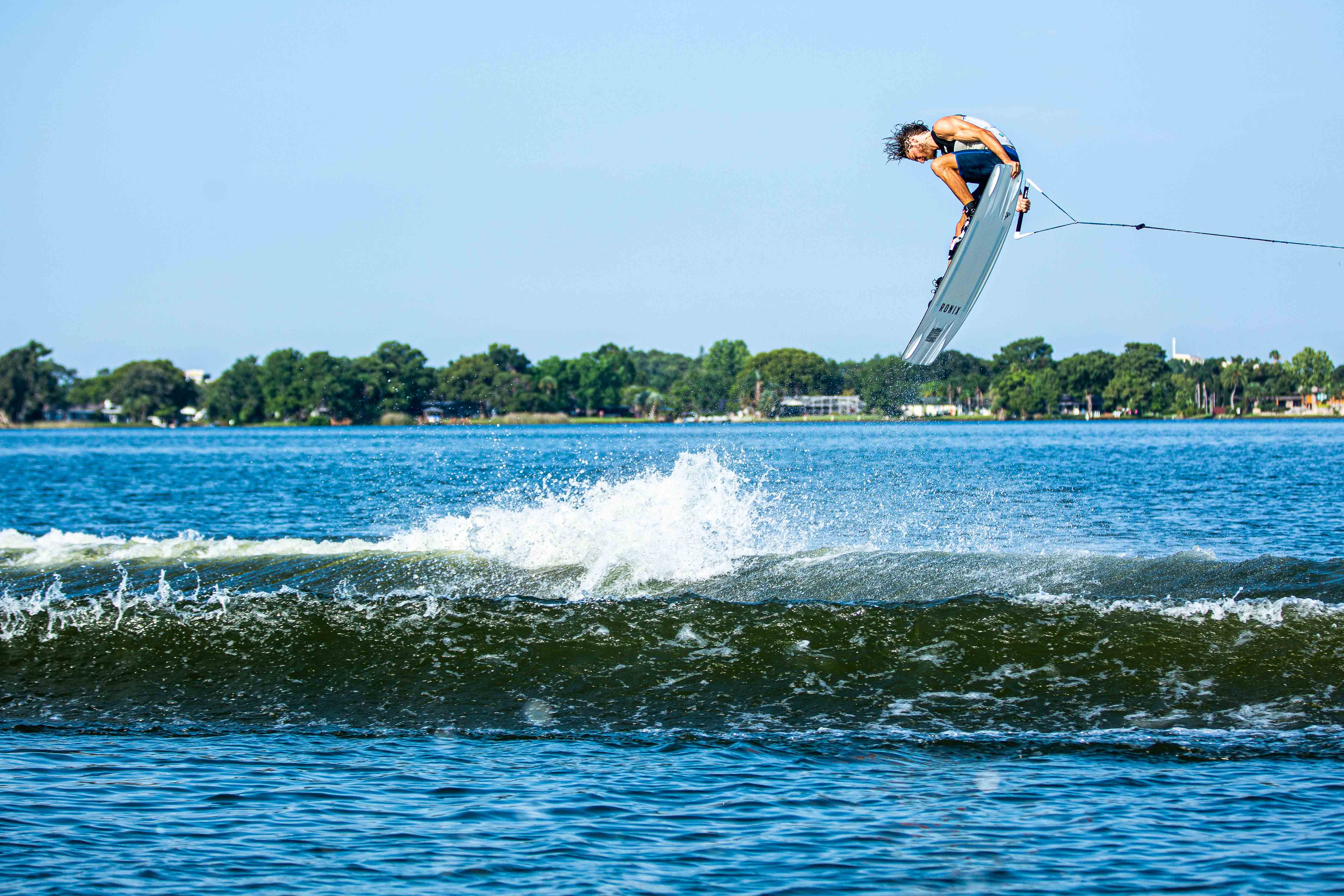 The Pizza boi is a frequent visitor at Pop’s Place 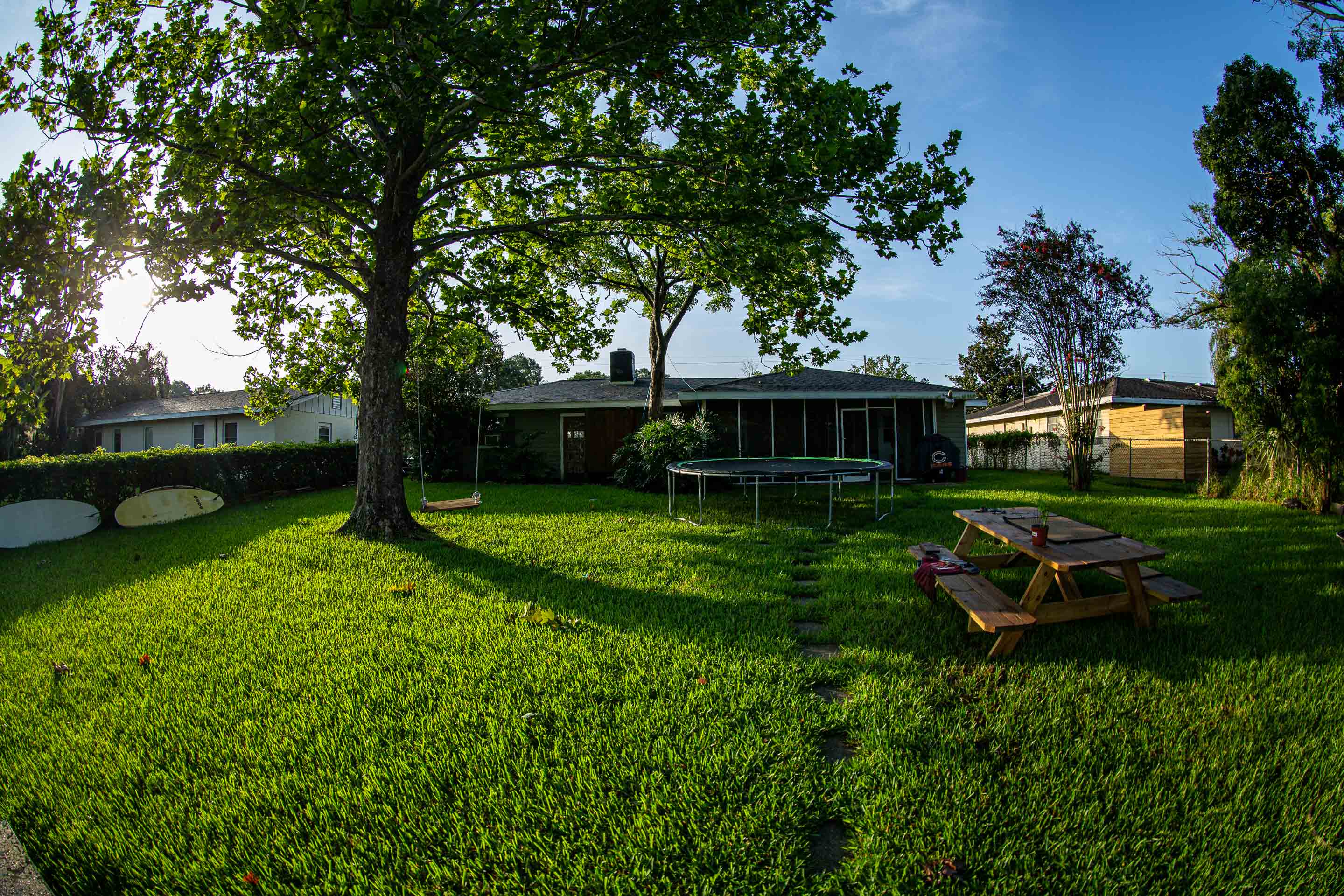 If this grass could talk…