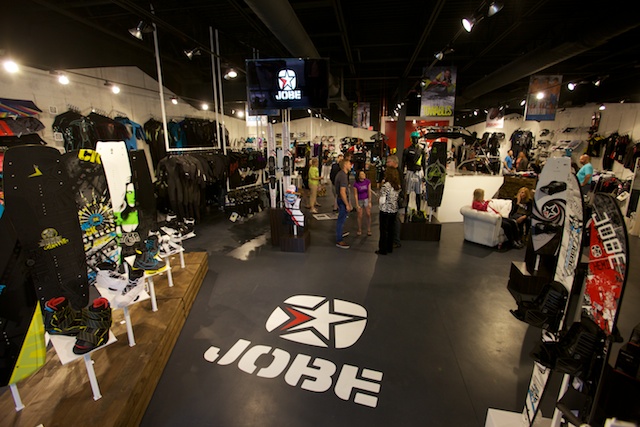 With what has to be considered a first of its kind for the watersports market, Jobe launched its concept retail store in Orlando today at 8031 Turkey Lake Dr. Suite 400. After establishing itself as one of the largest and most diverse watersports brands in the international market, Jobe decided it was time to come back to the U.S. in a big, unique way. The 4,000 square foot retail space features all of the products Jobe offers in its extensive line, from top of the line wakeboards and bindings, to wetsuits, life jackets, water skis, tubes, bags, apparel, and even an inflatable SUP board.

Despite a lack of cooperation from Mother Nature, the grand opening party was a big hit with neighboring restaurants and vendors like Whole Foods, Lime Fresh Mexican Grill, and Anthony’s Coal Fired Pizza serving free food and beverages to visitors. American pro team riders Austin Hair and Julian Cohen were on hand to show off some of Jobe’s latest offerings in the wake department. The space is organized in a very clean, functional way, making it very easy for shoppers to check out everything Jobe has to offer — there is even a lounge area with a TV for those who want to take a minute to just hang out.

If you’re in Orlando in the future, be sure to swing by Jobe’s unique store and check it out, you won’t be disappointed. For more information on the Jobe store and products, check out the Jobe website or Facebook page.