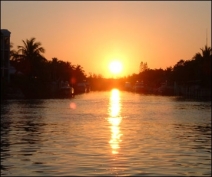 To paraphrase (from more places than you even realize), “Is this heaven?” No, it’s the Florida Keys. Home of a guy you only need one reason to like: because he’s him, Danny Hampson. The kid with the magical feet, and I seriously may start referring to him like that from now on, invited me down for the weekend to take part in a fishing tournament with he and his father, Tim, and Tim’s buddy from high school, The Z Man. The Z Man is the same buddy all of us have from high school — fun, funny, talkative and genuine, who has trouble ordering straight off the menu at restaurants and still likes to party. I’d go as far as to say it was the weekend of the Z Man, in my mind anyways. That is after I was able to get by how awesome Danny’s dad is. Here’s six reason why Tim Hampson is the best:

– He drove 270 miles to catch us fish for the tournament
– He came back after that and worked out for 45 minutes
– He will give you the shirt off his back, even though he doesn’t have to wear one because he’s in better shape than most 25 year olds
– He’s a better captain and fisherman than most guys I know who do it for a living
– He’s a great story teller
– He once saved his wife from being eaten by a shark with just a pole spear
– Bonus: He’s mystical as hell

Bottom line is that we won the tournament, and when I say that I mean that there were people who caught bigger fish than we did but nobody worked harder and wanted it more than us. Seriously, we were all so into fishing for two or three days I don’t think we will ever get it out of us. Danny caught the big fish in the pictures, pulled him up from the deep like he had electronic reels in his biceps and slapped him up on the deck. We were sure it was close to 40 pounds, but only weighed in at 30, once again proving the benefits of a low carb diet. What was more mystical was the way he ventured out at sunset tonight and did almost every wakeskating trick he knows how to do (on an old concave deck) barefoot. Watch for D to slip a barefoot set into one of his contest runs this year, or, as he says, “Get ready to make love to the water.” In the end, I found out the kid we call the Child of the Sea actually proves to be a creature of the Earth, or at least one hovering on a magic carpet a few feet off the ground, mystifying people, striking fear into fish, and loved by a dog named Tiki.