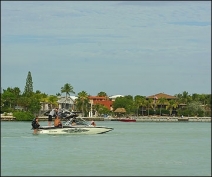 Hyperlite went to the Florida Keys to test out some new 2006 gear and Garrett Cortese went down there to take some photos and to write about his journey with the Hyperlite squad. They had problems leaving – it’ s never smooth when you gather a whole bunch of independent cats. There was a dog named Marco and someone wanted to yell “Polo” to get him to come to them, but if you’ve ever played the game, you know it’s a game of cat and mouse. Read – learn how to read – with our magazine.