How to Shape a Wakeboard with Jimmy Redmon 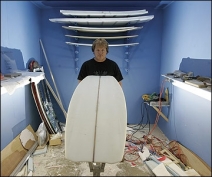 
Step #1 – Rocker and Thickness Taper
JR: The most important is the rocker. You have to determine if the board you want has a continuous rocker or a three-stage rocker, and if so, where is the break going to happen. In simplest terms a continuous rocker is a board that is smoother, more predictable, it makes the transition from the middle of the board to the tail in a lot slower and smoother fashion. It will create a board that, in many cases, will take a lower, longer arc off the wake, but it will also be easier to ride and set well into a turn and follow a very precise arc when turning. A three-stage rocker has a very definite break in the curve somewhere on either side of the middle. So what you have to determine is how wide you want the flat area and how much you want the break to be. The more abrupt the break is, the more abrupt the kick is that the board gives you off the wake and makes it pop in more of a straight up fashion. But that break can also make the board more twitchy and unpredictable and make it want to blow out from under you if the abruptness is too much, and can also make it stop dead cold, so you have to be careful to make that not too extreme.

Step #2 – Determining Rough Outline
JR: The second step is, simply put, length and width. Basically, you’re asking yourself, ‘How big is the guy that’s going to ride this board and what’s his ability level?’ If it’s a grom, you’re not going to make him a 138 and if it’s some dude that’s over 200 pounds he’s going to need a board that’s over 140 centimeters. Widths typically range from 16”-17 ½” and lengths are anywhere from 134cm-142cm, unless you decide to go wider, in which case you can go shorter. Because ultimately it’s all about how much surface area is underneath your feet and what kind of bottom you’re going to put on it to get lift, and that’s the next step.

Step #3 – Bottom Configuration and Fin Set Up
JR: The first question is, ‘Is this going to have fins that are attached to the board, or is this something that’s going to have fins molded into it?’ What that entails is if you have a board where the fins are going to be attached, you have to think about who the board is for. If it’s a more advanced model it will probably have a wider tip and tail, and a multiple fin configuration, whereas if it’s more user friendly, mid-level or below, you might only have one center fin because the tip pulls in a little. And on those kinds  of boards it’s all about designing something that’s going to give you some grip, help you initiate a turn, going to help the fin to set by somehow keeping the rail held in the water. And then it’s about putting something on the bottom of the board that’s going to keep it moving along, not slow down and keep it free on the water so that it’s all about unweighting it to be able to move it around. On a board that’s going to incorporate molded-in fins, you have to visualize where that fin is going to start – where it’s going to grow out of the board and then disappear back into it, and how that going to help the board. Usually with a molded-in fin they’re gong to work with some other design element within the bottom contour – rolling up out of a concave, growing out of a channel or something. Rarely do you see a molded-in fin on a board that is just stuck on as if it was just a glassed-in fin on a surfboard. In the simplest terms, a concave provides lift and a channel provides hold. Look at a concave like a spoon, and in the opposite terms, a convex like the bottom of a spoon. If you run water into the spoon it will want to lift the board up, where in contrast if you run it over a belly it will want to stick to it and it would typically be a slower board. A channel acts like a controlling surface, it’s like a miniature edge for the water to crash into and then be redirected along and will provide hold. And depending upon where you place it and how deep it is determines where the board is going to grip and how much it’s going to grip.

Step #4 – Rails and Edges
JR: Typically the rail is the curved area where the deck stops being the deck, and the bottom stops being the bottom. It’s that area where the board surface rolls from the top of the board all the way down and around to where the parting line is and back around to what is then the bottom surface of the board. Whereas the edge of the board is typically the underside of the rail, it’s the bottom of the rail. It’s the point where if the water was sheeting across the bottom of the board the water would either wrap around or release off of. And what you do in shaping is determine what kind of rail and what kind of edge you want. Do you want the edge to be all the way down on the flat bottom of the board, or sharp, or have a radius, or be lifted so that you have a vee or put a slight beveled edge that helps make the board roll into a turn a little easier and make it a little more forgiving so that you don’t have the dreaded “toeside edge catch.” And then the rail from the top is a functional element where you flow the deck into the bottom and determine the volume of the edge of the board which is going to decide how deep the board will sit in the water when you put it into a turn. Is it going to sit high because you have a lot of volume in the rail, or is the board going to roll on edge and sink deep and really commit into a turn because you’ve made it smaller?

Step #5 – Materials and Glassing
JR: Typically all wakeboards are glassed very strongly, especially during prototyping so that they don’t break before the rider can see if the design is right. The basics behind it are that you cover the shaped blank with different layers of fiberglass cloth to build up strength and stifnesses in certain areas of the board. You’re also setting in where you want your inserts to be so you can set you bindings. You cover the whole glass with polyester resin or epoxy resin, depending on what you want out of the board and at this point you can also decide if you want to add any carbon fiber or any kind of exotic materials if you want it to be stiffer. And then you put this gooey mess all over the fiberglass cloth and squeegee it out, one side at a time, wrap the rails, and then you’re left with a glass board that has a rough finish to it. And you trim it, sand it, smooth it and let the thing cure for a couple of days.