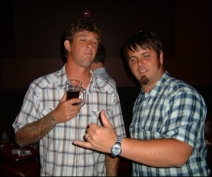 If you check the What’s Up section of this website from the other day, you’ll see that I made some predictions regarding what people would wear for the big night. But first, let me say that Genetics was not bad at all. It was an extremely accurate representation of what goes on with the guys that work at the Projects, and had a surprisingly fresh and re-windable opening section featuring Pat Panakos. He rides that Roam board like a snake. Ryan Doyle, Keith Lidberg, Robby Jakes and Brandon Thomas all had more than respectable sections, too. B.T. is really, really good at wakeskating. I’d suggest you get the movie when it comes out, it’s highly entertaining.
But on to my Mr. Blackwell list. I have reprinted it below along with comments about how accurately I guessed (see attached photos for the proof):

“Scott Byerly will be wearing some kind of collared shirt, because it’s his birthday and his wife will probably make him dress up so they can go out later.” – Scott was wearing a nice, plaid collared shirt, although it is unknown whether he went out afterwards. His wife was dressed up and looked hot as usual, so maybe they at least went out for one drink or something afterwards. Scott and I had a quick talk about how hard it is to remember our ages anymore. For the record, he is 32. I think that’s what he said, I can’t really remember.

“Shane Bonifay will probably be wearing long pants and basketball shirt with no sleeves.” – Long pants, yes, but he had a t-shirt on. He did smell good though.

“Parks will have a head band on, without a doubt.” – Could not have been more wrong. How was I supposed to know that this was the one night in the last year that Parks would not be wearing his white hair tie? It must have needed a night off.

“The Projects Crew, whose movie it is, will probably be wearing some kind of team outfit. Panakos is a costume guy, always has been.” – Pat was actually wearing all Pointless gear (I didn’t know they were making distressed denim?) Nice. He also had a sweet “P” belt buckle, although I don’t know if that was for “Pat”, “Projects” or “Pointless.”

“Chase Heavener will probably be wearing some sort of long sleeve shirt, even though it’s warm outside, that he bought four days ago and hasn’t taken off since.” – It was a black long sleeve, Banana Republic I’m guessing, but Chase informed me that it was at least five years old. Meaning has has washed it before, probably.

“Lauren Loe will be wearing some kind of ironic t-shirt that she got at Urban Outfitters that has something about boys written on it.” – No, I was off on this one, but Lauren looked very sophisticated. I wonder what boy she was trying to impress? He must have been an older man.

“Jack Blodgett – no telling. I’m going to say wristbands, though.” – He must have been with Sharpe. Rusty was the only one who showed up from their crew, and he was wearing all black, as usual. He’s huge right now.

“Keith Lyman, if he shows up, will be wearing something that he Bedazzled.” – Lyman never goes out. What was I thinking?

“Danny Harf and or Shawn Watson – flip-flops, guaranteed. Danny may even have golf pants on with his flip-flops.” – Danny actually dressed nicer for this event than he did for Nick Weinacker’s wedding.

“Keith Lidberg will be dressed to impress … the ladies.” – He was, but I was told by some ladies that they would rather he walk around with his shirt off.