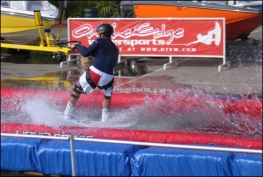 Wakeboarding on land, that’s just weird. But slider events are common and involve the word “jam,” which perks my attention. Boat shows like the Fred Hall at the Del Mar (CA) Fair Grounds this weekend need some more exciting action, and the slider challenge was where it was at — almost. Friday afternoon wasn’t the kick off to everything; the show began Wednesday with the weekend attracting more of a crowd.
We were there on St. Patrick’s Day, spectators and even some of the riders were sporting their green. Watson’s Billabong board shorts were festive and had a gambling edge, very appropriate since the set up was near the Del Mar Race Track. I know you don’t care what everyone was wearing; you care about the slider show down. The set up was 200 feet and consisted of an A frame and a box slider. Each jam session (occurring twice daily) was judged separately under a relaxed structure. Overall crowd response determined the winning rider. Aaron Rathy was often the crowd favorite and respectfully so; he nailed some pretty sick tricks and was the only one of the riders to wakeskate. Kevin Henshaw’s performance was also a crowd pleaser. The informal results put these two riders coming in on top. Other riders were Shane Bonifay, Erik Ruck, Watson, Collin Harrington, Chad Sharpe and more. The winch was pulling these boys like a champ and there was even some fancy announcer dude from ESPN, Jeff Barton … he really pulled it all together. Overall Fred Hall’s rail jam in Del Mar had talented riders; a pretty decent set up and the “Bongo” girls drunk and cheering from the sidelines.