Don’t Touch Me Right Now: Coping With The Season End Of PULL 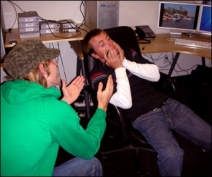 It’s done, we finished it, and it’s over. Season 1 of Pull is a wrap. All the episodes are in and now there are thirteen glorious wakeboarding and wakeskating shows on Fuel. So why am I still having panic attacks and wetting my bed at 5 am, worrying about mastering show 7? I am writing this from my urine soaked mattress at 5:53am, trying to examine what we have accomplished here, and why it is so hard to let go. I mean, Keith has these crying bouts and what he describes as day terrors, but he doesn’t know where they are coming from or why, I think we all know why.  He is seeing phantom hard drives, making up figmented final cut crashes, but I think that is just to get attention. Yesterday, I pitched an idea for a segment for our show to this life size woman robot that I had constructed during the season out of used Red Bull cans…. she has yet to answer me on that, or any matters of the heart. Both of us are having trouble getting back to norm, or to use a super hip technical industry term, having trouble “defragging’”.
Keith pulled a knife on me yesterday asking if we had turned in the deliverables for show 25. I calmly and quietly talked him down explaining that we finished almost three weeks ago, and that there is no show 25, and office violence never solves anything. The cold blade resting upon my Adams apple got me to thinking, what has become of us, why such violence and panic. Have we gone through an unnoticed physiological change, is this any sign that we have become a part of the show itself. Are we having the most severe undocumented case of separation anxiety?  We should be relaxing and relieved, because it is done, but we aren’t…and there are signs that it is spreading to other departments. The other day, William, the art director for our magazine, came in while Keith and I were talking though a “spell”, and he said he had extreme anxiety, and it showed with the commercial size tub of mayo he was eating by the handful. There are clues that we are getting back into the groove, like the fact that I saw the sun the other day, and it was glorious, Keith told me he watched television, like real television with reality shows, and drama and stuff.
So for now “We don’t have a damn TV show to make!”, and it feels good, but don’t think we are sitting poolside sporting only the finest of Speedos, sipping butter rum, while I receive sensual massages from Christina Applegate, circa her missing drug offense years. We are going to be getting ready for next year, and seriously get ready. People always say that, “Get Ready!”, what idiots.
All in All, it is safe to say that Pull has taken Keith and I to some great locations, with great riders, and great people. We have met some amazing people along the way, and all of us would like to thank every one that helped out in doing this series.

If anyone sees Phil McTaggins tell him he owes me $3,000.