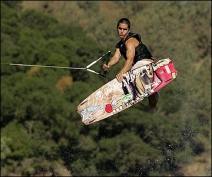 Alliance: Merry Christmas and Happy New Year. What have you been up to during the off-season?
Daniel Doud: Since I moved from the coast to the valley, I’ve been up in the mountains snowboarding; I miss the ocean but it’s nice being close to Tahoe. I like cruising off-trail and getting long, steep lines. I’ve been skating as much as possible, too. There are a lot of fun parks around. When I went home for the holidays I finally got to skate the new Los Osos cement park. That place is sick, big transitions and really fast flow. I’ve just been having a blast lately, even getting some winch action. Spring semester at school started so I’m also back to the books.

A: Do you think myspace is a waste of time or do you think it can be helpful? Why?
DD:  I’m not too sure about myspace. I haven’t thoroughly explored it and I’m not sure  that I want to. Kyle made me swear to never use it, but I did create a name so I check it out. I can see it being useful for keeping in touch with good friends or promoting a band.  It’s a simple medium to actively communicate through. People say it’s a great way to meet chicks, but it seems that some people take it way too seriously. I’ve met random people that know my friends really well but have never actually met them face to face. I think it’s weird in that respect.

A: What five albums or jams have you been listening to?
DD: I listen to a good mix of music but these have been playing lately:
Bouncing Souls – Live
Grouch – Crusader for Justice
Social Distortion – Somewhere Between Heaven and Hell
Iron Maiden – Dance Of Death
Pepper – In with the Old

A: What do you have planned for this up coming season? What are some of your goals, trips, boat shows, etc. this year?
DD: I want to travel out of California some and just ride as much as possible. I will definitely be hitting up the boat shows. We did an indoor slider demo at the Fred Hall Fishing, Tackle, Boat and Travel Show in SF. The show was a lot of fun and there’s another in San Diego. I’m looking forward to events like that; it’s cool to show our sport to new groups of people. I have a goal to film more for next year. I really want to spend a good six to nine months filming and make it legit; no weekend filmers for me. I hope to spend a good amount of time at West Coast Camps. My riding always improves there and I always feel welcome; it is such a progressive environment to wakeboard in.

A: What are three things that you like about riding behind a boat?
DD: Hitting double ups, bottom turns in the flats, and girls in the back of the boat.

A: What would you tell me to do here? Okay, my girlfriend has asked me to go on spring break with her to Maine and Vermont. But I just booked a trip to Alaska with a really good friend during her spring break. Side note: I’ve been to Alaska three times and have lived there for two summers.
DD:  You broke a promise to your girlfriend and made plans to go to Alaska with a different girl; I bet you feel like an ass. You should convince your girlfriend that Alaska is a dangerous place and that you need strength in numbers. Roll off the plane in Alaska with a girl on each arm, feed a grizzly bear some salmon, then party your spring break away in darkness while riding a moose.

A:  If you got 10 dollars a day for the rest or your life, what would you spend it on? And you can’t save – it disappears if you don’t spend it all.
DD: Ten dollars a day isn’t too much money but I would spend it on gas, gas, and more gas. On a mellow day I would buy a six pack of, umm, sodas, preferably Sierra Nevada and a good carne asada burrito.

A: What would you say to a kid that is just getting involved with the sport?
DD:  I would tell kids to wakeboard for fun and don’t take it too seriously. Progression isn’t doing the hardest trick you know. Progression is learning to understand and appreciate the simplest aspects of riding a wakeboard. If you can do that, you can make the hardest tricks you know look and feel good.