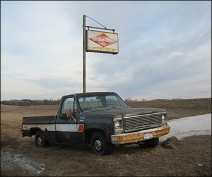 Winter sucks. It’s cold, snowy, icy and generally unappealing for putting a boat in the water. Even in Florida it’s less awesome for being on the lake than say, summer. Hopefully global warming will take care of winter once and for all, but until that happens, it’s months of bad weather for all of us.
But you know what winter is good for? Driving across the country. When you are a little afraid of people like I am, it’s a great time to check out all the tourist attractions without the pesky crowds. Sure, some of them are closed, as are the hotels, restaurants and gift shops around them, but you can be sure they won’t be crowded. Another benefit of driving cross country — and this one is good any time of the year – spot hunting. It’s a little more realistic for skateboarding than waking, but hey, you might never know there is a sweet lake in Sprague, WA if not for a trek across the continental U.S.
I set off to seek out spots, check out non-crowded attractions and oh yeah, make it to the other side of the country. Picking the right route is important in the winter, after all, who wants to get stuck driving a Corolla through a blizzard without snow tires? I deliberated for awhile and finally settled on 70. Since I was starting in Vermont and ending in Oregon, it was only slightly illogical. But as I drove through Southern Indiana in a snow storm, I realized that only 10 is a good route in winter, and it was all kind of a waste. So, when I hit Kansas City I banged a right and started heading towards Canada. Cause hey, if it’s gonna suck on 70, I might as well have it suck on 90 and get to see Mt. Rushmore.
In the Midwest there are tons of “spots.” They are all over next to the freeway. Granted they aren’t big enough for a boat or a jet ski, or even a winch for that matter, but they are filled with crap from the cows that drink from them. I wasn’t discouraged by the lack of epic waterways though, because we were soon in Wall, SD, home of Wall Drug. At Wall Drug you can get anything from expensive Western Wear to bear skin rugs and coffee is only a nickel. The only problem was it closed at 6 p.m. and we got there at 8. It was a great opportunity, however, to hang out in the sweet town for a whole night and really experience the culture. And since it was Super Bowl Sunday, both of the bars were hopping. We picked one and had soon made friends with the owner who kept telling me and my friend we were “better than the Super Bowl.” He also gave us free drinks.
The next day we excitedly headed to Mt. Rushmore. That’s the one with the Presidents’ heads in the side of the mountain. Hopefully your parents didn’t take you there when you were young and ruin it for you, because the place is kind of amazing. Plus you feel a renewed sense of patriotism, which is always good. We even broke into a stunning rendition of the National Anthem.
After Rushmore it was time to get there, but more importantly, we found one of the first spots you could actually put a boat into. It was a lake in Wyoming and I think maybe once a year the water gets glassy. That’s the other thing about those flat states, they are kind of windy. But still, good to know it’s there and if I am ever towing a boat cross country I will totally stop.
We made one more stop in Missoula, MT so we’d be rested for the big last day. And it was on the last day that we checked out (okay, drove by) Coeur D’Alene, ID. Despite hating people of different cultures, this town has a neat lake that would be fun to slaysh on if it wasn’t winter. Finally, we hit Sprague, WA. The lake here was deserted, glassy and beckoning to be ridden. It may have been because it was February, or it could be because the only place to work is the Viking Drive-In, so the locals probably don’t have the funding for boats, but I’m going to proclaim Sprague the new Lake Powell. And since I now live in Portland, it’s just a few short hours away so I will totally be there all summer.