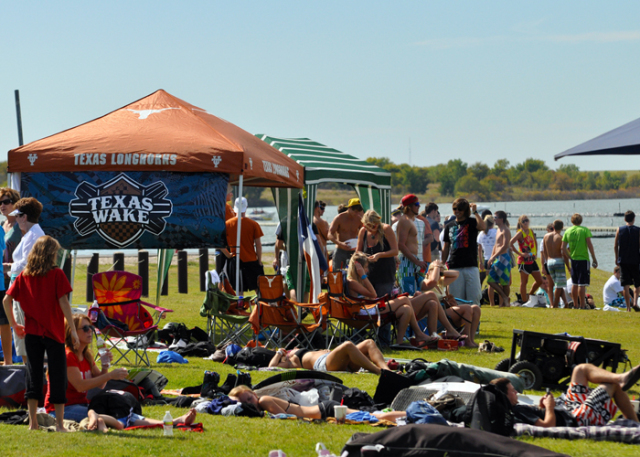 The Collegiate Wake Series is only in its second year and the second stop of the 2010 tour pulled 91 riders from 7 Texas teams. They came from every corner of the state to compete as a team and state their claim in the top 16 in the nation.

Texas was there to defend their title, and that they did. This team hasn’t lost any of its power or skill.  They have most of their 2009 championship team back and added some new comers such as Holland Finley. They took first with ease placing riders in all the top divisions.

Returning rider Steven Cahail still looks to be the number one rider in the country taking first in Open over Ross Pearce and Rob Muff from Texas Tech.

Baylor Wake also made a statement. Last season they were brand new and brought 5 riders to Beaumont TX.  This year they brought a full team and rode their way to second place and securing a spot in Long Beach CA.

Texas Tech and Texas A&M once again battled out an extremely close event leaving  Tech 3rd and A&M 4th.  Tech produced solid wins in Intermediate and Open showing that they have strong riders in the upper divisions which helps build their championship team for April.

It was a huge weekend for everyone as College Wakeboarding continues to grow rapidly. Big thanks to all the sponsors who make these events fun for the riders: Wet Sounds, Buywake.com, Trick Towers, Cobian Sandals, Indo Board, Red Bull, Launch Gum, and Pro Tec Helmets.

For all the results and photos please visit www.CollegiateWakeSeries.com