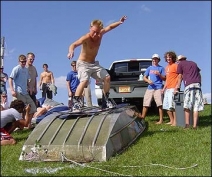 This past weekend, the second annual Collegiate Nationals was held at the OWC in Orlando, Florida. In anticipation of the most super radical event of the collegiate tournament circuit, some of the other riders and I practiced “getting in the college state of mind” throughout the entire week prior to the event. When Saturday morning (11:45 a.m.) rolled around, I noticed it was a bit nipply out, not quite sweater-vest conditions, but it definitely called for the Birkenstock sandals and two of my finest collar-poppin’ polo shirts. I packed 180 pals of mine along with two females into my car, and then we unpacked it all because I don’t have air conditioning. After a quick vehicle switch, we were on our way. Pulling up to the event was comparable to a child being unleashed in a candy store. There was enough beer pong, keg stands and croquet to last the entire day.  Oh yeah, people were wakeboarding, too. My favorite part of the day was when we found out the pro men semis were getting moved to Sunday, because the contest was running behind schedule. Once the kegs ran dry, people started disappearing to the trunks of their cars and the Porta-potties, never to be seen again … just kidding.
Sunday was a little different story, it actually had to do with wakeboarding (at least for my friends and I).  No one wanted to even be near a keg due to the events of the previous night — instead we threw on our game faces. This tournament was by far the best collegiate event to date, with kids from 20 different schools stepping up their game and bringing some serious maneuvers to the table. The pro men’s division was quite a show, with riders like Loren Levine, Josh Palma, Steve Edwards, Scott Hopkins and Jay Prock showcasing their most insanely technical stunts off of the Supra’s wake. The best part about Sunday’s event was that the winning team got a golden beer mug that says something about 1st place, I’m not sure, but I think you could have fit 40-ounces of soda in that thing. I would like to thank Barrett Pearlman for organizing the greatest tournament of all time.