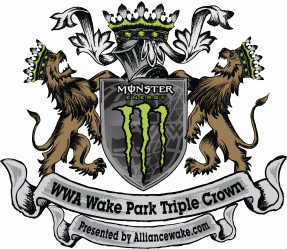 From Tampa, FL (July 1, 2011) — McCormick’s Cable Park in Tampa, FL is set to host Stop #2 of the Monster Energy WWA Wake Park Triple Crown Presented by Alliance Wakeboard Magazine on July 22-23. This progressive event series is known as the most competitive cable park series in the World.

Top wakeboarders and wakeskaters will travel from Australia, Asia, Europe, and the Americas to compete and enjoy the festivities. And if you follow McCormick’s Cable Park on Twitter or Facebook, you know they’ve been avidly building new obstacles and tuning the cable to ensure that every detail is double checked.

This stop will offer something different than ever before, as this will be the first time a clockwise-rotating cable will be used in the Triple Crown. Even the top riders in the world will be challenged, yet excited for this change in format. “With a left-foot-forward cable in the mix, it’s really going to show some diversity in both wakeboarding and wakeskating,” current Triple Crown champion Tom Fooshee said. “That’s the best part about the Triple Crown, the overall winner is going to be the absolute most versitile rider in the whole world.”

Click Here for additional information regarding the Triple Crown!!!