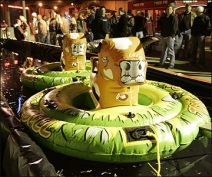 Some people I talked to were skeptical of that title for a contest, but if you’re a fan of Dwight Yoakam it has to remind you of his song “Guitars, Cadillacs and Hillbilly Music.” And if you are a self-respecting country music lover, you better have some of his CD’s, because he’s about the last C&W musician that did anything right. Toby Keith and his brand of corporate pop cowboys are all horse manure compared to Dwight Yoakam. Maybe event organizer Bill Geiger of the Texas Wakeboard Association is a fan too, and that was the reason behind the name for his weekend rail jam in Dallas this past Saturday night. Or maybe he just has a way with words. Whatever the reason, he was a little premature with the “bikinis” part; it was the coldest night of the year in Texas. But that didn’t stop locals and pros alike from gathering in the parking lot of the infamous Gilley’s nightclub to hit a rail and then go inside to warm up and ride some mechanical bulls. Shane Bonifay was silently impressive on the rail, but the best trick went to George Daniels for his back board 270 out, even though George was having trouble walking because of the … cold. The guys that were really good at the rail all must have been named Joey, because I heard that name about every five seconds followed by a big cheer. Local pro Gabe Lucas was there and killed it as usual, too. Chad Sharpe won the bull riding, beating all the Texans, who didn’t take it nearly as hard as I thought they would. In fact, it seemed like most of them had never seen a mechanical bull. Best dismount would have to go to Nick “The Scorpion” Weinacker, who couldn’t quite match the time put up by an editorial counterpart who shall remain nameless. Honestly, Nick didn’t even know he was in a contest, but the older some people get, the more they have to prove they can still hang with the young dudes. Word of advice though: if you are going to ride a bull, it’s a good idea that you don’t own a pair of testicles.