Behind the Shades: Scott Byerly 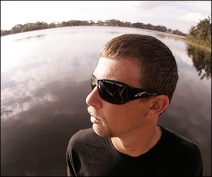 The man, the myth, the Godfather – for years you’ve heard all those accolades about Scott Byerly. Only two of them are actually true. So what does Scott do when he’s not shredding gnar? Setting trends. That’s what a trend setter does. I went over to his house the other day to take some pictures of him wearing Arnette sunglasses for an ad. At first he was just sitting there – chilling with some friends and watching some tube. So effing legendary. He went through the box of shades Arnette had sent out, picked which ones he wanted to wear for the shots and proceeded to model with the professionalism of Derek Zoolander. We’re talking way beyond Magnum here, even more than Blue Steel. Then we went outside to make photo magic. First, though, Scott had to mess around on his 125cc mini-bike. A few model shots later, it was time to bounce on the trampoline and answer the cell phone.
Then it was over to the boat dock to pose some more. Big smiles while rocking the new shades? Never. Why? ‘Cause when you’re the “M,M,L” you don’t have to do anything you don’t want to. You just have to be. And if that means being a sunglasses cowboy in your driveway on a random weekday afternoon, then so be it.