BACK IN THE HOMELAND 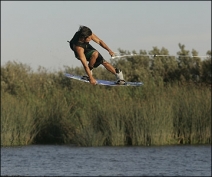 A week ago I embarked upon a road trip around my native Northern California with some of its local riders and first-time visitor Travis Propst. The purpose of this trip was to work on Volume 2 of the Nor Cal series and to get some footage for a segment in an upcoming episode of “Pull,” the new Alliance Wakeboard TV show on FUEL TV. All in all it was a good trip filled with some typical wakeboarding road trip stories. Comedy, adventure, mishaps, some serious gnar shredding – it was all there during our trip.

The mainstays of the trip were Aaron Aubrey, Derek Cook, Daniel Doud, and Travis Propst. We started off at Derek’s home lake in the south bay city of San Jose. There we met up with another local, Garrett Morris. From Anderson we took off to Lake McClure to spend a couple days kicking it on Mike Schwenne’s West Coast Camps houseboat. Along the way we stopped at the San Luis Reservoir and ran out of gas. Isn’t that a requirement for every wakeboarding road trip?

At Schwenne’s we met up with all the West Coast Camps boys, including Jared Couch, a knee-surgery-recovering Mike Buckle, Brad Larkin and Ryan Anderson. Nineteen-year-old Jr. Men’s rider Propst thought he’d died and gone to heaven when he found the candy drawers on the houseboat. Then he showed the Nor Cal boys he knows how to throw some style into his riding. Couch was a little TO’ed, but not because of Travis’ riding. Propst was caught taking a catnap with Jared’s stuffed monkey and that set off some childhood alarms.

Once our time was up at Schwenne’s it was off to the infamous Delta for a couple days. First we headed out to Stockton and met up with local Marc Castelanelli who seems to be back to ripping form after blowing out his knee a while back. He even broke out the big worm. From Stockton we headed out to Discovery Bay to meet up with Josh Smith and Arizona native Jimmy Wolf. Josh couldn’t ride because of a foot injury, but Jimmy was more than capable. His toeside backside 3 to switch wrapped toeside backside 3 (both grabbed) combo was a big hit among the Nor Cal crew. Mother Nature treated us with one of the most spectacular sunsets I’ve ever seen and we were all sentimental for a moment. On the last day we of course ran out of gas getting back to the dock at Disco Bay (can a road trip end any other way?). Fortunately we got a tow back in and made it home safe.

Be on the lookout for a story in Alliance and a segment on “Pull” with complete coverage of this somewhat crazy and extremely funny Nor Cal road trip. It’s gonna be hella sick, bro.