Liquid Force introduced another new board into the fold for 2022, and we think it’s safe to say it’s going to turn some heads, not only visually but also with its unique shape. The appropriately named “Illusion” has a unique graphic that is somehow loud and subtle at the same moment. This board’s visual uniqueness doesn’t end there; the Illusion also has two opaque windows on either end of the board that allow light to shine through. Those windows are coupled with a pronounced dip in the center of the board that is visually difficult to spot until you run your hand across it. This board also boast’s liquid force’s “Just The Tip Technology” which simply explained is the removal of unnecessary core in the tip and tail to reduce swing weight and ideally make the board be more responsive. The tip and tail also have a noticeable lip at the end that is intended to make the transition from feature to water smoother. At first glance we had some concerns regarding the Ollie of this board given this feature, but the Illusion ended up delivering yet again with no issues on the ollie front. The Illusion is also equipped with lifted rails and flex tracks making this board a true representation of innovation in the cable wakeboard market. 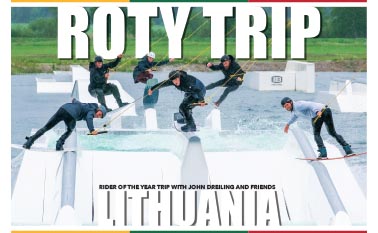