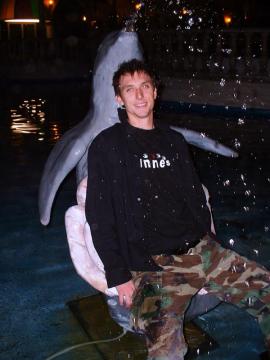 VP of Sales and Marketing

If Corey Marotta was a penis he would be erect all the time. He is excited almost every waking moment of every day. It’s safe to assume that you could make Corey a drink containing Zoloft, Paxil, THC and mushrooms, have the Swedish Bikini team serve it to him naked on the island of St. Croix while he was watching all five of his numbers and the Powerball popping up on the television screen and he would not be one ounce happier than he is, say, on a Thursday afternoon after eating a banana. Although at first he was thought too tall and fragile to be a wakeboarder, Corey wore a 10mm wetsuit to hold together his dainty bones and help him spring into action as a B-team rider for Hyperlite back in the late 90’s. During that time he also sold many boats to people that lived in a desert. Soldier-of-fortune, small arms specialist, bush pilot and commando, Corey is none of these things, but he has the outfits. At the end of his very long days selling ink on paper Corey retires to his ranch in Encinitas where he presides over a miniature koi pond and feeds frozen fish guts to a fancy colored shark. His teeth are impeccably clean.