I can’t believe the last decade in over and I still don’t know how to refer to it. The 00’s? The singles? Whatever. But one thing I do know is the the years from 2000-2009 will go down in history as the most influential decade in the sport of wakeskating. We saw it go from something else to do when you got bored wakeboarding, to a legit activity with it’s own brands, pros, and subculture within a subculture. So seeing as it’s now 2010, and a decade I will be calling the “teens,” I figured it would be a good time to look back. 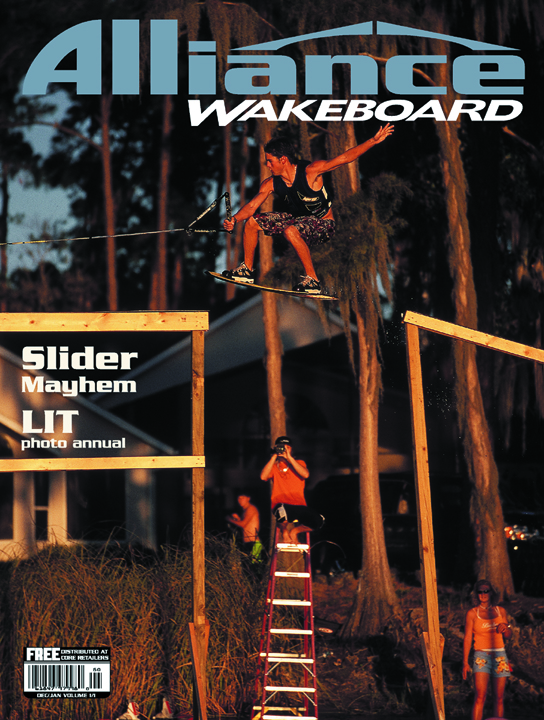 2000
-Alliance Wakeboard launches with Brian Grubb, wakeskating, on the cover

-Liquid Force and Cassette join forces
-Brian Grubb is the first wakeskater added to the Malibu Boats team and is the first wakeskater to be named Alliance Rider of the Year.
-Mutiny is resurrected from the dead and introduces it’s wood and composite line with a first UHMW sidewall and durasurf base
-DVS Introduces a wakeskate-specific shoe. The brand’s partnership with Thomas Horrell quickly makes them the official shoe of wakeskaters. Read more

-Cassette introduces the first concave wakeskate
-Aaron Reed wins the first-ever Alliance Wakeskate ollie contest
-Sattelyte gets its start as the first Canadian wakeskate company
-Grubb and Byerly have their first pro model wakeskates on Hyperlite. It’s around this time Byerly is seen much more often on a skate then strapped in, which really starts the process of legitimizing wakeskating as its own sport. 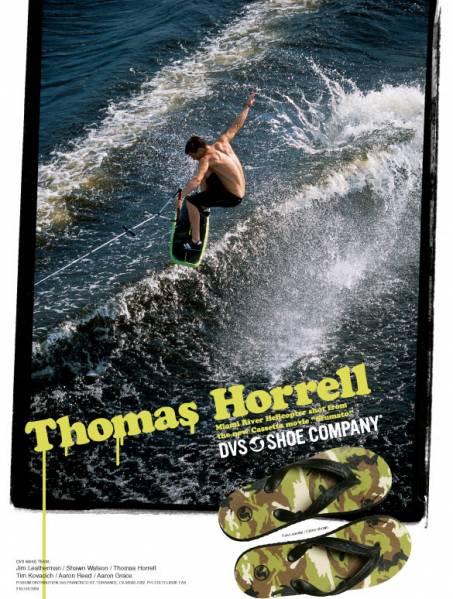 2003
-Cassette breaks away from LF
-Cassette introduces the 4-track, which allows wakeskaters to strategically fins for the first time
-The rewind Winch is pioneered by Thomas Horrell and Tony Robinson
-Sfumato comes out and is a concrete step in wakeskating divorcing itself entirely from wakeboarding.
-Danny Hampson is introduced to the world in his Sfumato section – he is technically the first “pure wakeskater,” not known as a wakeboarder before breaking into the scene. His unedited lines in the movie redefined the concept of linking tricks.
–Wakeskating.com launches in September, creating the first real online community specifically for wakeskating
-Reef puts out the Scott Byerly wakeskate shoe. Also on the market were 3 Thirteen wakeskate shoes, with holes drilled in the soles to let water drain out.
-The Pro Wakeboard Tour adds Wakeskating
-Aaron Reed is the golden boy of the year. He works with Bump Films to put out the first wakeskating instructional DVD “Snap,” wins Alliance’s Rider of the Year award, and brings some much needed style to wakeskating. 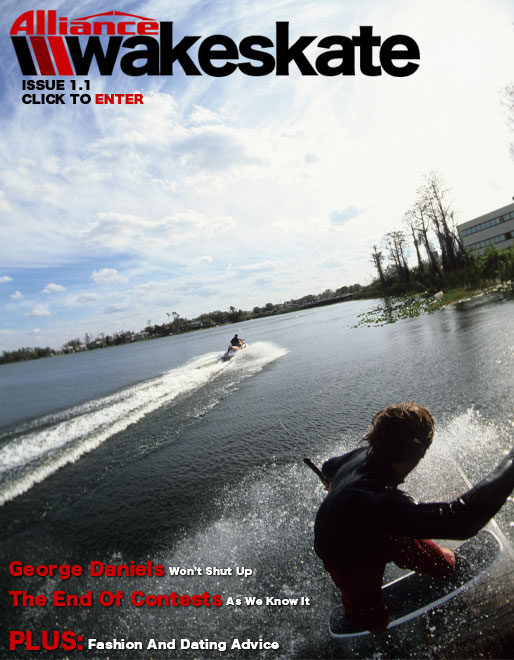 -The bi-level is introduced by Cassette
-Alliance Wakeskate issue 1.1 is released in September.
-Aaron Reed officially joins LF, much to the dismay of Cassette hardcores
-Hippodrome, a wakeskate event put up by Collin Wright and Silas Thurman, is held in Washington
-An unknown named Nick Taylor gets sponsored by Integrity 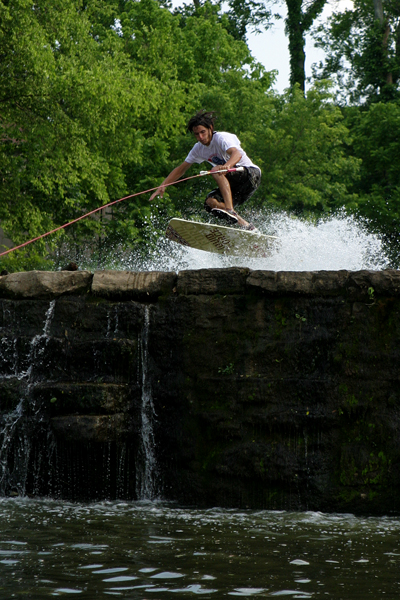 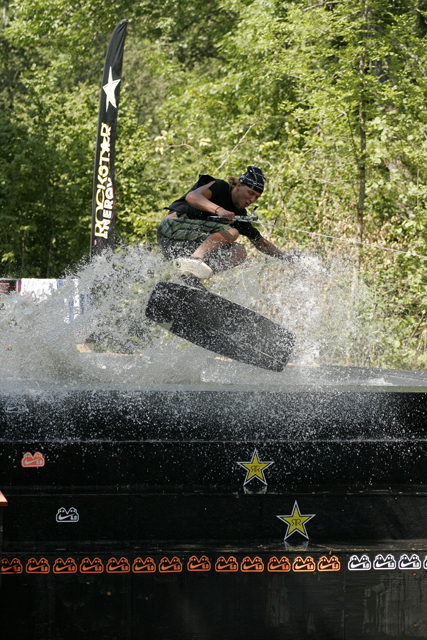 -Wakeskating is cut from the pro tour. We all cry ourselves to sleep.
-Toe Jam hits the road and adds cable competitions
-Hippodrome becomes a stop on the Toe Jam tour
-Scene One releases it’s first effort, Esoteric
-Wakeskate Life Magazine launches and puts out 3 issues
-Integrity builds the first Urethane sidewall skate

-The Toe Jam goes international, with a stop in Wasaga Beach Canada
-Liquid Force contracts Danny Hampson and Aaron Reed to start Obscura, marking the essential rebirth of a rider-run companies.
-Wakeskate blogs explode, as riders start to take things back into their own hands.
-Nike 6.0 puts on Raging Pull, digging a pond and building a winch gap in Ben Horan’s backyard to do so. The second event was held at Steele Lafferty’s house later that summer, but it’s the first event that will truly go down in wakeskate history.
-Aaron Reed win’s favorite wakeskater in wakeworld.com’s rider’s choice awards, the first and only time since 2001 the award hasn’t gone to Brian Grubb.
-Danny Hampson wins Alliance ROTY honors
-Mutiny is resurrected from the dead, again.
-Reed Hansen becomes the second person to sweep three Toe Jam events in one stop– Cable, Boat and PWC. 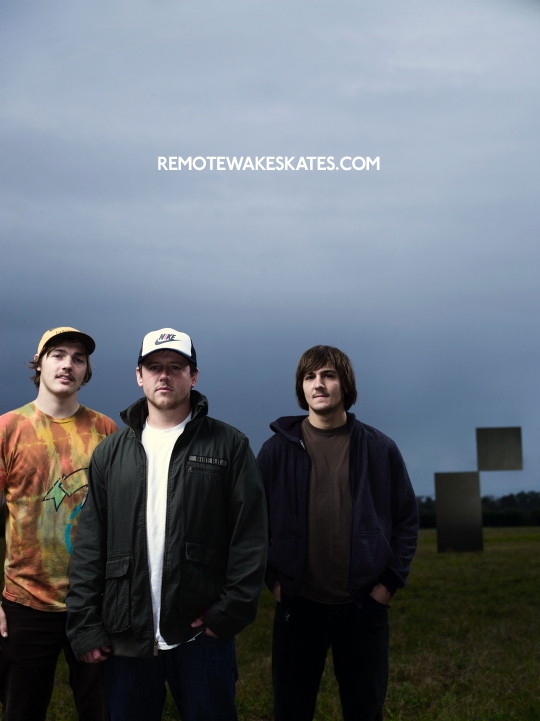 -Company introduces Remote Wakeskates
-Fun Boots! comes out with a double-ender from Andrew Pastura.
-Nike 6.0 drops Aquafrolics and subsequently holds the biggest wakeskate party, ever. Sections from Andrew Pastura, Ben Horan, Matt Manzari and Nick Taylor define skateboarding on water.
-Rider-run is the theme of the year. Clint Tompkins starts his own brand, Signature Wakeskates and John Ruark tries his hand with Wood Works.
-Clint puts on the Trinity River Round Up, the first event held on a natural gap
-Blast Wakeskate Magazine Launches