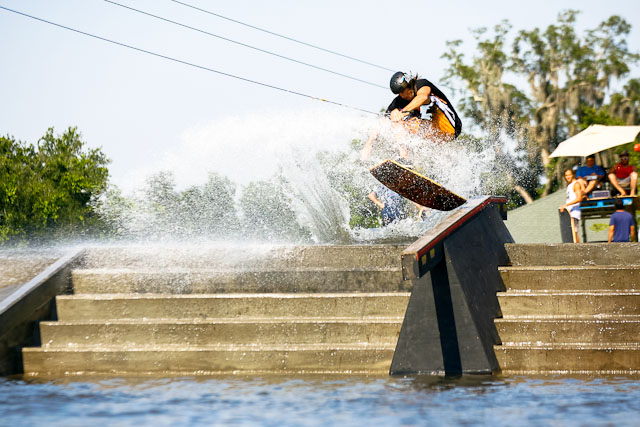 Yesterday was the official unveiling of Battle Falls brought to you by Reed Hansen and the Wakeskate Tour. As we watched the riders practice for qualifying rounds (which officially start today, Friday) we decided that Battle Falls is the most legit set-up ever built for wakeskaters. From the size of the pools to the water pump to the perfectly manicured grass that lines the shores, the guys really went all out on this one. The overflow ramp is the first of it’s kind for a wakeskate contest, so we’re excited to see what it will bring to the table as the weekend progresses. The wildest thing about this build is that it’s now a permanent fixture in the front yard of Reed Hansen’s home, so you can bet some crazy sh%t will be going down in these pools from this day forward.

On Thursday the Wakeskate Tour also hosted a wake to wake contest on Reed’s home lake in which 10 skaters were given 4 passes to put together the best 3 trick combo. Reed, Balzer, BT and George Daniels made it to the final 4 putting together some solid lines behind the Supra boat. The champion will be crowned at the end of the weekend, along with the winner of the pool sessions. It’s an exciting two days that lie ahead, so stay tuned to Alliancewake.com for all the updates.