2010 Alliance Superlatives – Video Performance of the Year: Danny Hampson & Grant Roberts – Washed Up Before We Were Has Beens 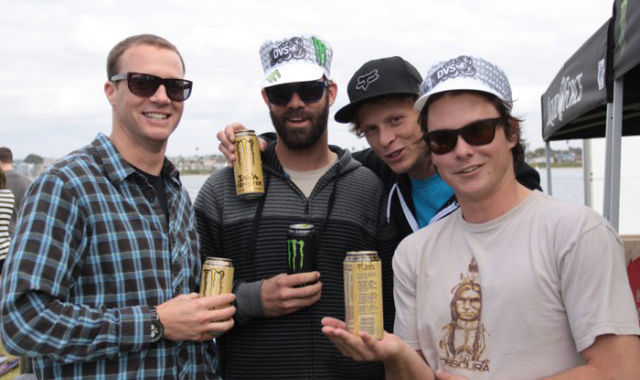 Danny, Grant and the guys who helped make it all possible! And Monster Java, which also helped! photo: Rusty Manoff

For the first time ever in the esteemed history of everything Alliance Superlative, we have a tie for a video section award. Washed Up Before We Were Has Beens was the feel-good wake video of the year with a sort of indie twist. It was apparent the Obscura crew were out on their own making this video happen themselves; from the trips, to the riding, to the filming and editing, they were in charge of it all. To see the riding that went down in this video is mind-boggling. Each guy made his presence felt in his own unique way, but two guys stood out above the rest. They actually stood out about equally, to the point where we couldn’t choose just one. So this year’s award goes to Danny Hampson and Grant Roberts, both of whom are very deserving. Danny and Grant’s sections are full of insane trickery that will leave you both wanting for more and wanting to quit because you know you’ll probably never be able to do what they do, the way they do it. In the end, that’s what sets the best video performances apart from the rest: inspiring the viewer to the point of disbelief. Props to Danny and Grant for doing it together in one video that inappropriately labels them as “washed up.”